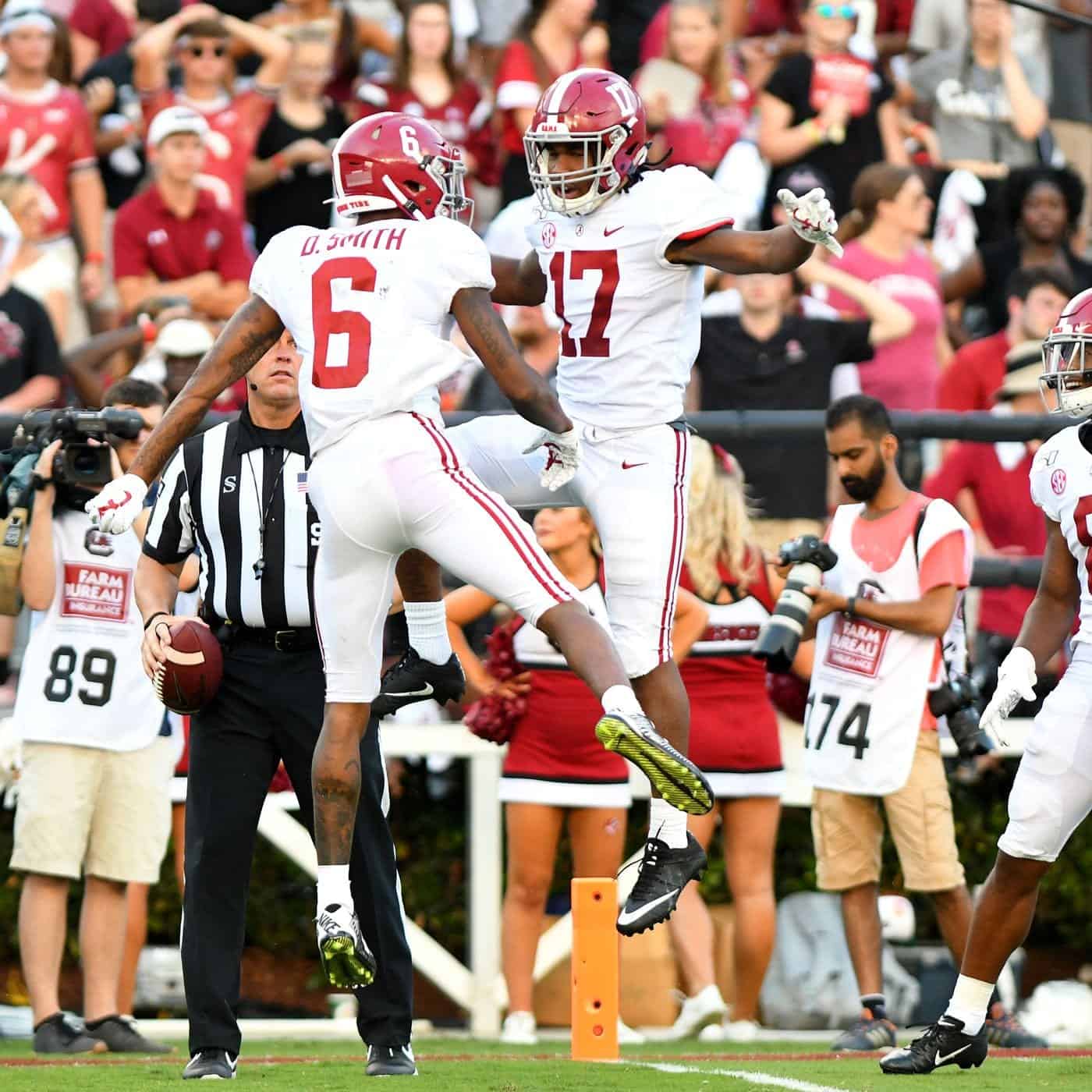 Photo Credit: Getty Images
What's in this article? Click to show
High school stars to the first round?
Waddle and Smith join the elite prospect mix
Next great Alabama receivers in the 2021 NFL Draft

The 2020 NFL Draft is less than a week away, and there is some serious intrigue surrounding two of the top draft-eligible receivers, Alabama’s dynamic duo of Jerry Jeudy and Henry Ruggs III. Both players have star qualities and are virtual locks to hear their names called within the first 20 picks on Thursday night. Alabama is a wide receiver conveyor belt of revolving excitement and upside, and that continues in the 2021 NFL Draft with DeVonta Smith and Jaylen Waddle.

Each of these players possesses the speed, agility, and playmaking potential of Ruggs and Jeudy. They are also considered players that could crack the top of the draft. Smith stepped into the forefront of the Alabama offense in 2019, showing the college football world he is a proven playmaker, while Waddle flashed on offense and special teams. In 2020, these two are ready to prove they have the potential to become top-20 picks as well, and I break down that possibility below.

High school stars to the first round?

When it comes to being highly-touted and heavily sought-after prospects, the evaluation process is nothing new for this quartet of Alabama receivers. Jeudy, Smith, and Ruggs were all considered top-20 receivers in 2017 according to most major scouting outlets as a result of their dominant high school performances. In 2018, Waddle was tabbed as a top-seven receiver and top-32 player overall by Rivals.com.

In addition to being stars at the prep level, two other common denominators that each of these players have shared is early playing time and an immediate impact on the Crimson Tide offense. All of these receivers saw significant game action during their freshman years while playing in almost every game since. The 2020 NFL Draft hopefuls, Jeudy and Ruggs, were two of quarterback Tua Tagovailoa’s favorite targets before the 2019 season. However, it was Smith who stepped to the forefront of the Alabama offense last season and led the team in receiving yards and touchdowns.

Smith is a player that first received national notoriety as the freshman receiver who caught the game-winning touchdown from Tagovailoa in overtime of the 2018 National Championship win over Georgia.

He was a steady contributor in 2018 before breaking out for over 1,200 receiving yards and 12 touchdowns in 2019. This Alabama offense was explosive in 2019, as Smith and Jeudy combined for over 2,300 receiving yards, while Ruggs remained a big-play threat, and Waddle contributed with timely special teams scores.

While Jeudy and Ruggs always seemed destined for the 2020 NFL Draft, Smith was a player mentioned as a possible early entry as well. However, in the end, it was only Jeudy and Ruggs that declared while Smith returned to Alabama to team up with Waddle on another seemingly explosive Alabama offense in 2020. Juniors Ruggs and Jeudy could be selected as early as the top-13 picks, while Smith and Waddle will wait another year to stake their claim on the top of the 2021 NFL Draft.

During the 2019 season, Waddle was a part-time player on offense and electric kick/punt returner for the Crimson Tide. However, with receivers Jeudy and Ruggs off to the NFL, Waddle will join Smith in the Alabama starting line-up and first-round mix for the 2021 NFL Draft. Back in February, I discussed both players as two of my top-five players at the receiver position for the draft next April. We know that Smith is capable of elite numbers in this Alabama offense, but Waddle is a big question mark as a full-time starter. Despite those questions, he possesses some of the highest upside of any player eligible for the 2021 Draft.

The most significant disadvantage facing Smith and Waddle this season is that they will not have the luxury of Tagovailoa throwing them the football. Tagovailoa is off to the NFL, and Mac Jones is the likely starter for the 2020 college season. Jones started the final three games last season after Tua suffered his season-ending hip injury against Mississippi State. The former four-star recruit, Jones, led the team to a 2-1 record, including a 35-16 drubbing of the Michigan Wolverines in the Citrus Bowl game.

Jones showed a decent rapport with these receivers during his time in the line-up last season, posting 1,503 passing yards and 15 touchdowns with only three interceptions. Waddle scored four of his six touchdowns with Jones as the quarterback for Alabama last season, including three against the rival Auburn Tigers. Smith wasn’t quite as impressive, but still managed to catch three touchdowns from Jones and those numbers should only improve with another year together in the offense.

Next great Alabama receivers in the 2021 NFL Draft

Just as Jeudy and Ruggs have done during the evaluation process, Waddle and Smith will look to wow NFL decision-makers and fans this college season, and well into the draft season. The pre-draft testing has only confirmed the elite prospects and receivers that Alabama has produced for the 2020 Draft, and it should be more of the same for the 2021 group as well. Waddle and Smith should be among the fastest players available next season, and that speed should guarantee a seat in the green room on the draft’s first day.

In terms of an NFL comparison for these two, some obvious Alabama counterparts contain the same aspects of fluidity, agility, and electricity to their game. Still, I will attempt to go outside the box here for Waddle and Smith. Waddle is a similar player to Ruggs; however, I also see a bit of Tyreek Hill in his game. The Kansas City star is an excellent receiver, return man, and utility player for the defending Super Bowl champion Kansas City Chiefs. Kansas City attempts to get the ball in Hill’s hands in many creative ways to utilize his speed on offense.

This utility, all-purpose method, is something you can see at times with Waddle in the Alabama offense and could be intensified in 2020 until the team decides to unleash Mac Jones’ arm to the fullest extent. He will receive handoffs on end-around plays and catch short screens as a way to create scoring plays using Waddle’s great short-area quickness, agility, and explosive speed. He will also occasionally be allowed to take the top off the defense, just as Hill does for Kansas City multiple times throughout the season. Waddle is a dynamic playmaker when he gets his hands on the ball, and he wastes little time getting to top speed, as evidenced below.

As you can see in the video, Waddle does tremendous work out of the slot as well and can score from anywhere on the field. If Alabama uses Waddle correctly in 2020, the sky is the limit for his production and talent, and you could see a legitimate breakout season for number 17.

A comparison that fits well for Waddle’s counterpart, Smith, is Stefon Diggs of the Buffalo Bills. Both players rely heavily on their speed to get behind defenses and make game-changing plays. Smith’s ability to stop and start on a dime to blow past defenders is something that Diggs has mastered in the NFL. Smith is also an excellent route runner that uses subtle fakes to bate defenders. He has an electrifying release, and if the defensive back gets caught peeking at all, the play is already over.

If Smith can find a team with a quarterback that executes well-timed throws, he could be extremely deadly as a pro. And like Waddle, Smith also excels in the short passing game and can easily separate from defenders. One of the more underrated aspects of his game is his outstanding ability to locate the football in the air. For a slighter receiver prospect, Smith does a great job tracking the ball and going up to make the play with his strong hands.

These two 2021 prospects may not receive all the media attention that their 2020 predecessors do, but that is only a matter of time. They possess the talent to shake up the SEC in a big way this season and make their presence felt on the draft scene as well. This Alabama duo of receivers, Waddle and Smith, will be household names in the 2021 NFL Draft and potential top-15 picks when the dust settles.