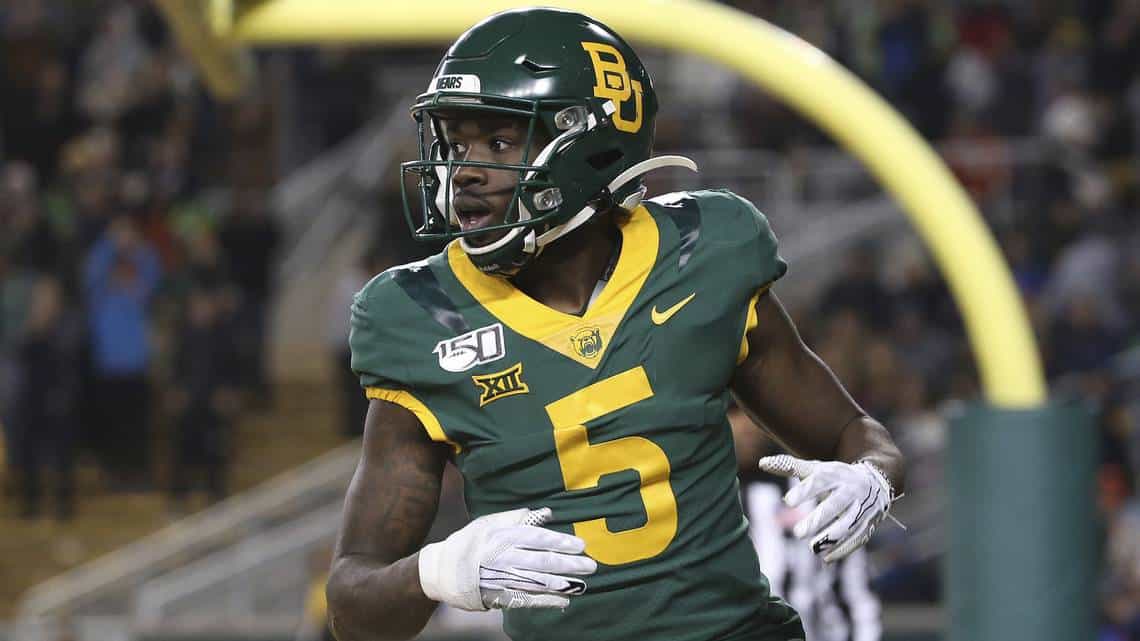 The 2020 NFL Draft’s wide receiver class is one of the most talented in recent memory. I thought last year’s draft was the deepest I’ve ever witnessed, but 2020 is a step above. This class possesses elite talent at the top and NFL-caliber depth in the later rounds as well. There is a good chance a player or two will likely go undrafted due to the talent at this position. It is so talented that I put together this list of 50 players to get a complete picture of the wide receiver landscape.

I’ve previously ranked my top 20 offensive tackles. PFN Senior Draft Analyst Tony Pauline released his wide receiver rankings as well, which I encourage you to check out. Please note that these are my personal rankings. These are not Pro Football Network’s official rankings nor should they be confused with Tony Pauline’s grades.

1) CeeDee Lamb, Oklahoma (Top 10)
Taking the top spot in my wide receiver rankings for the 2020 NFL Draft is Sooner stud, CeeDee Lamb. I’m not sure there isn’t anything Lamb can’t do on the football field. He checks off pretty much every box an evaluator can have – size, speed, route-running, hands, blocking, toughness, and no medical red flags. Lamb is as well-built and safe as they come. He has all the talent to be a WR1 for whatever team drafts him and can become a Pro Bowl-All Pro talent within his first few seasons.

2) Jerry Jeudy, Alabama (Top 10)
Jeudy came within a few decimal points of taking the top spot from Lamb, but I’m just as confident in Jeudy’s evaluation as I am with Lamb’s. Jeudy combines crisp and clean route-running with excellent speed to threaten defensive backs deep. He had some minor drops on tape that I had to note, as well as a past meniscus injury, but there’s nothing in his profile that suggests he can’t be a WR1 for his future team.

3) Henry Ruggs III, Alabama (Top 15)
Let’s dispel the notion that Ruggs is simply a speed player. That’s just a foolish notion at this stage of the draft season. Any relation to John Ross starts and ends at the reference to their sub 4.3 40-yard time. Ruggs has the potential to be the best playmaker in this draft class, which is why he ranks so highly on my list of top receivers in the 2020 Draft. There’s been a lot of overthinking with Ruggs and his playmaking. My advice? Give him the ball and let him use his speed to his advantage.

4) Justin Jefferson, LSU (First Round)
Count me fully in on Justin Jefferson, especially after he tested better than expected at the NFL Combine. Jefferson was Joe Burrow’s best friend this past season, using his athleticism and phenomenal catch radius to his advantage. It seems like Jefferson caught every pass Burrow tossed his way. He reminds me a ton of Keenan Allen, but further refinement of his route-running and ability to beat press will be required to reach that level of play.

5) Denzel Mims, Baylor (First Round)
I’ve been a fan of Mims’ game for so long that seeing him being considered a first-round pick makes me feel like a proud father. Mims is the prototypical height/weight/speed prospect that the NFL loves, and his NFL Combine performance cemented his stock. The catch radius that Mims produces with his explosiveness and length is nearly jaw-dropping on film, not to mention his legit 4.3 track speed to threaten defenses over the top. Mims has true WR1 upside in his future with refinement of his concentration drops.

6) Jalen Reagor, TCU (Top 50)
Lots of people will be higher on Reagor than I am because of his speed, which is understandable despite his combine performance. Reagor has a few critical areas he has to fix in his game before he can be a WR1 at the next level, but for a playmaking WR2/slot threat, Reagor checks a lot of boxes.

7) Brandon Aiyuk, Arizona State (Top 50)
Aiyuk is a polarizing prospect among analysts. Tony Pauline has Aiyuk with a fifth-round grade, while I have him in the top-50. Senior Bowl Director Jim Nagy said many NFL scouts have Aiyuk graded higher than teammate N’Keal Harry, and I am among them. Aiyuk is a better route-runner than many give him credit for, and his catch radius and speed give him a deadly combination of skills that will translate to the next level. Aiyuk has improved every year in the collegiate ranks, which suggests he can reach his upside.

8) Laviska Shenault, Colorado (Second Round)
This ranking could burn me for being too high or too low on Shenault. We just don’t know which Shenault the NFL will get. His film grade is top-50 because he’s a true freak of a wide receiver prospect with incredible upside, but the injuries are too numerous to ignore. Will he be a Julio Jones-esque receiver or early Sammy Watkins? Time will tell.

9) Michael Pittman Jr., USC (Top 75)
When I initially ranked Michael Pittman Jr. in my top wide receivers for the 2020 Draft before the combine, I had questions about his true deep speed and quickness. Pittman’s an excellent contested-catch receiver who had some surprisingly snappy routes on film, but I wondered just how explosive and fast he was. A 4.52-forty at 223 pounds helped answer that. I don’t think Pittman can ever be a WR1, but he is a true “X” WR2 receiver that should be a quarterback’s best friend at the next level.

10) Tee Higgins, Clemson (Third Round)
Higgins is a perfect height/weight/speed receiver prospect, if only we knew he had the speed. Much like Pittman, I had questions about Higgins’s speed and quickness. He decided not to participate at the combine, adding even more questions to my evaluation.

14) Lynn Bowden Jr., Kentucky (Third Round)
Despite mostly playing quarterback for Kentucky this season, Bowden Jr. graded very high in this list of my top wide receivers for the 2020 NFL Draft because of his playmaking ability. He’s excellent after the catch and highly competitive on the field. Bowden is electric and has excellent speed to threaten defenses vertically. I wouldn’t play him outside a ton, but his athletic gifts and playmaking are too valuable to ignore.

17) KJ Hill, Ohio State (Fourth Round)
KJ Hill has a lot of fans, but I’ve got too many athletic questions for him to grade any higher than Day 3 for me. He does a lot of the little things phenomenally well with his route-running, releases, and his catching ability, but he doesn’t separate off press well, and he’s a one-speed deep receiver with poor explosiveness. He’s a valuable slot receiver at the next level, however, which should see him be drafted fairly early on Day 3.

20) KJ Hamler, Penn State (Fourth Round)
I’ve seen Hamler ranked atop many people’s wide receivers rankings of the 2020 NFL Draft, and I just don’t see it quite yet. Hamler is electrifyingly fast and dangerous on the field. I just cannot trust him when the ball is in the air. Hamler struggled to track and catch the ball at times, limiting his value. He has the ability to be a top-notch playmaker for a team, but he has to improve in that area for him to be a legitimate threat.

28) Dezmon Patmon, Washington State (Fourth Round)
6’4, 225 pounds running a 4.48 40-yard dash? Scoring in the 95th percentile in the broad jump? A standout performer in contested-catch situations? Dezmon Patmon may just be the most underrated player in my top wide receivers of the draft rankings. His route-running, coming from a Mike Leach Air Raid offense, is in need of work, but Patmon can be an instant WR3/vertical threat with room to grow.

31) Antonio Gandy-Golden, Liberty (Fifth Round)
Gandy-Golden is an excellent contested-catch receiver. That’s all there is with Gandy-Golden, however. He doesn’t offer a lot of exciting traits with his athleticism or route-running and doesn’t possess a ton of upside. Let him excel as a WR4 or 5 in red-zone situations, but I don’t see anything more for him in the NFL.

43) Jauan Jennings, Tennessee (Seventh Round-UDFA)
Jennings has his fans in the draft community but doesn’t move the needle for me as much as others. He’s violent after the catch with good size and hands, but he doesn’t offer much of a threat otherwise. Jennings seems like a limited player at the next level but could be a backup “big-slot” receiver with further refinement.

AJ Schulte is an NFL Draft Analyst for @PFN365. You can follow him on Twitter @AJDraftScout for more draft content, and to give him your feedback on his rankings of the top wide receivers in the 2020 NFL Draft.