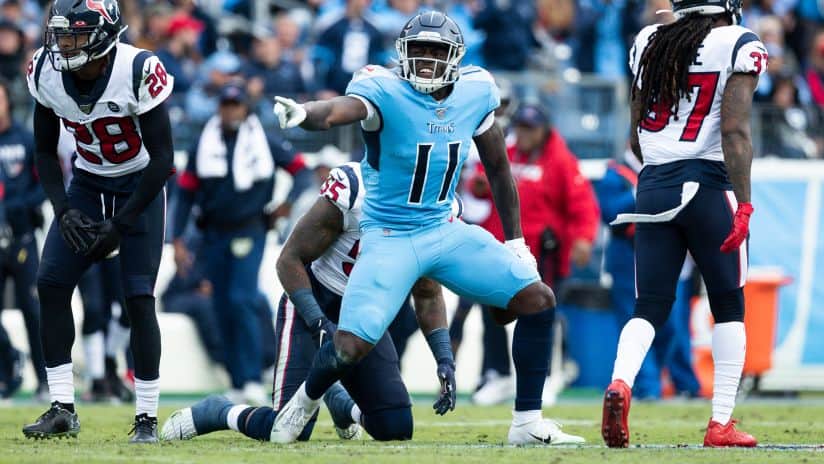 Tennessee Titans wide receiver A.J. Brown became a fantasy football phenomenon at the end of last season. The 51st pick of the 2019 NFL Draft led all rookies in receiving yards and put up double-digit points each week of the fantasy football playoffs. His performance against his division rivals helps explain who he was as a rookie, and who he could be in his second year. It can also help tell us what A.J. Brown’s fantasy outlook is for the 2020 season.

If there was one team that managed to contain Brown last year, it was the Colts. In the Titans combined meetings with Indianapolis, Brown totaled six receptions on nine targets for 70 scoreless yards. During the Week 2 matchup, Brown was catching passes from Marcus Mariota in a completely different looking Titans offense.

By the time Week 13 rolled around, quarterback Ryan Tannehill was at the helm, but this game, in particular, was a rough one for him. Tannehill completed 17 of 22 passes for under 200 yards and two touchdowns. He was consistently under pressure and sacked a season-high six times. Due to this, Brown could not work deep and was effectively bottled up.

Readers might think this poor performance from the passing game resulted in a loss for the Titans. However, the run-heavy approach from Tennessee saw running back Derrick Henry receive 26 carries, which he promptly turned into 149 yards and a score, keeping the game in control and assisting a 31-17 win.

Brown vs. the Jacksonville Jaguars

In a similar fashion to his fantasy production against the Colts, A.J. Brown’s fantasy production fared much better in his later meeting with the Jaguars. His Week 3 trip to Jacksonville only resulted in one catch for four yards on five targets. Once again, with Tannehill under center at home in Week 12, the picture changed. Brown turned another five targets against the Jaguars into four receptions for 135 yards and a touchdown.

This game saw Brown and the Titans fresh off of a bye week and was the first of four times Brown averaged 30 or more yards per reception to close out the season. If we were curious as to how the rushing offense performed, Henry took 19 carries for 159 yards and two touchdowns.

Related | The Terry McLaurin fantasy domination of the NFC East

The concerning part is that it is all about how efficient Brown is with a limited workload. More than that though is how efficient Brown was when factoring in how infrequently the Titans passed on occasion. In that Week 12 matchup, Tannehill only threw 18 passes. Brown saw 28% of targets and receptions in this game, which he rewarded by totaling 52% of the receiving yards. You don’t even need to know how to work a spreadsheet to realize that type of pace cannot be relied on week by week.

To call A.J. Brown’s fantasy production against the Texans a bright spot in his rookie campaign would be an understatement. Brown totaled 100 yards receiving in each meeting and put up a combined stat line of 21 targets, 12 receptions, and 238 yards, amounting to 47.8 PPR fantasy points.

Most fantasy football players won’t remember the second game against the Texans as it came in Week 17. Still, the production is incredibly encouraging and speaks to his particular focus in the passing game once the Titans exited their bye week. Two matchups with Houston, who allowed the fourth-most passing yards last season, definitely helped close things out in a big way.

With an incredibly exciting finish to 2019, the football fan in all of us wants to see Brown begin 2020 at that same pace. Still, we know things will come back down to earth, and Brown will need more volume. Over the last 20 seasons of NFL football, only six times has a receiver passed 1,000 yards receiving while averaging over 20 yards per reception. The only player to repeat that feat was DeSean Jackson.

All of this is to say we just saw an incredibly specific accomplishment from a rookie on a low volume passing offense. Those qualifiers need to dissipate for Brown to return the top end production he is capable of year after year.

Brown’s current FleaFlicker ADP of 42nd overall and WR16 assumes the Titans will figure that out this year. If they do not, dynasty league players may enjoy a brief buying window in the offseason.