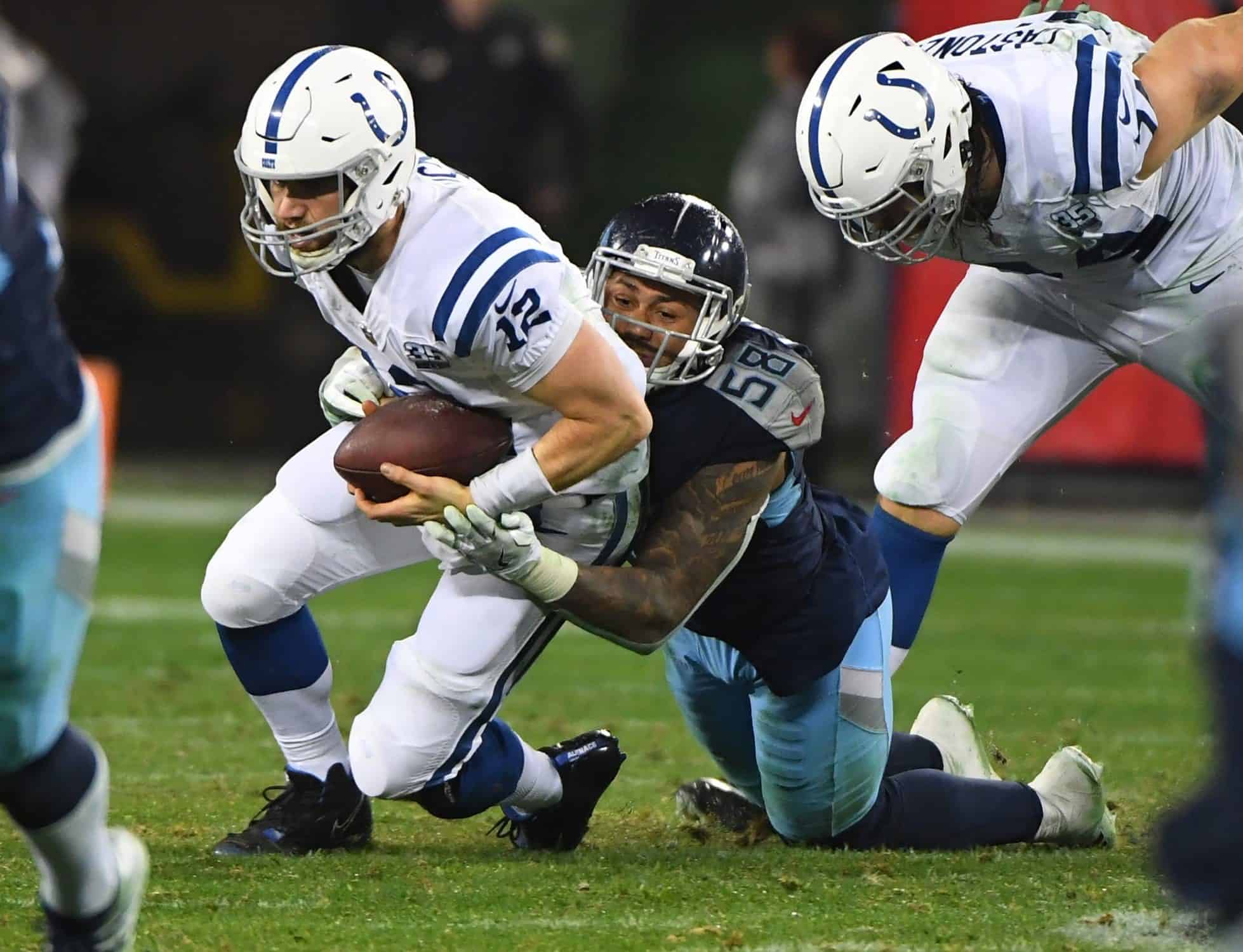 It’s hard to argue another division in the NFL had more rookie production than the AFC South. Not only did the Colts have Defensive Rookie of the Year winner Darius Leonard, but they had arguably the best rookie offensive lineman of all-time in Quenton Nelson. Leonard and Nelson have already solidified themselves as two of the best players in the AFC South, but who’s ready to join them? There are plenty of second-year players in the AFC South poised for big seasons, and these are the five ready to make the biggest leap.

In the 2018 NFL Draft, the Texans didn’t pick until the third round. Lucky for them a first-round talent tumbled to them and with the 68th overall pick, they stole Justin Reid. Reid was a do it all player for Stanford. He played everything from single-high safety to cornerback to nickel to dime linebacker.

That versatility was exactly what the Texans secondary needed and he flashed it as a rookie. Last season Reid started 12 games and tallied 88 tackles, 10 pass breakups, and 3 interceptions. It was one of the best rookie seasons, but he’s got more in the tank.

Reid’s growth in his second season could be the key to the Texans’ defensive success. Nobody is questioning the talent in their front seven. It’s one of the best in the league. The secondary, however, is full of issues. Reid is by far the most talented player Houston has on the back-end and taking advantage of his versatility is the best way to get the most out of him and the rest of the secondary.

Reid has the size and athleticism to match up with AFC South tight ends or slot receivers and using him as a chess piece is the best move. With great instincts, a physical style of play, and impressive athleticism, Reid can be Romeo Crennel’s version of Derwin James.

It was very on-brand of the NFL to let Harold Landry fall to the Titans at the 41st overall pick. Explosive pass rushers with elite bend aren’t easy to come by, but Landry’s lack of size scared the NFL off of taking him in the first round. That was fine with the Titans, who needed to boost their pass rush to get to talented AFC South quarterbacks like Andrew Luck and Deshaun Watson. Landry started off hot as a rookie in a situational pass-rush role but cooled down the stretch. He finished his rookie season with 44 tackles, 5 TFLs, and 4.5 sacks in three starts.

Brian Orakpo and Derrick Morgan retired and it is Landry’s time to shine. The only proven edge rusher on the roster is Cameron Wake, and he’ll likely be on a pitch count in a situational pass-rush role. That means tons of playing time for Landry.

If Landry can improve vs. the run, then the Titans will have no reason to take him off the field. His first step and flexibility are what teams covet in a speed rusher. He needs to develop a consistent counter move and become more consistent with using his hands, but his speed rush is his trump card.

The Colts had one of the best rookie classes in recent memory. There’s an argument to be made that Braden Smith “made the leap” in his rookie season. The second-round pick out of Auburn started 13 games at right tackle for the Colts. He helped turn the Colts offensive line into one of the most improved in the league, and the best in the AFC South.

Smith was overshadowed by the dominance of fellow rookie Quenton Nelson, but don’t sleep on what he did in his first season. Per PFF, Smith allowed just four sacks and 38 pressures in 601 pass-block snaps as a rookie.

Not only was Smith one of the best rookie offensive linemen, but he was making a transition to right tackle on the fly. He played right guard for the majority of his college career and was thrown into the fire as a rookie.

With his size and explosive athleticism, he fits right in as a tackle and brings a nastiness to the position. Having a trio of Smith, Nelson, and Ryan Kelly gives the Colts one of the best young offensive line groups in the league. With the growing importance of having your right tackle being just as athletic as your left tackle, this is the perfect time for the Colts to find a player of Smith’s abilities.

The 2018 NFL Draft worked out well for the Texans even with their lack of picks. Not only did they find a versatile high upside DB in Justin Reid, but they got the perfect slot receiver for their ascending offense. Keke Coutee only played in six games, with two starts, but caught 28 passes for 287 yards and a score in those games. Coutee was used a ton on bubble screens and short passes to take advantage of his YAC ability. He saw 41 targets in those games and clearly, Bill O’Brien has big plans for him.

The Texans only had Coutee for just over a third of the season, but they were not shy about how involved they wanted him to be as Deshaun Watson’s slot. His abilities perfectly complement the dominant contested-catch skills of DeAndre Hopkins and the deep threat speed of Will Fuller.

If he remains healthy in year two, he should become one of the most targeted slots in the league. His elusiveness in the open field, crisp route running, and overall explosiveness is exactly what the Texans need to take their offense to the next level. With Hopkins being keyed in on and Fuller stretching the field, Coutee should feast underneath in the AFC South.

Every NFL Draft season there’s a handful of prospects whose names are buzzing as potential first-round talents, but they fall down the board. Ronnie Harrison fell to the Jaguars at pick 93 despite his impressive career at Alabama. The knock-on him was his lack of football IQ and overall lower ceiling than some of the other DB prospects. He may not have the highest ceiling, but he showed in his rookie year he’s got a very high floor. In his rookie year, he started eight games and finished with 32 tackles, 3 pass breakups, and an interception.

Harrison is known for his blue-collar work ethic and playing-style. He’s ultra-aggressive and uses his size to be an enforcer on the back-end. In his rookie season, he showed off his ability to use his size and physicality to match up with tight ends. Think of him as a Keanu Neal type of safety. By the end of his rookie season, it was clear he was the Jaguars best safety.

In his second year, Harrison should see a major increase in production. With one of the best defensive lines in the NFL in front of him and the best cornerback duo in the league beside him, if Harrison can take his play up a notch, he’ll have plenty of play-making opportunities. The biggest question for the Jaguars will be finding out which safety is playing next to him.