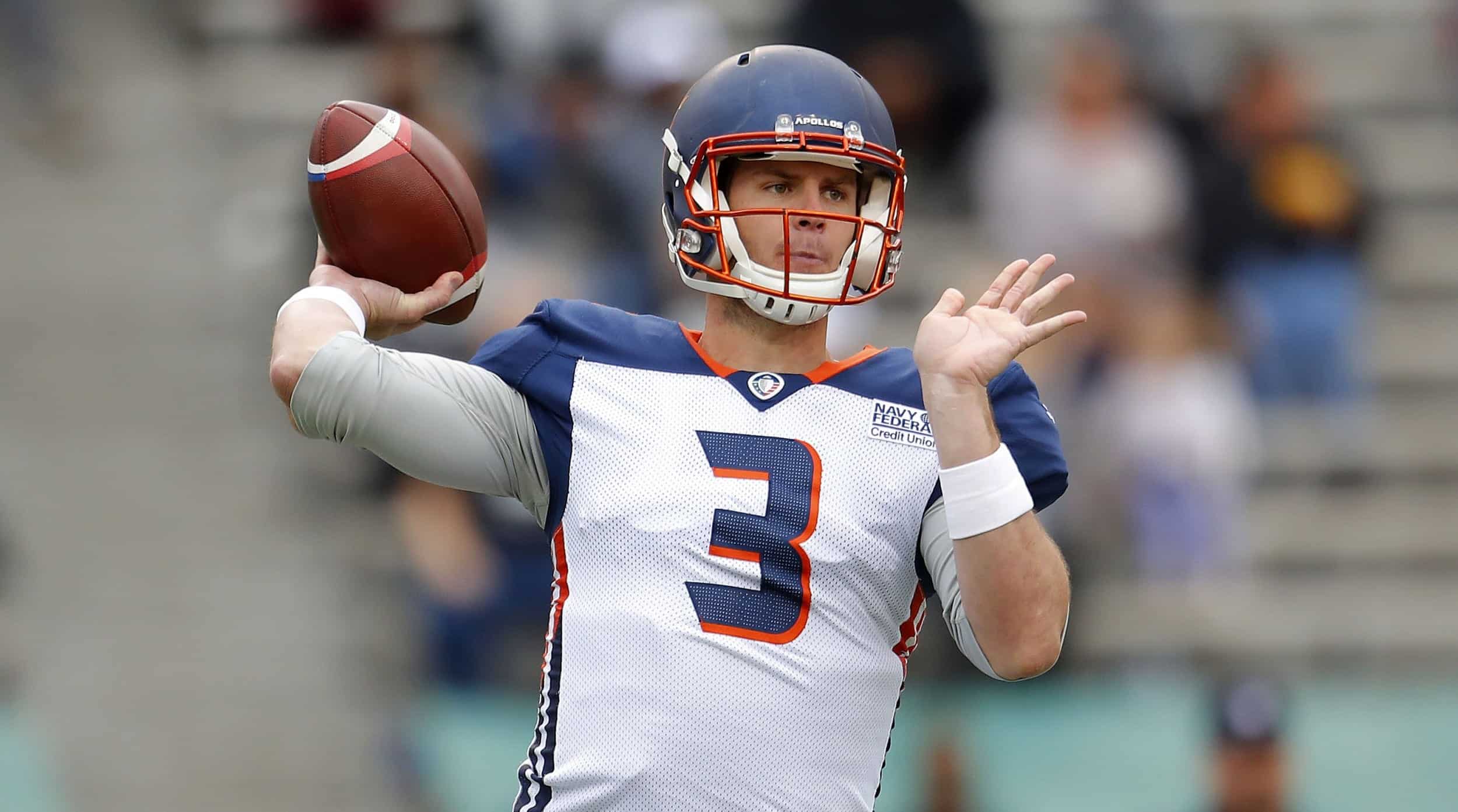 Photo Credit: Sports Illustrated
What's in this article? Click to show
When the AAF league fell through, Las Vegas had an over/under of 1.5 players being signed to the NFL. As of Saturday, April 12th, 45 players have been signed.
Rashad Ross
Rashad Ross (continued)
Garrett Gilbert
Luis Perez
Karter Schult
Conclusion

When the AAF league fell through, Las Vegas had an over/under of 1.5 players being signed to the NFL. As of Saturday, April 12th, 45 players have been signed.

Coming into the beginning of the AAF league, only a few players had their names ready to be on NFL teams’ jerseys by the end of the year. But, with many players leaving, retiring or being traded, it leaves open spots on these NFL teams. Although the AAF didn’t last a full season, it gave scouts and coaches enough film to pick out the “farm” players from the AAF.

As of right now, each team has had at least two players signed. Four NFL teams have signed at least five former AAF players. Most of these players may be third stringers, practice squad players, or cut later on in the year. Some of them, however, will have the opportunity to fight for either a backup role or considerable playing time.

There are several decent players that can make a run for playing time. There are four players, in particular, that are building up hype since the fall of the league. These players are Minnesota Vikings defensive end Karter Schult, Cleveland Browns quarterback Garrett Gilbert, Philadelphia Eagles QB Luis Perez, and Carolina Panthers wide receiver Rashad Ross.

In this article, we will see if these hotshots can live up to the hype or bust out in the big league.

Ross finished the eight-game season with 36 receptions, 583 yards, and 7 touchdowns as a member of the Arizona Hotshots. He led the AAF in touchdowns and was second in yards. According to Pro Football Focus, Ross had an offensive production of 83.2, second highest in the AAF. His grade of 85 was best amongst wide receivers. His impressive route running and great catches that left crowds amazed can contribute to that.

Ross is not a big, physical receiver as he clocks in at 6 feet 180 pounds, but he can be dangerous in the slots in the NFL. In this clip, not only does he make a great one-handed catch, but his footwork and route running were nearly perfect.

He starts off with a hesitation step to have the defensive back sit on his heels for a second, then he blasts to his outside shoulder. Ross utilizes his speed and breaks the cushion by running side-by-side with the defender. He sticks hard to cut outside, creating space. The defender ends up falling, leaving him wide open for the catch.

In the next clip, Ross is once again in the slot. He hits the slot corner guarding him with a double move, and then a hard cut to push up the field. The cuts are placed at the right moment as he causes his defender to run into his teammate. Ross notices and turns on the jets to cut upfield and make the catch on the sideline.

Ross’ speed can be dangerous and will be interesting how he fits in with the Panthers college style offense. Carolina likes to run a lot of RPOs and power runs with Cam Newton and Christian McCaffrey.

Overall, I believe Ross’ speed and capability in the slot gives him the potential to become the second option in the Panthers offense and a great vertical option as well.

Gilbert was seen as the top quarterback in the AAF league after finishing first in running and offensive production. He was second in passing grades by PFF.

Gilbert is a great dual-threat quarterback that can create damage in the NFL as well. He may not be a Lamar Jackson or Cam Newton, but he can be a decent backup quarterback behind Baker Mayfield.

Gilbert’s deep passing can and will be dangerous, especially with the new Browns offense. With the Orlando Apollos, Gilbert finished 19-for-39 with 698 yards and 9 touchdowns. More importantly, he had just one interception on the season. Gilbert completed about 48% of his deep passes. In comparison, Patrick Mahomes was also at about 48% and Drew Brees was only about 38%.

In the above clip, Gilbert’s pass is perfectly placed. It is unreachable for the defender and he leads his receiver, allowing him to catch it in stride and take it in for a touchdown.

Although the Browns are not a read-option team, Gilbert could be used in a similar style to how Taysom Hill is used with the New Orleans Saints. The Browns could bring Gilbert in on certain plays to open up the running game. In addition, Gilbert has the capability to throw and create RPOs with the strong receiver core in Cleveland.

Overall, he will be a great backup in Cleveland with the ability to pound the ball or air raid the field.

As a member of the Birmingham Iron, Perez had a lot of hype before the AAF season. He did not lead up to it but still found himself on an NFL team. With the Eagles releasing Foles to free agency, Perez could become their lead backup quarterback.

Perez was ranked 17th out of 23 quarterbacks after a mediocre passing grade, offensive production grade, and several interceptions.

Perez has several traits that hold him back from another level. For example, in the clip below, Perez lays a ball down the middle of the field in a bunch of traffic. The catch was made but against average linebackers and defensive backs. In the NFL, either that is intercepted or that receiver is going to be headhunted by a safety. The ball is floated in and seemed like a desperate throw that ended with a lucky catch.

In this clip, Perez looks right for half a second then keeps his eye locked on the slant on the left side. That will not work in the NFL. Corners will see that in the film room and anticipate the throw. It’s likely to result in an interception every time. His reads are made too obvious, which makes him a liability for the Eagles.

At the end of the day, Perez has the chance to stay on the squad, but will most likely be a third stringer or practice squad player. He won’t have a lifetime career in black and green or in the NFL as well.

As a member of the Salt Lake Stallions, Karter Schult was ranked 6th of 40 edge defenders in the AAF. Schult proved impressive with a variety of moves and ability to shed tackles.

Schult has shown the AAF, scouts, and coaches that he can bullrush, spin, swim, rip, and throw running backs around.

In this clip, Schult is the right end. He begins by attacking the tight end with a simple rip move after the chip block. Schult follows that by running up to the right tackle and hitting him with another rip. Schult finishes the play by using his surprising speed to catch up to the quarterback. To break it down simply, Schult broke through two blocks and made the sack within a few seconds. That is impressive at any level.

This one was Schult in college where he was placed at right end. Schult notices the right tackle takes an aggressive first step on a pass block and capitalizes on the mistake. He decides to swim move when the tackle lowers his head then works his way up to the running back. Schult decides to use brute strength and breaks through the block. He closes the pocket within seconds and makes the sack.

After signing, Schult will technically go in as the fourth string defensive end. By the beginning of the season, however, you can expect him to backup Everson Griffen. Schult even has the potential to work with him on left end as a starter.

These four former AAF players are just a small glimpse of how some players from the disbanded league could have an impact in the NFL. As of now, 45 of them will have their opportunity at a roster spot. And who knows? Some of them may even become the next big stars of the NFL.

The original plan for the AAF was to become a developmental league for the NFL. Unfortunately for many of the players, the journey was over before it even got started. Perhaps the outcome could turn out to become its original intent. We already know that the oddsmakers of Las Vegas are surprised. Let’s now see if those players that have received another chance can make the best of this opportunity.