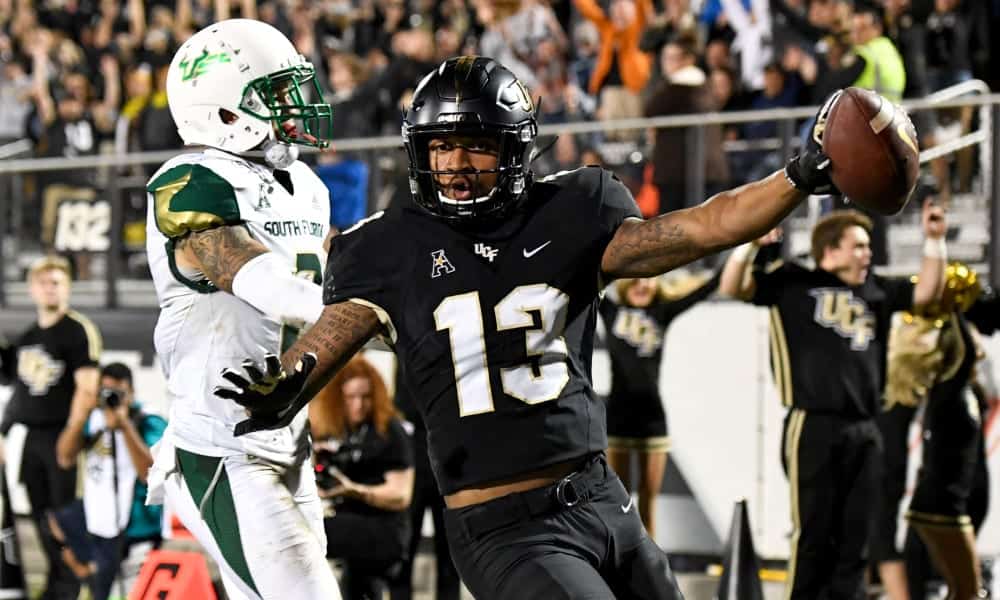 Career Snapshot: First-year starter who rushed 111 times for 484 yards and two touchdowns and missed three games due to a leg injury as a senior in 2019. Made four starts as a junior and amassed 201 carries for 1,134 yards and 11 TDs.

Positives: Large, downhill running back at his best as a short-yardage ball carrier. Powerful, keeps his feet moving, and moves the pile. Rough-and-tumble ball carrier who picks up a lot of yardage off initial contact and runs with an aggressive style. Displays vision, quickly finds the running lanes and works his runs. Falls forward when tackled. Tough to bring down and is rarely tackled by a single opponent.

Analysis: Bradwell is a bit of a one-dimensional as a power back, though he stands out in that single aspect. He’s a bit of a throwback at the running back position and he could be effective as a short-yardage runner or fullback.

Career Snapshot: Transfer from Texas Tech who averaged 7.99 yards per carry on 72 rushes and scored seven touchdowns as a senior in 2019. Made five starts and rushed 124 times for 785 yards and seven TDs as a junior. Ran track and field for three years with the Green Wave.

Positives: Small, explosive ball carrier with the ability to create yardage. Possesses the speed and quickness necessary to turn the perimeter, sets defenders up and sidesteps opponents to create yardage. Keeps the play in bounds and works to pick up positive yardage. Has a burst through the hole and immediately gets to top speed. Beats defenders into the open field and takes runs the distance.

Negatives: Easily brought down by a single defender. Minimally productive as a pass catcher out of the backfield.

Analysis: Dauphine is a quick, elusive ball carrier who has could have a spot at the next level as a situational running back and third-down specialist if he improves as a receiver.

Positives: Nice sized cornerback with upside. Jams opponents at the line of scrimmage to slow their releases off the snap, keeps the action in front of him and quickly picks up assignments. Fluidly flips his hips in transition and stays with receivers out of breaks and on crossing patterns. Mixes it up with opponents throughout the route, quickly gets his head back around to locate the pass in the air and has a nice move to the throw. Works hard to get off blocks and makes plays against the run and against screen passes.

Negatives: Deep speed may be an issue. Doesn’t play to his 40 time. Seems to struggle with his route recognition in zone coverage.

Analysis: Keyes has been a solid player for Tulane and has the measurables necessary to play at the next level. He needs to polish his game, but he has potential as a dime back in either bump-and-run or man-off coverage.

Career Snapshot: Transfer from Oklahoma State who started his lone season at Tulane and caught 37 passes for 581 yards and four touchdowns as a senior in 2019. Played four games in 2018 before he decided to transfer and maintain his final year of eligibility. Set career highs with 73 receptions for 812 yards and seven TDs a sophomore for the Cowboys in 2016.

Positives: Former Oklahoma State receiver who has shown flashes throughout his college career. Possesses tremendous short-area quickness, immediately gets to top speed and has a burst. Runs sharp routes, quickly gets into breaks, and stays low on exit. Comes back to the ball and follows the quarterback across the field.

Negatives: Small, struggles in battles and gets brought down easily at the point. Cannot take a pounding and hold onto the throw. Marginally productive for most of his college career.

Analysis: McCleskey is an explosive wideout who can be used in the slot and line up as a punt returner. While he offers next-level potential, he must quickly produce this summer to make it out of camp.

Career Snapshot: Transferred from LSU during the summer of 2018 and took over the starting job under center at Tulane two months later. Completed 51.3 percent of his passes for 1,304 yards, 10 touchdowns and four interceptions during his junior season. Completed 58.3 percent of his passes for 2,444 yards, 17 TDs and 10 INTs as a senior in 2019. Added 983 yards and 17 scores on the ground in his two seasons with the Green Wave.

Positives: Former LSU quarterback with terrific physical skills. Has excellent length, gets depth on his drops and has an NFL arm. Shows patience in the pocket, drives deep passes and puts speed on all his throws. Creative when he takes off as a runner, shows the ability to elude defenders and improvises when plays break down. Easily gets outside the pocket to escape the rush and loses nothing throwing on the move.

Negatives: Must significantly improve his accuracy and pass placement. Makes receivers work hard to come away with the reception too often. Inaccurate passes lead to a loss of opportunity.

Analysis: McMillan possesses the physical skills and intangibles to play at the next level, but he needs a lot of work on his game and must turn from a thrower into a passer.

Career Snapshot: Transfer from Brown who started three seasons with the Bears and one at Tulane. Earned Second Team All-Ivy honors as a junior in 2017 after he moved from center, where he started his first two seasons at Brown, to tackle. Suffered a season-ending foot injury in the first game of the 2018 season and was granted a sixth year of eligibility. Started at center in his lone season with the Green Wave.

Positives: Hard-working, explosive center who fires off the snap into blocks and keeps his feet moving. Tough, fundamentally sound and blocks with proper leverage. Quarterbacks the offensive line very well.

Negatives: Limited athleticism and upside. Lacks footwork and the ability to slide in space. Possesses average strength and gets overrun by bigger linemen.

Analysis: Montano is a hard-working lineman who gets the most from his ability, but he comes with average size, athleticism, and upside.

Career Snapshot: Four-year starter who caught 48 passes, set career highs with 993 receiving yards and eight touchdowns and led the AAC with 20.7 yards per reception as a junior in 2018. Made 48 receptions for 713 yards and five TDs in 2019.

Positives: Quick, elusive athlete who can be used as a receiver and return specialist. Displays focus and concentration, makes the difficult over-the-shoulder reception and works to come away with the catch. Uses his frame to shield away opponents.

Analysis: Scouts graded Mooney as a potential late-round pick coming into the season, but he failed to live up to expectations. He’s a smaller but swift skill player who will have to show ability as a punt returner this summer to make an NFL roster.

Career Snapshot: Two-year starter who earned First Team All-AAC honors and made 49 tackles (15 for loss) with eight sacks as a senior in 2019. Made 46 tackles (nine for loss) with four sacks and tied for second in the nation with five forced fumbles in 2018.

Positives: Athletic defensive end with big upside. Plays with proper lean, consistently gets leverage on opponents, and keeps his feet moving. Effectively uses his hands and displays solid movement skills and fluid change-of-direction ability. Chases the action hard, flashes the ability to bend off the edge, and gets focused on by opponents. Displays a quick closing burst and works to make plays.

Analysis: Gipson has shown flashes the past two years and did much the same during Senior Bowl week. He’s an athletic prospect who must add bulk and strength to have a place at the next level.

Career Snapshot: Three-year starter who made 38 tackles with four interceptions and 13 pass breakups as a senior in 2019. Combined to make 75 tackles with 16 pass breakups his first two seasons at Tulsa. Missed several games in 2018 due to a broken right arm and a pulled hamstring.

Positives: Nice-sized cornerback with an explosive style. Quick in his backpedal, fluidly flips his hips in transition and displays a nice move to the throw. Feisty, effectively reads and diagnoses the action and battles to defend throws. Fires up the field and works to get off blocks to make plays against run plays and screen passes.

Negatives: Struggles to stay on the receiver’s hip out of breaks. Does not show great recovery speed despite his 40 time and has an average burst to the ball out of his plant.

Analysis: Robinson was not graded by scouts coming into the season, but he had a solid senior campaign and performed well during Senior Bowl week and at the combine. He’s a developmental prospect who could eventually play in nickel packages and on special teams at the next level.