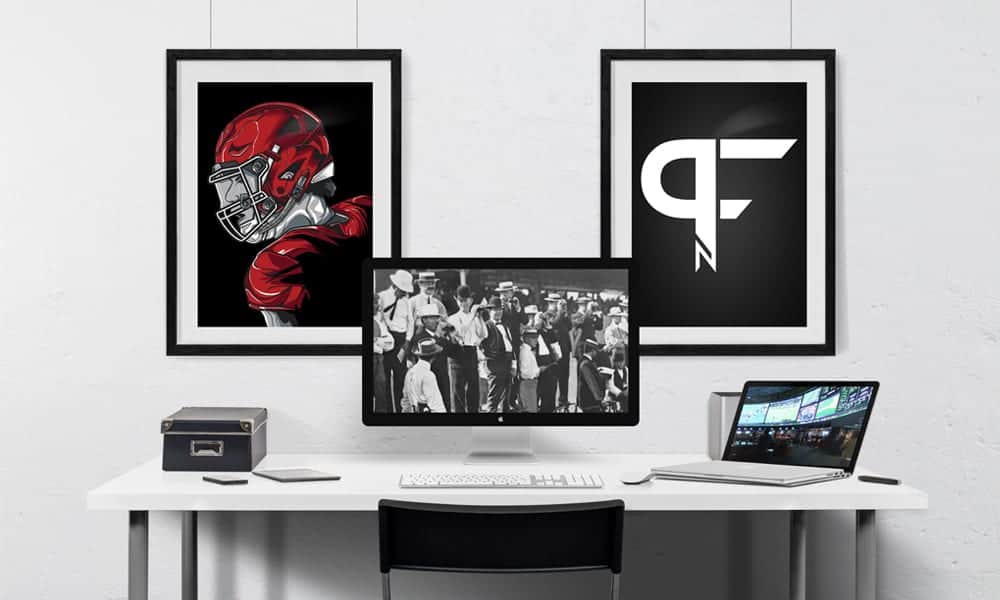 What's in this article? Click to show
The history of NFL betting
The betting market develops overseas
The NFL’s stance slowly begins to shift

In the past 10 years, American sports have seen a revolution when it comes to the world of gambling, and the sport that seems to have privately embraced that revolution the most has been football. The NFL has been taking the slow and steady approach, while the XFL jumped in with both feet right from the preseason. However, while widespread sports betting is a recent development for much of America, the country has a long and mixed history when it comes to gambling in general. Let’s take a look at the story of NFL betting in the context of America’s gambling history.

The history of NFL betting

A story as old as the country itself

Gambling in America can be traced back to the colonial days when the Virginia Company held a lottery to raise additional funds in Jamestown. These lotteries played a massive part in funding not just the revolt by the colonies against the crown, but also to allow the new states to establish themselves without taxing the very people who had just rebelled against taxation. However, corruption meant that lotteries were banned in the 1830s in most states, at least until they needed to raise funds in the second half of the 20th century.

During that gap, sports betting began to fill the void. Following the Civil War, horse racing began to grow in popularity, with tracks popping up all over the country. The next sport to gain popularity when it came to betting was baseball, but even early football games between colleges were drawing interest. Unfortunately, sports betting was cast in a bad light. Slowly, bettors were viewed as criminals, especially following “The Black Sox Scandal,” where the World Series was fixed by gamblers, leading to eight players getting a lifetime banishment.

Gambling itself achieved legalization in Nevada in 1931, but it took another 20 years for sports betting to be legal in the state. In the meantime, illegal gambling was sweeping across the country. Initially, most wagers focused on what we now know as Moneyline betting, both single-games, and parlays. However, this was rife with corruption, as parlays were often offered massively under the real odds, protecting the bookmakers.

In the 1930s, the process of football betting became more controlled with the commencement of the “Minneapolis Line,” which was the primary source for bookies to obtain spreads. As the 1940s approached, the bet $110 to win $100 model began to become increasingly popular. These early advancements can be traced through to current sports betting, with “The Gold Sheet” website having its origins in those publications that were responsible for setting the spread back in the 1930s.

A complicated 50 years of history

In the 1960s, the world of sports betting took several hits. The 1961 Federal Wire Act and the Travel Act made it illegal to either discuss gambling over the phone or to use the mail for certain specified criminal acts, including gambling. The 1964 Sports Bribery Act was enacted in an attempt to protect professional and college athletes from the pressures associated with the illegal gambling industry. The 1970 Illegal Gambling and Business Act further increased the powers of the federal government for targeting these criminal organizations.

However, perhaps the most significant blow to illegal gambling was when Nevada Senator Howard Cannon convinced congress to reduce the legal sports betting tax from 10% to 2%. This led to a boom in sportsbooks, especially after Frank Rosenthal convinced Nevada, which had escaped much of the gambling illegalization acts in the 1960s, to allow them inside casinos. The sports betting tax was further reduced to 0.25% in 1983, seven years after the state of New Jersey voted to allow casinos in Atlantic City, and five years after the first casino opened with a fully-fledged sportsbook in Atlantic City.

All of the progress was undone in 1992 with the Professional and Amateur Sports Protection Act (PASPA). This act outlawed states from offering any sports betting services on any sport other than horse or dog racing. While Las Vegas once again escaped with full sportsbook freedom, this act mostly left the world of professional sports betting in the hands of the British and Southeast Asian bookmakers. These bookmakers, especially in the UK, took their opportunity to take advantage of the growing popularity of the NFL overseas.

In the infancy of betting on the National Football League overseas, the bookmakers took their lead from the lines that were set in Las Vegas. This meant that in large part, the only lines available were Moneyline, points spread, or total points bets. While some bookmakers began to experiment with lines such as the sum of touchdown scorer’s shirt numbers, it took the rise of the exchange market for the development of betting options to truly occur.

These exchanges allowed two users to essentially bet against each other and take the bookmaker out of the equation altogether. The desire to make the most of this platform led to users gambling on many markets such as first or last touchdown scorer, anytime touchdown scorer, and both spreads and totals within individual halves and quarters. The wealth of options on these exchanges forced bookmakers to open up their offerings to be able to compete.

While bookmakers around the globe were learning about the wealth of options that betting on the NFL could offer, the expansion of the internet allowed American gamblers to place bets once again. This ability came via offshore opportunities, namely in the Caribbean. However, much like early illegal bookmakers, these offshore bookmakers lacked regulation, which led to several stories of bettors being taken advantage of and, in some cases, refused seemingly legitimate payouts.

Related | How to bet the NFL: Betting platforms and different bet types

A rush of developments in America

In 2006, the instigation of the Unlawful Internet Gambling Enforcement Act began to change things for American sports bettors. This act determined that fantasy sports were a game of skill and, therefore, was not considered illegal. This ruling became particularly important with the emergence of the Daily Fantasy Sports industry in 2010. With the lines now blurred between fantasy sports and gambling, numerous court battles began around the country to determine the legality of the newest form of fantasy sports.

At the same time, as the legality of DFS was being questioned across America, the legal battles surrounding direct sports betting began to become more widespread. Numerous states were now looking to try and find loopholes in PASPA, with an eye on the potential goldmine of tax revenue income that would come with sports betting legalization.

Throughout its history, the NFL had always publicly been against sports betting; in fact, they were a principal sponsor of the 1964 Bribery Act. However, in 2016, the league announced the move of the Oakland Raiders to Las Vegas, suggesting that perhaps gambling was not as taboo inside the league as they gave the impression to the outside world. In the 2019 season, the league then went a step further, with agreements with both Caesers Casino and DraftKings making headlines on the business side of the industry.

Then came the XFL and their extremely open stance on sports betting. XFL broadcasts became the first in pro football to contain numerous references to sports betting. This included displaying the closing lines for the game on their in-game scoreboard, as well as discussing live lines throughout the games. This development will have been observed keenly by the NFL.

While the most prominent professional football league in the world may not yet be ready to embrace gambling fully, there are certainly more and more signs that the anti-gambling stance is fading. However, as we saw with that “Black Sox Scandal” in 1919, one poor decision by a single player, group of players, or even an official could quickly bring the house of cards that is carefully being constructed by the NFL crashing to the ground.

In 2019, Arizona Cardinals cornerback Josh Shaw became the first NFL player in 35 years suspended for betting on NFL games. While no evidence was found that Shaw’s action compromised the integrity of the sport, it offered a stark reminder to the NFL of the risks that come with embracing the gambling industry.

The big question is, does the potential financial rewards for the NFL outweigh the potential risk that a significant gambling scandal offers. If the answer to that question is yes, then we could see the NFL move exceptionally quickly in the coming year to secure themselves lucrative deals within the industry. However, if the risk continues to be a concern, then we may continue to see the slow and steady wade into the world of sports betting from the National Football League.

In this article:Betting 101, Featured, featured