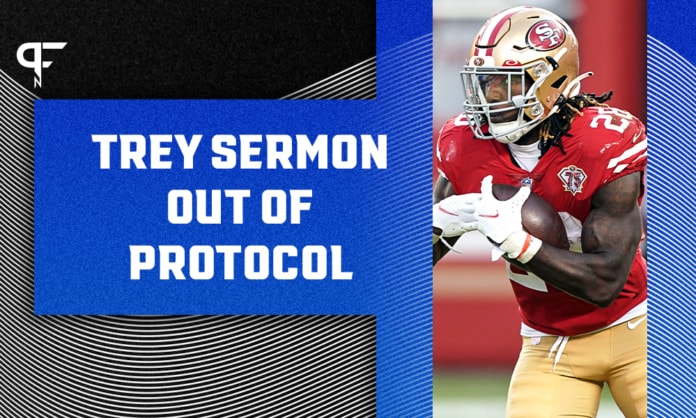 The 49ers' injury report includes running backs Trey Sermon, who's been cleared, and Elijah Mitchell, who's doubtful for Week 3.

The San Francisco 49ers‘ injury report shows that running back Trey Sermon (concussion) is clear to play Sunday against the Green Bay Packers, while Elijah Mitchell (shoulder) is a long shot. The Niners are listing Mitchell as doubtful — and even that might be optimistic, according to coach Kyle Shanahan.

“If Raheem [Mostert] was still here and [JaMycal] Hasty was still there, we’d definitely wait a week,” Shanahan said Friday, according to The Athletic.

Mitchell practiced Friday for the first time since banging up his shoulder Sunday. Sermon’s concussion symptoms abated to the point that the 49ers could take off the noncontact jersey for Friday’s practice.

Four 49ers running backs have had injuries in the last two weeks. Mostert (knee) is out for the season, and Hasty is out for a while, Shanahan said Wednesday.

But San Francisco’s medical staff held out hope through the week that Mitchell and Sermon could play, even though both missed some or all of practice Wednesday and Thursday.

Sermon had recovered by Wednesday to the point that he could practice on a limited basis, even though he remained in the concussion protocol. Mitchell’s shoulder ended up being “a little worse than a stinger,” Shanahan said. Nonetheless, it wasn’t so serious that the team ruled him out for the Packers game before the workweek even began.

To account for that uncertainty, the Niners crafted a flexible game plan and made two roster moves involving running backs. They poached Jacques Patrick off the Bengals’ practice squad and signed Chris Thompson to their own practice squad.

After the Mostert injury, San Francisco claimed Trenton Cannon last week off waivers (he had been cut by the Ravens) and wasted no time putting him in live action. Cannon had a special-teams role in Week 2 and even got a carry when the wave of injuries hit in the fourth quarter.

“Just when you get in those situations and you don’t have 53 on your roster, it’s a cool opportunity for all the scouts and everybody upstairs who sit and study other rosters all day to look at practice squads and give us who they think the best one is,” Shanahan said.

Shanahan: “And they give us a good choice of guys, and we looked at all of them, and then we all came to the conclusion that that was our top guy. And so, it was a good opportunity for us to get him.”

Mitchell has been by far the Niners’ RB1. His 36 carries (for 146 yards and a touchdown) through two games were six times more than any other back. Sermon, the rookie out of Ohio State taken in Round 3, has the most upside of the group but is still pretty green. He was a healthy scratch in Week 1.

Cannon has just 51 carries (for 150 yards) since entering the league with the Jets in 2018. Patrick’s next NFL game will be his first. Thompson is the most accomplished of the bunch, totaling 1,214 rushing yards and 5 touchdowns in his first eight NFL seasons.