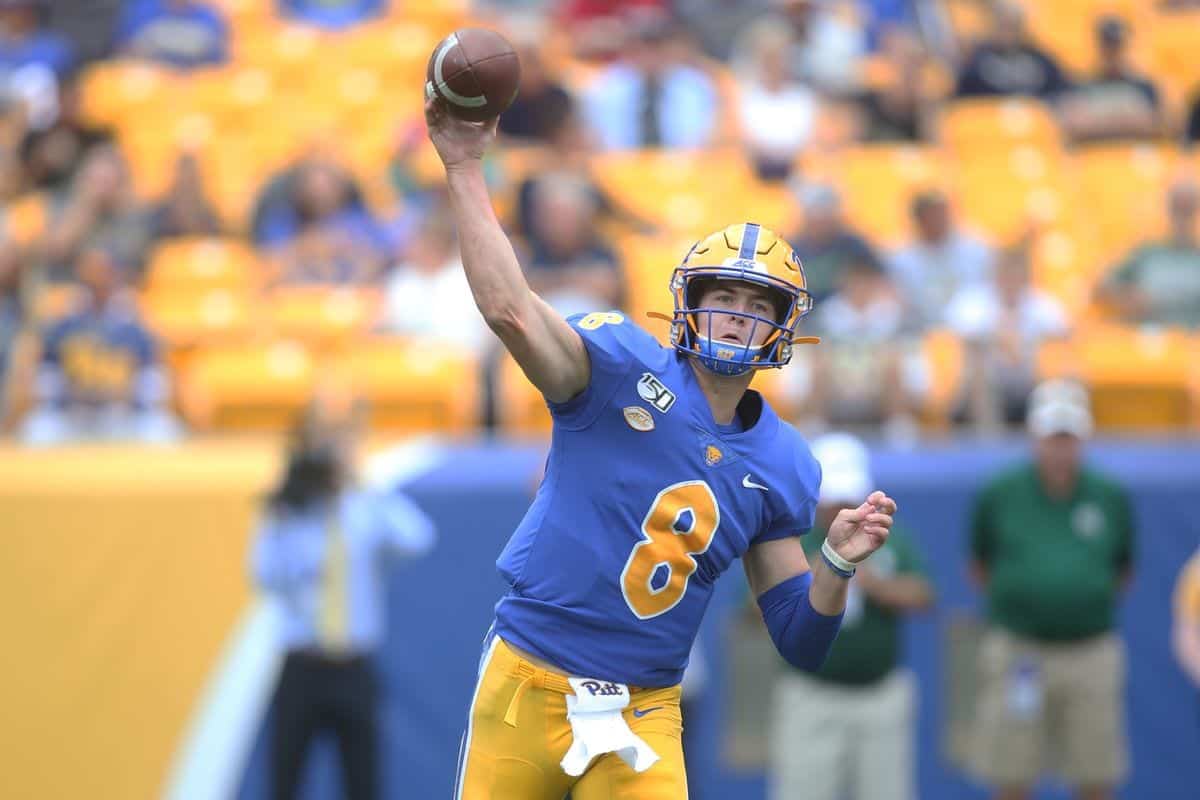 In 2018, LSU quarterback Joe Burrow was a little-known transfer from Ohio State. In that season, he completed 57.8% of his passes for 2,894 yards, 16 touchdowns, and 5 interceptions. In 2019, that same Burrow put together the best passing season in collegiate history, amassing 5,671 yards, 60 touchdowns, and just six interceptions, completing 76.3% of his throws for over 10 yards per attempt. Burrow proved that draft prospects could go from obscurity to stardom in just one season. In the 2021 NFL Draft, these three deep sleepers at quarterback could capitalize on that potential concept.

When quarterbacks have untapped physical potential, it makes an eventual breakout season that much more of a possibility. Physicality is an area Kenny Pickett isn’t lacking, in fact, he has the kind of athleticism and arm talent that pops on screen.

Pickett helped lead Pat Narduzzi’s Pittsburgh Panthers to an 8-5 record and a bowl victory in 2019. His stats aren’t particularly impressive in a vacuum, as the signal-caller threw for 289 completions, 3,098 yards, 13 touchdowns, and 9 interceptions on 469 attempts. However, Pickett was able to improve his completion percentage from 58.1 to 61.6, crossing the vital 60% threshold. On tape, he shows flashes of accuracy to match.

When in rhythm, Pickett has good mechanics with a smooth throwing motion, and he can generate velocity with relative ease. His motion generates excellent torque, and when he’s able to square his shoulders and get a full rotation, he can be a pinpoint passer. He also has good mobility, which allows him to keep plays alive, and he’s a competitive runner who’s not afraid to make things happen himself.

Of course, as is often the case, a quarterback’s volatility can be a double-edged sword. Pickett has traits that are conducive to off-script ability, but he’s still very far from put together. Out of structure, his decision making can be spotty, and he has occasional focus issues, such as dropped snaps and unnecessary sacks. All that being said, Pickett progressed with Mark Whipple’s offense in the first year, and if he can put it all together, he has the physical foundation to emerge in 2020.

Pickett isn’t the only quarterback with the physical abilities on this list. Illinois’ Brandon Peters, a former Michigan signee, has similar athleticism and arm strength, However, Peters comes in three inches taller than Pickett, at 6-foot-5, 220 pounds.

Peters is an imposing presence for defenses, and he’s a big reason why Lovie Smith’s Fighting Illini are one of the rising programs in the Big Ten. Last year, Illinois made it to bowl season for the first time since 2014, and Peters showed promise in his first full season as a starter.

For his size, Peters’ athleticism immediately stands out. He’s not Cam Newton, but he has enough mobility to avoid rushers in the pocket, roll out, and extend plays, as well as scramble in open space. Peters generally has good poise in the pocket, and while he can trail back in the face of pressure, he’s tough and competitive to the final whistle.

Peters only completed 55.3% of his passes in 2019, but there’s clearly some arm talent when watching him on tape. He generates good velocity both in stance and on the run, and he has a quick throwing motion despite his large frame. He shows flashes of touch, and he can fire the ball into tight windows when he’s mechanically set.

If Peters can refine his decision-making, and work on sticking through his progressions, he has the physical traits to both lead himself and Illinois to greater success in 2020. Additionally, the Power 5 stage is just what he needs to gain national recognition.

It’s a bit surprising that Appalachian State quarterback Zac Thomas hasn’t gotten more buzz in the college football world, as he’s produced at a solid level for two years now. In 2019, he completed 225 of 359 attempts for 2,718 yards, 28 touchdowns, and 6 interceptions. He also ran for 440 yards and 7 scores on 104 attempts.

As evidenced by his stats, Thomas is a multifaceted quarterback who has the running ability that teams look for in the modern NFL. He’s proactive producing on the ground and has toughness as a runner that can invigorate his teammates.

Unlike Pickett and Peters, Thomas’ arm isn’t anything to write home about, but he can still generate decent velocity when he’s in rhythm. He has good accuracy in the short and intermediate ranges, and he has a nice, compact throwing motion. Thomas can work on being more crafty with his eyes (which will come with time), comfort, and mental development. Given his success at the college level, as well as his experience and drive, he should be able to get a chance somewhere in the NFL if he continues his production in 2020.