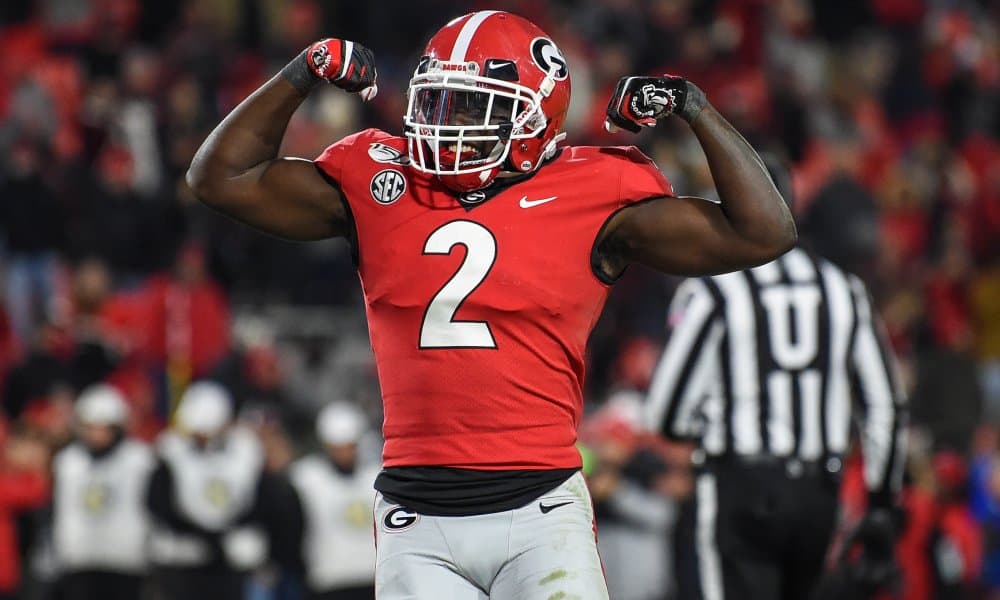 As time passes, safety play becomes more and more a fascination for yours truly. It’s become my favorite position to scout, mostly due to the versatility of skillset and responsibility. Attempting to place value to all the different archetypes and talents is a difficult prospect. Enjoying it is simply masochistic. But every once in a while, you come across an easy watch. A no-brainer. Georgia safety Richard LeCounte III is that player.

As a recruit, the Georgia Bulldog was a five-star player with a glowing scouting report that touted his instinctive nature and athleticism. His football IQ and abilities against the run were also highlighted. But the most glowing notes were of his ability as a single-high safety who could patrol the entire field.

LeCounte is now a senior that’s started in 27 of 28 games over the past two seasons on an elite Georgia team as a former five-star recruit. He produced like a madman in 2019. In the Sugar Bowl he had not one, but two, interceptions against Baylor. How does a player like that, with that pedigree, not declare? How is he not talked about as a first-round talent?

Well, because he isn’t a high-end athletic specimen. He’s a bit undersized at 5-11 and 190 pounds, which was a note coming out of high school at under 180 pounds. But on top of that, he doesn’t have the elite explosion that some believed from his high school tape. LeCounte does it with outstanding instincts and football IQ, not standard athleticism.

LeCounte knows his job better than you know yours

Kirby Smart sprouted from the Nick Saban coaching tree. As Alabama’s defensive coordinator from 2008-2015, he got to work closely with one of the top defensive minds of all time. The Georgia Bulldog head coach took what he learned and implemented it in Athens.

The defense, in it’s most basic form, is a pattern-matching cover three that uses a lot of quarters principles. The Georgia safeties “spin” a lot down from their two-high shell to better fit against the run. LeCounte spent most of his time during the season as the boundary safety. This allows him to be the spinning safety less often as most teams will go with 3×1 offensive sets to the field side. This lets him be that center fielder more often than not.

This is the big kicker with LeCounte and the reason why he simply won’t be valued to early come draft day. His ability to key and click, seeing both quarterback and routes, knowing his responsibility, and getting on that horse on time is what he does. Whether it be clicking downhill on dig routes when the compliment runs an out or some sort of stop route, he does it all. But he won’t always get to the landmark, because he doesn’t have the top-end speed of your Malik Hooker types.

There’s no doubt that as a true zone or match zone safety he will be a solid player at the next level. He’s so cerebral both as an underneath defender and on the back end. But he doesn’t have the easy speed to chase down backs gallivanting along the sideline and he’ll struggle to stay on the hip of receivers going vertically.

This lack of size, length, and strength could be a detriment if he’s forced into red zone matchups against tight ends. Also, the Wookiee tight end types will out-athlete him, which means a defense will have to scheme around that. However, time and place are always on point with LeCounte, and he is consistently playing to the top of his physical potential at the line. He works hard to reroute receivers and tight ends off their stem to screw with their timing, and he’s fluid in lateral movements and transitioning from a pedal to run.

You’ll never guess it, but LeCounte is always where he is supposed to be. He brings a ton of violence when he attacks blocks downhill, throwing his entire frame into pulling guards and reaching tackles. However, his lack of functional strength makes disengaging from blocks a struggle, and he can often be swallowed up by blockers if he’s not flying downhill.

From a pure tackling standpoint, LeCounte is adequate, but there are times where he will drop the crown of his helmet and attempt to throw a shoulder rather than bring his arms to the party. This is probably a compensation for his lack of strength, but it can lead to some glancing blows when he doesn’t get make good contact.

LeCounte will be an under-drafted player who will be a starter for six to 10 years at the next level. He’ll probably even make a Pro Bowl or two because when his instincts meet opportunity he seems to take full advantage. He’s a vocal leader on and off the filed. But size and speed are still coveted, and rightly so, by coaches and evaluators. Some team will reap the benefits of another passing on this young man.