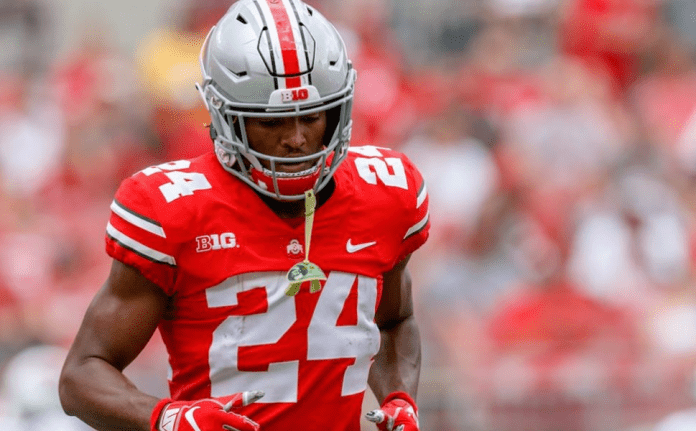 The 2020 cornerback class has been lauded for its depth and star power, but the 2021 cornerback NFL Draft class has the potential to match.

By Matthew Valdovinos
February 14, 2020
What's in this article? Click to show
The CB1 Contenders
Top recruits ready to produce
Returning upperclassmen to watch

The 2021 cornerback class doesn’t have an elite talent like Ohio State’s Jeffrey Okudah. At least that how it looks currently. In case you’ve forgotten, at this time last year, virtually no one had Okudah as CB1, so what happens next season will obviously dictate some shift in the rankings dynamic. Right now, I believe there are three corners who will likely be first-round picks, followed by three players who were highly-touted high school prospects and will entering their first year of eligibility. Finally, I have a list of five players who chose to return to school for the upcoming season; all of them are likely to be drafted, but how high they get selected will be dictated by their season. Some returned due to a lack of national recognition, while others returned because they failed to perform at the level many were expecting. Regardless of the reasons, they will look to have strong performances this season. If you have some other players at the position you think I should be on notice for, tweet me @MVScouting.

Patrick Surtain Jr., Alabama: Son of former NFL player Patrick Surtain, Patrick Surtain Jr. quickly established himself as the next best Alabama defensive back. Surtain appeared in 15 games as a true freshman, not something many Alabama alumni can say. He possesses strong physical gifts with a frame of 6’2″, 203 pounds, with noticeably long arms. He’s also a good athlete, running in the 4.5s as a senior in high school.

Surtain has all the physical gifts teams require in a first-round cornerback, and he’s not just physical tools. Surtain utilizes his length at all times, but most prominently when the ball’s in the air. To this point, he’s already accumulated 15 pass deflections and three interceptions. He’s displayed elite ball skills, and he’s a turnover machine. Not only is he a threat to catch an interception, but he’s always aware of where the ball is on a ball carrier and has already mastered the “peanut punch,” made famous by Charles “Peanut” Tillman.

The “peanut punch” is punching the ball at the right moment and angle, effectively knocking it out of the ball carrier’s hands. Doing this, Surtain has forced four fumbles in his career. He’s a willing tackler and has made a number of big hits in his short career. He’s well developed and refined, while also possessing excellent physical abilities and production. Expect Surtain to be one of the first cornerbacks drafted if he declares in 2021.

Marco Wilson, Florida: As weird as it sounds, I don’t think C.J. Henderson is the best NFL prospect in Florida’s secondary. While elite in coverage, Henderson does have tackling woes that make me hesitant of dubbing him a first-round prospect. Marco Wilson does not have those issues. Wilson started all 11 games in his first season at Florida. According to floridagators.com, he joined Joe Haden (2007), Janoris Jenkins (2008) and Marcus Roberson (2011) as the only four true freshmen to start at cornerback on opening day in program history. He also started the first two games of his sophomore year before tearing his ACL in Week 2.

Wilson had a strong return this past season, as he set career highs for interceptions, tackles, and tackles for loss. He doesn’t possess an ideal frame at 6’0″, 190, but if he can fill in, it will suit him fine in the NFL. He has solid ball skills but typically looks to knock the ball away an ensure an incompletion as opposed to going for the interception. However, the best part of Wilson’s game is his willingness to tackle and get his hands dirty. He feasts on screen plays and quick passes to the line of scrimmage. This aspect of his game actually reminds me of another former Gator who recently enjoyed a breakout season: Redskins cornerback Quinton Dunbar.

Shaun Wade, Ohio State: Shaun Wade had fans throughout the entirety of the draft community in 2020. The way he played opposite of Okudah was elite for most of the season, and he had a game-defining sack on Trevor Lawrence in the national championship that was egregiously called for targeting. Wade was a force for the Buckeyes all year, particularly around the line of scrimmage. Though his frame is lean, Wade is a sure tackler and great at tracking down ball carriers. I think he’s best suited for a slot role in the NFL, and with the way offenses are lining up, the slot cornerback is as important as any other member of the secondary.

Tyson Campbell, Georgia: We already have Patrick Surtain Sr.’s son on this list, so it’s only fitting to also have his top prospect. After being coached by Surtain Sr., Campbell became one of the nation’s top defensive backs and committed to Georgia as a five-star prospect. A productive high school player, one thing with Campbell stuck out above all else: Speed. With Henry Ruggs III leaving for the NFL, Campbell has a legitimate chance at being the fastest player in all of college football next year. He also possesses solid length at 6’2″, but must fill out as he currently weighs in under 190 pounds. A fully healthy season would be great for Campbell. However, he has yet to register an interception and that’s a black cloud he won’t want hanging over his head come draft season.

Isaac Taylor-Stuart, USC: A consensus top-10 CB, Isaac Taylor-Stuart has the natural athletic ability to be one of the league’s top corners. He’s fast, though likely not as fast as Campbell, and he’s as explosive as they come. His short area burst is an elite trait, and he’s at his best when keeping a play in front of him and using that explosion to make a play. At 6’2″, 205, he has requisite size, and as long as he can bring a level of consistency to his game this season, he could challenge to be a first-round pick.

Derion Kendrick, Clemson: One of my favorite stories for the 2021 NFL Draft is Derion Kendrick. Once viewed as a consensus top-50 prospect, Kendrick was one of the nation’s most dominant… receivers. However, he was used sparingly in his true freshman season at Clemson. An injury then caused a major need at the cornerback spot, and Kendrick not only stepped up for the challenge — he shined. Kendrick played cornerback at a high level after learning it on the fly over the summer. Imagine what he can do with full season and offseason under his belt. I expect him to bring his game to a whole new level.

Paulson Adebo, Stanford: Many believed Paulson Adebo to be a potential first-round prospect at the beginning of last season. Unfortunately, Adebo’s play fell off a bit this past season, and he ended the season injured. Adebo chose to return to school, and if he recaptures his 2019 self, he should be a top-50 pick.

Camryn Bynum, California: Camryn Bynum was another member of Cal’s dominant defense in 2019. He chose to return for his senior season and will look to continue his strong career. With 38 games started in his career, Bynum should excel in the Senior Bowl.

Caleb Farley, Virginia Tech: With 16 pass deflections and four interceptions last year, Caleb Farley is returning as one of the most productive cornerbacks in the nation. If he can find similar production to last year, he should be a Day 2 pick.

Ambry Thomas, Michigan: I believe Ambry Thomas was Michigan’s top defensive back this year. He’s not an overly productive player, but he brings value as both a cover cornerback and a return man.

Shaun Jolly, App State: The top non-Power 5 cornerback, Shaun Jolly was lockdown for Appalachian State this past season. He produced five interceptions this year but projects best as a slot cornerback at the next level.

The 2020 cornerback class has been lauded for its depth and star power, but the 2021 cornerback NFL Draft class has the potential to match its preceding position group. Stay tuned through the summer and over the course of the next season to see where these prospects end up!