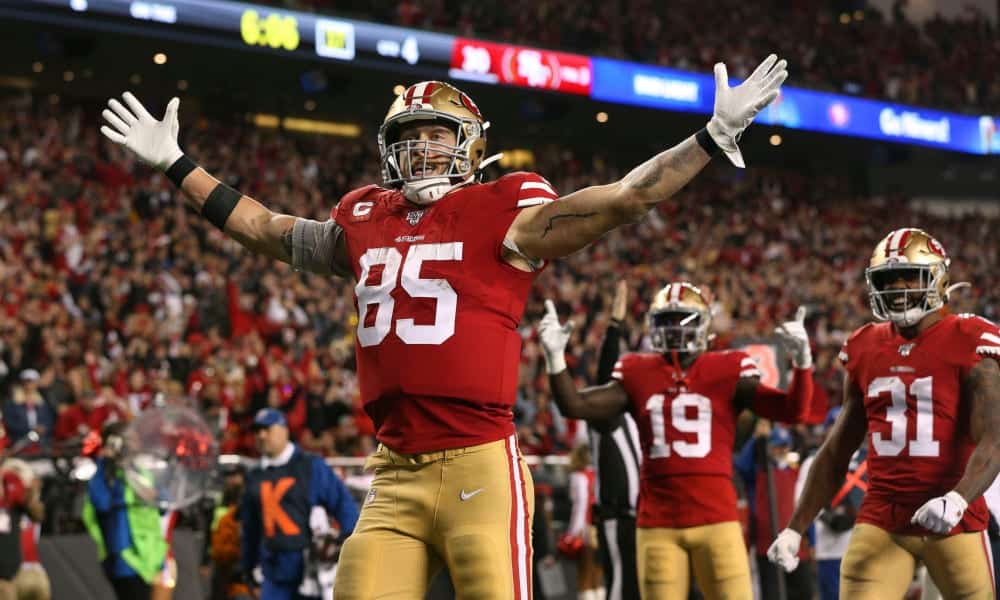 The Conference Championship games are done and dusted, and the countdown to the Super Bowl has begun. The Super Bowl is one of, if not the best, sporting events in the calendar for many reasons. Even if you are not a Kansas City Chiefs or San Francisco 49ers fan, it does not mean you cannot be invested in the outcome of the game. The perfect way to do that is with a wager on the game in one form or another. My personal favorite is the Super Bowl MVP prop bet market because you can invest in both the result and individual performances at the same time. In this article, I will take a brief look at the history of the MVP award, before taking a look at some potential targets for MVP prop bets in the 2020 Super Bowl.

History of the Award

An MVP award has been handed out in all of the 53 Super Bowls played so far. The award was shared once, so we have 54 winners in total. Somewhat unsurprisingly, the dominant position has been quarterback, winning 29 times. After that, the MVP award has been won by wide receivers and running backs seven times each. A defensive player has won the award ten times, with Desmond Howard of the Green Bay Packers the only kick returner ever to take home the award.

If we focus on the last ten years, the award has been dominated by the QB position even more so, with seven quarterbacks winning the award. The other three have been won by linebackers twice, Von Miller and Malcolm Smith, and a wide receiver, Julian Edelman, last season.

Seeing as the QB position has been the dominant force, let’s start there.

Understandably you are not going to find much value at the QB position because they have won more than half of the Super Bowl MVP awards historically and 70% of the last decade. Patrick Mahomes is the outright favorite, with his odds hovering around the +100 mark. Mahomes is so good that I could see a situation where the 49ers win, and Mahomes becomes just the second player ever to win an MVP award while on the losing side. If you are confident the Chiefs are going to win, taking Mahomes at +100 is actually a smart play to improve your odds on the Chiefs. My colleague Chris Smith has already advised that this is an intelligent play, and given what we have seen in the last two weeks, it looks to be a potentially wise investment.

Jimmy Garoppolo is a little harder to make a case for, especially given what we have seen in the last two weeks. San Francisco has essentially made Garoppolo a game manager at times this season, and given the Chiefs ranked among the worst in the league in DVOA when it came to their run defense, they may do this again. However, we have seen Garoppolo step up when required at times in his career. He was clinical against the Saints in New Orleans this season, and if this game becomes the shootout many expect, he may need to be again. With odds around the +250 region, Garoppolo is an interesting option if you think the 49ers are going to win a high scoring game.

I am going to circle back to running backs because the receivers and tight ends made logical sense to come after the quarterbacks, given their value is closely linked. Given that we do not expect to see the turgid offensive affair we saw last year let’s look at possible scenarios that see a WR or TE as MVP. A 100-yard receiving game is almost a must, which many of the big names in this game are capable of. Given the expected high scoring nature of this one with the total set in the 50’s, they will likely also need to find the end zone at least once, and maybe more. Realistically, the names we can consider here are Tyreek Hill, Travis Kelce, George Kittle, and… Sammy Watkins.

Deebo Samuel and Emmanuel Sanders are good, but they are not the type to take over a game in the style of the four names above. George Kittle is perhaps the most interesting name because he is a player capable of the big impact play. For example, cast your mind back to the Saints game and all the conversation about Kittle’s effort that essentially put the game in the hands of the 49ers. Despite Garoppolo having a great game, everyone was talking about Kittle. If he puts up a touchdown and a couple of highlight-reel jaw-dropping plays in a 49ers loss, then he has every chance of taking home the crown. With odds of +1400, he is the only receiving option for the 49ers I can see winning the award.

As for the Chiefs pass catchers, you can make an easy case for both Kelce and Hill. If they can get multiple touchdowns, and those touchdowns are the majority of the ones Mahomes throws, combined with a big yardage game, then they can absolutely jump their QB to the MVP award. However, in the +1500 region for both of them, I would have a hard time picking one or the other, especially knowing Mahomes is the more likely recipient of the award in a Chiefs win.

Sammy Watkins is the name to look out for at +3300. If the 49ers focus on taking away Hill and Kelce, then Watkins could be the player who prospers. We saw Watkins have a monster game in Week 1 of the season, and we know he has the talent to do it again. Much like Hill and Kelce, it would more than likely need at least two touchdowns for him to leap Mahomes. However, I like the odds available here for a player more than capable of getting open and dominating in single coverage.

A big part of the running game will depend on the health of Tevin Coleman. We just saw Raheem Mostert dominate the Packers in the NFC Championship Game, and his current odds sit in the +700 region. With the Chiefs run defense having been somewhat mediocre this season, it is reasonable to see Mostert having another big game. We just saw them do a solid job against Derrick Henry, but the 49ers passing talent will make it harder for the Chiefs to focus as much attention on the run game as they did against Tennessee.

If you want longer odds but want to get involved with the 49ers running game, you can gamble on the health of Tevin Coleman for +5000 or on Matt Breida living up to his preseason hype at +15000. Damien Williams (+1600) is the only back on the Chiefs to really consider, but it is hard to envision a game script where he dominates the game enough in a Chiefs win.

I always like to have a dabble on the defensive side to win Super Bowl MVP, but this year I just cannot see this game being dominated by either defense. Nick Bosa at +2000 is arguably the most likely to have a significant impact on the Chiefs passing game, but Richard Sherman at +8000 is the most likely to make a couple of splash plays that turn the game. From a Chiefs’ point of view, Tyrann Mathieu is perhaps the most likely at +10000, but if the Chiefs defense dominates this game, then it will be a team effort more so than an individual stand out.

I just wanted to touch on two names that I do believe can have an impact. Mecole Hardman is +6600; he made a massive impact in swinging the game against the Texans and has the speed to be a force in both the return game and the passing game. Richie James does have plenty of speed for the 49ers, but his small role offensively means he would have to be spectacular on kickoffs in a game in which I am not expecting to see many punts. His odds are not widely available, but he can be found as high as +30000 on some sites.

There are plenty of interesting potential plays in this one, but I have narrowed it down to two offensive selections on each team, with a big priced “wild card” thrown in. In total, I am spreading two units across my five 2020 Super Bowl MVP prop bets.

Already this week, I have looked to take advantage of some early lines available in this game. The 49ers are the more complete team, ranking top-10 in both offensive and defensive DVOA this season, and I think they should be slight favorites in this game. Therefore, I will happily take the points to cover me for a close loss.

This game does strike me as being high scoring. Both offenses are capable of moving the ball and should both easily get into the 20’s, and could both get into the 30’s. I am happy taking the over at 53.5 points, but would also be looking to potentially move that line down into the high-40s and pair it with something if I can.

Another way to play with the total is to take advantage of the total touchdowns market. Currently, you can get over 6.5 touchdowns at +110, which feels like a value to me with two high-octane offenses set to do battle.

Stay tuned for more plays throughout the next few weeks on Twitter @pfnbets and stay up to date on all of your NFL news @PFN365.