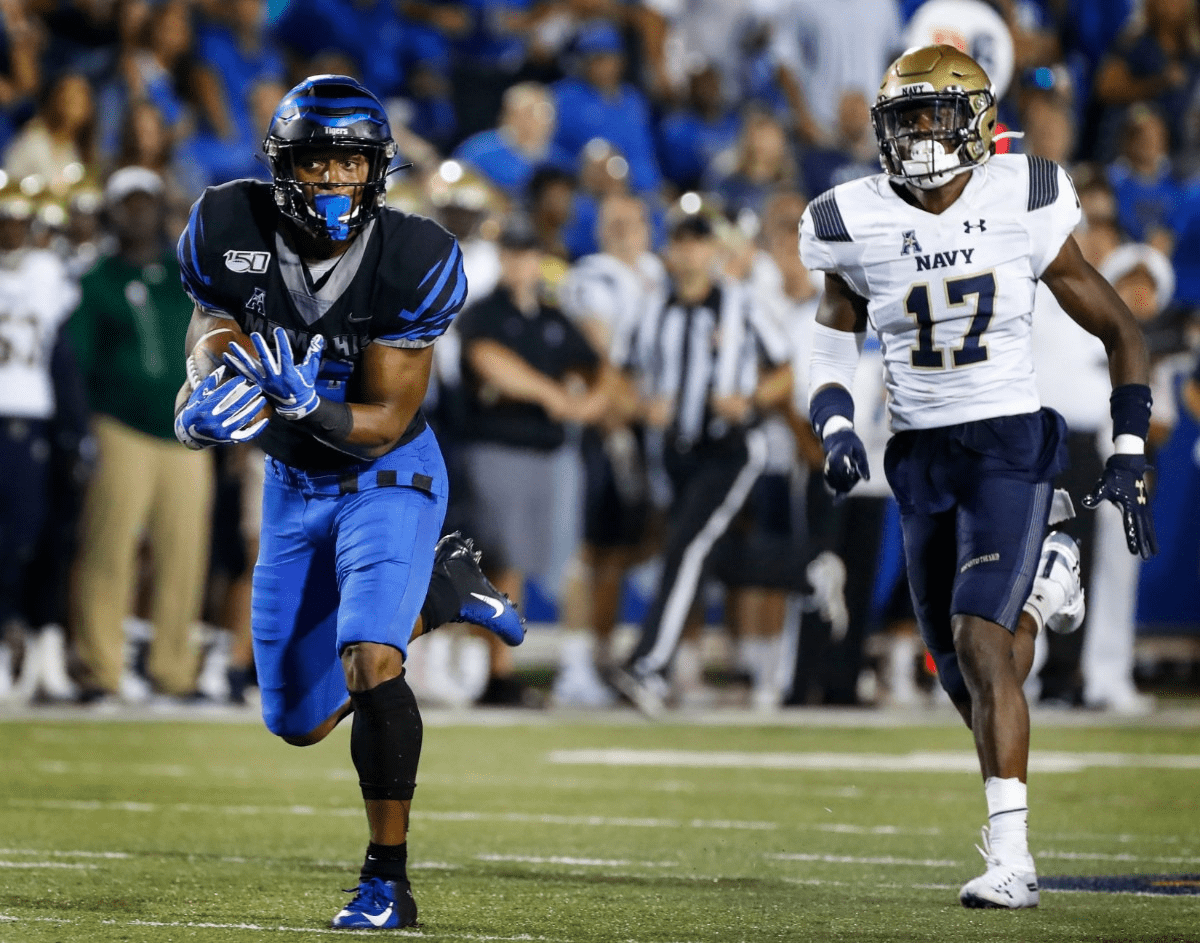 The NFL Scouting Combine is often thought of as the most important phase of the pre-draft process. For many, the showcase will prove to be a career-defining moment in their lives. Players will be poked and prodded as they go through an extensive medical evaluation, a seemingly endless wave of team and media interviews, athletic testing, and finally, the on-field workouts. In recent years, it has been when the lights have shined brightest at Lucas Oil Stadium that overlooked prospects emerge with stellar performances, effectively elevating their stock to make themselves viable draft options. This piece highlights ten 2020 NFL Combine sleeper prospects poised to elevate their draft stock with standout showings in Indianapolis.

Approaching his final collegiate season, Antonio Gibson was in a race against time; he hadn’t produced much relevant film in three seasons. He spent his first two seasons at East Central Community College, and consistent playing time was far from a guarantee on a loaded Memphis offense.

Despite limited usage, Gibson demonstrated his value as a versatile weapon, amassing 38 receptions for 735 yards (eight touchdowns), 33 carries for 369 yards (four touchdowns), and 23 returned kicks for 645 yards and a touchdown. The 6-foot-2, 220-pound dynamo maximized his 71 offensive touches to earn a highly coveted invite to the Reese’s Senior Bowl, where he spent the week as a running back.

The stage is set for Gibson, a supremely explosive athlete who is electric with the ball in his hands, to have a strong showing as a sleeper prospect at the 2020 NFL Scouting Combine. The offensive juggernaut’s breakout senior campaign, followed by a quality week in Mobile, put the Memphis star squarely on NFL radars as a potential late-round find.

If he tests well in Indianapolis, however, it’s feasible to think he can garner top-10 consideration at his position. Though Gibson is listed as a wide receiver on the official NFL Combine invite list, his primary role will likely be running back at the next level.

You would be hard-pressed to find many 6-foot-3, 240-pound running backs at the college level with the burst and uncanny footwork of Olonilua. What’s more: The hulking running back possesses the patience of Le’Veon Bell, the innate vision to navigate through even the narrowest of running lanes, and the elegant footwork to cut on a dime.

Olonilua doesn’t have the gaudy rushing totals that many of his peers in Indianapolis will — he never surpassed 135 carries or 635 rushing yards in a season — but he has the athleticism and measurables to climb draft boards with a strong showing next week.

I expect Olonilua to run somewhere in the 4.4s and clear the 40-inch mark in the vertical.

LeVante Bellamy can flat-out fly. In fact, the Western Michigan standout reportedly ran a blistering 4.28 40-yard dash (laser-timed) last June. Bellamy played in 48 games for the Broncos, totaling 617 carries for 3,720 rushing yards and 35 touchdowns. He also added 57 receptions for 370 yards and a touchdown out of the backfield.

Bellamy parlayed a prolific senior season into an invite to the East-West Shrine Bowl, and while he was somewhat overshadowed by the likes of James Robinson and Benny LeMay in St. Pete, he put together a solid week of practices in his own right. Showcasing his acceleration through the hole, breakaway speed, and fluidity as a pass-catcher, Bellamy proved he belonged amongst the premier talent in college football.

At 5-foot-9, 190 pounds, Bellamy doesn’t possess prototypical size for an NFL running back, so he will need to test well at the NFL Combine for draft consideration. One of the fastest running backs in the nation, don’t be surprised if Bellamy contends for a top time in the 40-yard dash and catapults himself into Day 3 territory.

Lost among the logjam of talent at the wide receiver position in this draft class, Quartney Davis is a name I anticipate to emerge from Indianapolis as a viable Day 2 option. Davis registered a modest 54 receptions for 616 yards and four touchdowns in 2019, but the intriguing talent managed to earn himself an invite to the Reese’s Senior Bowl last month.

Though he only averaged 11.4 yards per reception in 2019, I believe that was largely a byproduct of the offense; Davis has legitimate 4.3 speed and is a remarkably polished prospect that can run a vast assortment of routes. While I fully expect the former track star to run a sub-4.4 in the 40-yard dash, I believe he’ll really open some eyes during the on-field portion, where his route running precision will set him apart from his peers.

I have Davis slotted as an early third-round pick, and feel confident that looking back, he will prove to be one of the top producers from this stacked class.

Curiously underused during his four-year run at Florida, Tyrie Cleveland is arguably one of the most underrated offensive prospects in the 2020 NFL Draft, and one of the biggest 2020 NFL Combine sleeper prospects.

While Cleveland had the talent to assume the top receiver role in a crowded Gators receiving room, he instead served as a complementary piece, amassing 79 receptions for 1,271 yards and eight touchdowns for his career.

Despite an underwhelming senior season in which he caught just 25 passes for 351 yards and a touchdown over 12 games, Cleveland’s tantalizing athleticism earned him a late Senior Bowl invite as an injury replacement. In Mobile, Cleveland showcased his clean releases, long speed, and ability to track the football.

Cleveland is an explosive athlete and a legitimate sub-4.4 candidate. Though his route running will need some refining to earn a role at the next level, speed threats come at a premium in today’s NFL. If he performs as expected, a player with Cleveland’s upside and athletic profile almost always commands a late-round flier.

Overshadowed by his offensive counterparts Parris Campbell, Terry McLaurin, and Johnnie Dixon for most of his career, Binjimen Victor quietly put together a quality body of work during his four-year tenure at Ohio State.

Victor finished his Buckeyes career with 83 receptions for 1,340 yards and 18 touchdowns. He saved his best for last, however, reeling in a career-best 35 receptions for 573 yards and six touchdowns in 2019. His breakout senior campaign prompted an invite to the prestigious East-West Shrine Bowl, where he was arguably the most talented pass-catcher in attendance.

At 6-foot-4, 199 pounds, Victor boasts 4.3 speed to go along with an outstanding catch radius. Armed with impressive measurables, if Victor runs well and excels in the drills, he could potentially make a McLaurin-like surge up draft boards.

Ezra Cleveland played in 40 games over three seasons at Boise State, earning first-team All-Mountain West Conference honors in back-to-back seasons (2018-19). The 6-foot-6, 310-pound left tackle is extremely agile and light on his feet, and is as athletic of an offensive lineman as you will find in the 2020 NFL Draft. I envision a Tytus Howard-like performance from the former Bronco in Indianapolis.

Even after finishing third in the nation in sacks (15.0) and second in tackles for loss (21.5) in 2019, Alex Highsmith still isn’t garnering the buzz that someone with his skillset and production warrants.

Assuming he weighs in between 242-245 pounds in Indianapolis, evaluators are sure to be intrigued by Highsmith’s scheme versatility as a potential 4-3 defensive end or 3-4 outside linebacker. A tremendous athlete, it wouldn’t surprise me to see Highsmith run between a 4.65-4.7 40-yard dash.

I have Highsmith rated as a Top 100 prospect in the 2020 NFL Draft; if he tests like I think he will, however, the ascending talent will continue to soar up draft boards and could hear his name called as early as the third round.

Troy Pride is a prime example of someone who utilized the Reese’s Senior Bowl platform as a launching pad into what some are now expecting to be a dominant performance at the NFL Scouting Combine.

At 5-foot-11, 194 pounds, Pride won’t be the most physically imposing cornerback in Indianapolis, but he possesses track speed, fluid hips, and some of the quickest feet of any defensive back in the 2020 NFL Draft. Pride seems like a lock to run in the low 4.3s, and coupled with how he performs in the positional drills, he could ultimately end up shaking the early Day 3 sleeper label and earn the distinction of becoming one the top-10 cornerbacks taken.

To me, Kyle Dugger is no longer a sleeper prospect, but a convincing performance at the 2020 NFL Scouting Combine could very well vault the Division II star into unanimous second round territory.

At 6-foot-1, 220 pounds, Dugger has everything teams look for in a safety: Size, athleticism, range, explosiveness, and big-play capability. Dugger’s college production was off the charts, so much so that it only took seven games for the Lenoir-Rhyne star to earn himself the 2019 Cliff Harris Award, a prestigious honor given to the top defensive player in the Division II ranks.

Dugger is built in the mold of the new age NFL defender, in that he has the requisite size and range to handle athletic tight ends up the seam and track dynamic running backs out of the backfield. Players of his skill set are now in high demand, as the league continues to trend towards heavy 12 personnel and spread offenses. That said, if Dugger can outperform his competition and continue to build momentum, there is a realistic chance that his ever-soaring draft stock could rocket him into the second round.