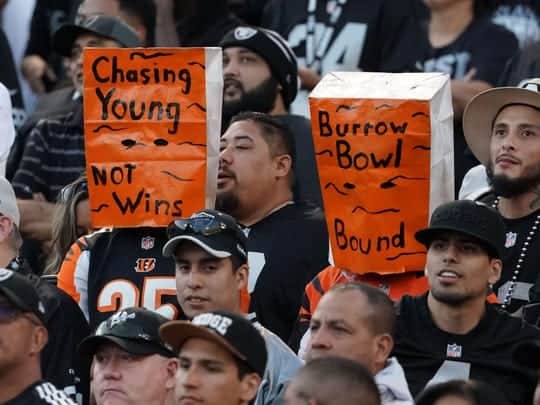 As the NFL season enters its final week, we get a virtually complete look at which teams will be drafting in the top five picks and what their biggest needs are. Though the draft process is fluid, we also have a solid idea as to which players will be viewed as the top players in the class. As we inch closer to the 2020 NFL Draft, who might be coming off the board for the teams trying to dig themselves out of the cellar? Let’s take a closer look.

Each team, besides the Bengals, will need a list of players they’d like instead of holding out hope for one. Because of that, I’ll be giving each team three prospects that fit what they’ll be looking for. This way, you can both familiarize yourself with each team picking and what players they should be looking at. I’ll also be naming a player I view as the “dream prospect” for each team and the percentage in which I believe that player will be available. This is quietly satisfying, as I know most of these teams will not be able to get their top prospects. These are the five worst teams in the NFL, their biggest needs, and three players I believe they are most likely to select.

With the NFL regular season ending, chatter regarding 2020 NFL Draft prospects will quickly pick up. Get to know who they are and who may be able to help your favorite team next season and beyond with our draft news and analysis.

What a surprise the Dolphins have been this year. After the front office stripped the roster for draft capital, many believed this team would be the worst in NFL history. First-year head coach Brian Flores had other ideas, as he led his depleted roster to a four-win season. His players want to play for him and it shows on the field. They’re building a strong culture in Miami.

Even though there are plenty of holes on the roster, none is more important than that of the quarterback. Ryan Fitzpatrick, while fun, should never be the long-term plan at QB. Miami does have former first-round pick, Josh Rosen, still on the roster, and if they decided to use their draft capital to build around him, I’d be happy. However, I feel as though that isn’t the plan, given the fact that they only started him for three games this season.

This quarterback class has a top-tier of players that is comprised of LSU’s Joe Burrow, Alabama’s Tua Tagovailoa, and Oregon’s Justin Herbert. The Dolphins will evaluate these three QBs and should take their highest-ranked one that is still available at their pick. As for the Dolphins’ other picks…well…list them on a wall, close your eyes, and toss a dart.

The Giants got their franchise QB in last year’s NFL draft. That’s step one. Now they must invest in someone to protect him, and someone to rush the opposing passer. Those are the steps to building a successful team. The Giants have found solid production from free agent Markus Golden, as he’s registered 9.5 sacks this season. However, the Big Blue are still lacking blue-chip talent. Their defense is littered with needs on all three levels, and they could use help in the receiver room, too.

The Giants’ needs in the 2020 NFL Draft are aplenty and spread out all throughout the roster. Their linebackers are some of the worst in football, their top pass rusher is Golden, who’s on a one-year prove-it deal, and they could use a jolt of energy in the wide receiver room (though I am a massive fan of rookie Darius Slayton). The Giants need talent, and that’s what they’ll get with their fifth top-10 pick in six years.

There are a number of players the Giants could take in the top-5 that would immediately provide an upgrade. They could look to bring in a young tackle like Andrew Thomas or Tristan Wirfs. If they wanted to boost their defense, they could do so via Clemson’s Isaiah Simmons.

However, of all the players in the draft, the Giants want one more than any other. That is Ohio State’s Chase Young – the best player in the class, at one of New York’s biggest needs. Unfortunately, the odds of Young making it past Washington and Detroit are slim to none. You could say that the Young to NYG train has gotten old. Get it?

Looking for the latest 2020 NFL Draft underclassmen declarations? Our database of over 90 players has rumors from PFN Draft Insider Tony Pauline, confirmations, and those who have announced that they are returning to school.

After an eight game losing streak, the Lions have catapulted themselves into the top-5. Their Week 1 tie is actually the only thing keeping them behind the Redskins in terms of draft order. The Lions owners have made it clear that head coach Matt Patricia and GM Bob Quinn will be back for next year. I believe that’s fair judgment, as the Lions lost Matthew Stafford for half the year. It’s hard to win games without your franchise guy.

The Lions roster is actually one that I feel is built to be competitive. They have talent on both sides of the ball, and a quarterback who can win football games. They just need to find that spark plug. Their team needs aren’t so obvious that they must focus on one position, but can instead choose to select the best player available. They need help primarily on defense, but a receiver with some speed would also be a nice match.

The two players that I think will most commonly be mocked to the Lions are Auburn’s Derrick Brown and Ohio State’s Jeffrey Okudah. Both players make sense for Detroit and there really isn’t a wrong answer. If I was making the decision, I’d go Okudah because he’s my higher-ranked prospect, but I wouldn’t be upset if they took Brown.

My biggest concern with Detroit is their linebackers, and I think Isaiah Simmons would also be a perfect fit. Unfortunately, the Lions have historically never taken someone like Simmons. Simmons trades weight for athleticism and coverage skills, and that’s not what Detroit or Matt Patricia has ever done. He’d be a great fit, but it seems unlikely. Similar to New York, and really every other NFL team, the Lions would love to land Young.

The Redskins are talented and they’re also very young. Washington had more starts from rookies than any other team in the league in 2019. Over the past four weeks, their offense has been led by a rookie QB throwing to three starting rookie receivers. They also have rookies starting at outside linebacker, inside linebacker, and nickel cornerback. They’ve seen a ton of improvement from franchise QB Dwayne Haskins, and should move forward with him in mind.

The Redskins biggest team need is at left tackle. That is obvious. Haskins is the future and you have to protect your star quarterback. This would lead you to believe Georgia’s Andrew Thomas or Iowa’s Tristan Wirfs would be the favorites for the pick. However, in this case, you’d be wrong.

It’s not often that teams are granted the chance to select the best player in the draft, and in this case, the best player in the last three years. Ohio State’s Young should be the pick, as the Redskins aren’t a team good enough to pick for need yet. They need as much talent as possible, and Young isn’t a player you pass up on.

The Redskins can also look at the tight end, linebacker, cornerback, and safety position to fill their team needs in the upcoming NFL Draft. If they decided to collect a king’s ransom in exchange for a team moving up for Young, they should look at still acquiring talent. Tackle would be at the top of the list, but Okudah and Simmons should also get consideration, especially if the top tackles are gone.

The Bengals surprised me this year. I didn’t think they could be the worst team in the league. I thought an Andy Dalton-led team was good for at least 3-4 wins. I was evidently wrong. The Bengals have more talent than a 1-14 team, and with the right signal-caller, they could improve by five-plus wins next season. The issue is making sure they find the right signal-caller.

The obvious first choice is Joe Burrow. Burrow has been the best quarterback in college football and had maybe the best season in college football history in 2019. He’s accurate at all levels of the field, he’s very mobile despite not being overly athletic, and he’s a competitor. His team wants to play for him. He plays with a fire, something that isn’t taught, isn’t coached, and can’t be learned.

It’s the desire to win and to fight. It’s what makes Burrow the best quarterback in the class. The other two top quarterbacks will likely also be considered, as will Young. However, expect Joe Burrow to be the future of the franchise for the Bengals.

On Sunday morning, we published our latest mock draft. Be sure to check it out as we have six quarterbacks going in the first round, with three in the first nine picks.