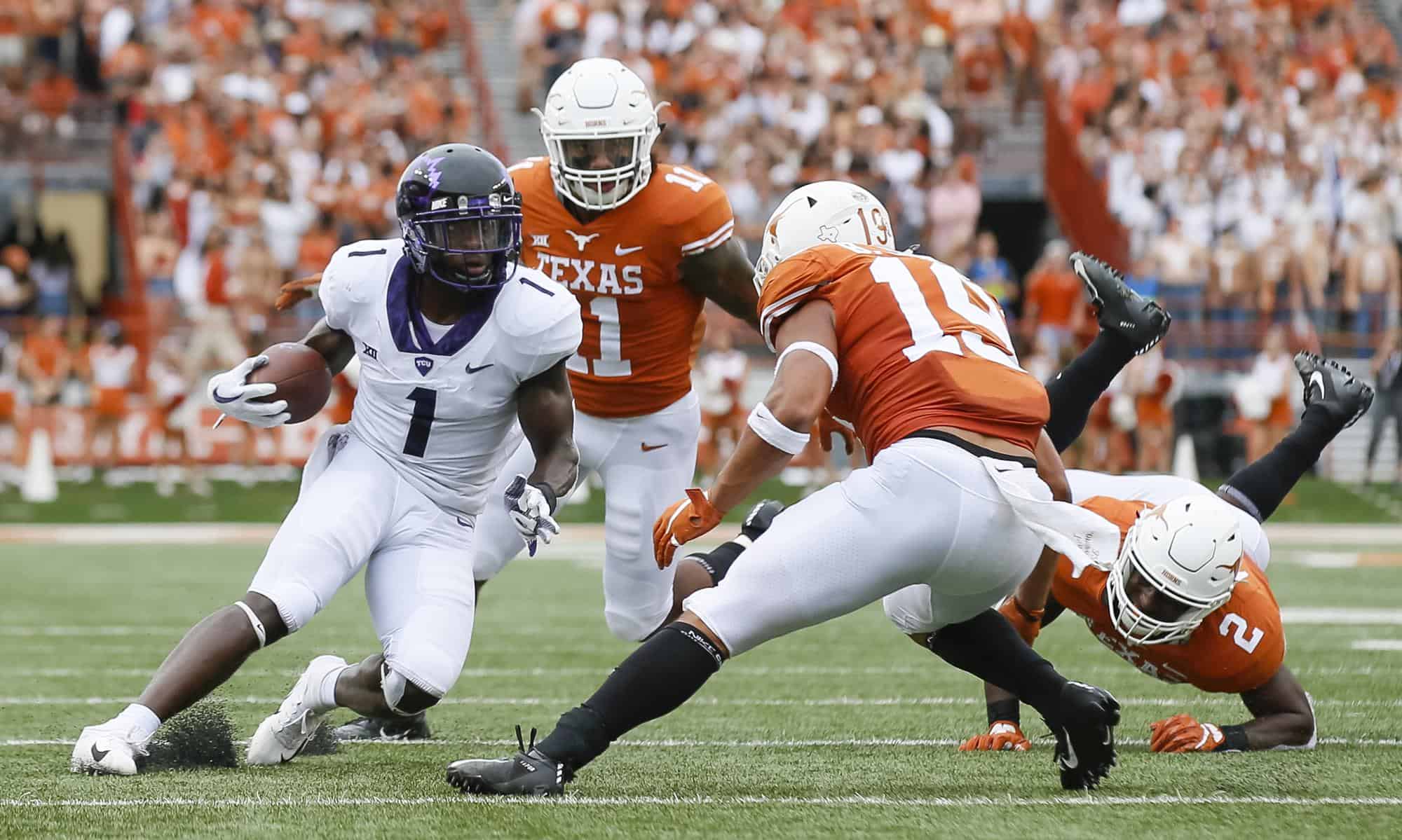 TCU is coming off a 7-6 season where their last football game played was the infamous Cheez-It-Bowl. Despite their relatively disappointing record, TCU featured quite a lot of talent on last year’s team, with two top-50 selections in L.J. Collier and Ben Banogu. For the 2020 NFL Draft, TCU has some players on the roster that could give them back-to-back first-round selections for the first time since Jack Spikes and Bob Lilly.

It’s very easy to stand out on a poor offensive unit. It’s even easier when you are a top-tier recruit on a team filled with 3-stars. That was Jalen Reagor last season for the Horned Frogs. He was the centerpiece of their offense, accounting for 39% of TCU’s receiving yards last season as well as leading the team in touchdowns. Reagor had 1,231 yards from scrimmage last season. No other TCU player accounted for more than 721 (RB Sewo Olonilua). His play was simply outstanding last season for TCU, and he’s receiving first-round buzz already because of this.

The NFL loves speed, especially in their receivers. Guys like Marquise Brown, DJ Moore, John Ross, and Will Fuller have all been picked in the first round due to their gifted speed on the field. Jalen Reagor has elite speed and then some. The first game I watched of the TCU team was the Baylor game. To say he stood out in a big way that game is an understatement.

Reagor had plenty of exciting moments for TCU, despite playing for a mediocre passing game. Hopefully, another season for TCU can help them figure out to throw the ball more to Reagor in time for him to declare for the 2020 NFL Draft.

Olonilua harkens back to the mold of hulking, powerful runners. At 6-foot-3, 235 lbs, Olonilua is one of the biggest running backs in the country. Unfortunately for him, this mold is quickly dying out in the NFL, with teams preferring shiftier, faster runners who catch well. However, there’s a place for guys like Olonilua in the league. Guys with his near-freakish power and work ethic are rare indeed.

Olonilua is a punishing runner, not hesitating to throw his shoulder down and fight forward for yards. With his frame, he usually wins those battles. What was surprising to me was how well his lower-body moved. At that size, most runners are stiff and struggle to shift their lower half. Not Olonilua.

While he isn’t LeSean McCoy in this regard, it’s nice to see that evident on his tape. If Olonilua can continue developing his apparent athleticism, it isn’t difficult to imagine NFL coaches wanting to bring him on board in the 2020 NFL Draft.

Niang could contend with Reagor to be TCU’s highest drafted player in the 2020 NFL Draft. Niang has been a lockdown right tackle for the Horned Frogs all season long. Niang did not allow a sack all season. Not one. When you line up against players like Ohio State’s Nick Bosa (who was just drafted second overall in 2019)and Chase Young (a projected top-5 pick in 2020), as well Texas’s Charles Omenihu (who mysteriously fell to the 5th despite being a talented pass rusher), not allowing a single sack is impressive.

Niang is explosive out of the gate with some really fluid feet. For a guy listed at 6-foot-7 and nearly 330 lbs, that kind of fire off of the line of scrimmage had my eyes popping. He’s got all the tools you could want in an offensive tackle, possessing a natural understanding of leverage on his opponents, which is surprisingly rarer and rarer in today’s collegiate offensive linemen. As he continues to hone his craft, Niang will be a huge riser up draft boards. He should already be near the top of many boards (way too low on many of them), but that will change as the season goes on.

A.J. Schulte is a NFL Draft writer for Pro Football Network. You can follow him on Twitter @AJDraftScout.