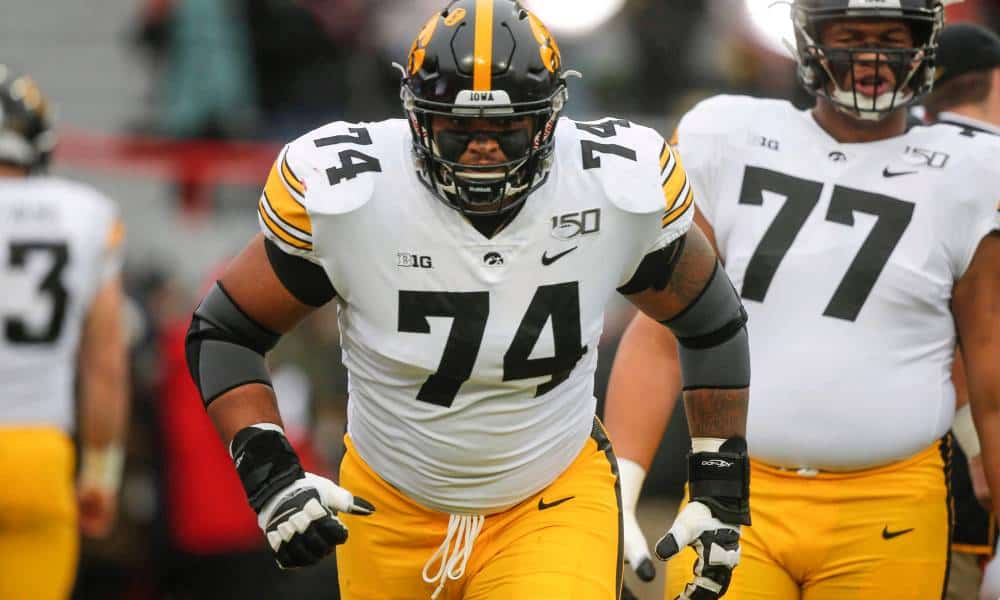 For the New York Jets, the past few months have given fans a reason to pause on their optimism for Joe Douglas. A poor season, followed by an underwhelming free-agent class, puts the New York fanbase and media increasingly closer to putting their general manager on blast. Of course, there is still time before fair judgment can be exercised, including Douglas’ first NFL Draft. In a matter of mere weeks, Douglas will be tasked with addressing a Jets roster in need of deep repairs. Here is an updated 7-round mock draft showcasing one way this may all go down.

Sam Darnold’s improvement is paramount in making New York a competitive franchise for the first time in a decade. To assume one’s growth is a treacherous call, but for the time being, a new starting quarterback won’t be something on the Jets’ wishlist. Le’Veon Bell’s play last year hit a low following poor offensive line play but looks to be the main focus of next year’s offense.

Free agency saw Robby Anderson depart to Carolina, leaving an already poor wide receiver room in an even weaker state. New York lacks a true number one receiver, recycling low-upside veterans and a plethora of slot receivers in an attempt to move the ball downfield.

The offensive line struggled mightily throughout the year, but to some extent was addressed in free agency. George Fant, Connor McGovern, and Greg Van Roten will likely slide in as starters, though only McGovern has a history of high-level play. Chuma Edoga’s play last year does not suggest too much to believe in, but for now, he remains the weakest link on the unit.

On the other side of the ball, no acquisitions seem eye-popping, but a handful of average players already improve a defense that saw success against the run last season. Pierre Desir will attempt to find his previous self after last season played host to a rather poor campaign. Additionally, Patrick Onwuasar will now provide necessary depth at inside linebacker.

A brief offseason scare almost saw the downfall of Quinnen Williams, though his talent should shine through in year two. He headlines a strong defensive line. Healthy seasons from Avery Williamson and C.J. Mosley makes the Jets interior linebacking pairings one of the best in the sport.

Yet again, the hole within the New York front seven lies in their pass rushers, who continue to struggle year-in and year-out. Jordan Jenkins re-signing makes for a constant at outside linebacker, but the other side remains a question mark.

In the secondary, Jamal Adams, Brian Poole, and Marcus Maye will waltz into next season as quality starters. Depth in the defensive backfield and ballhawks are still absent and should be addressed before the draft’s end.

Subsequently, it makes sense to separate these needs into tiers, where they can be interchangeable, yet still provide some semblance of order. Tier one needs are paramount to be addressed, tier two needs demand consideration, and tier three needs would appreciate the upgrade, but don’t require the attention of the prior tiers.

In the scenario that Tristan Wirfs falls out of the top ten, New York shouldn’t spend very long deciding who to draft. The uber-athletic, versatile tackle can step in at either tackle spot and quickly become a quality starter. A high-upside selection, Wirfs is already an incredible run blocker and has the tools to succeed in pass protection as well. Potential coaching changes won’t render him useless, as Wirfs is not only versatile but scheme diverse.

A staple in the OT1 conversation, Wirfs has the track record and traits to be a franchise offensive lineman. A plug-and-play at guard seems to be his floor, a higher floor than those left at 11. The upside/floor ratio Wirfs possesses puts him above names like Mekhi Becton, CeeDee Lamb, and K’Lavon Chaisson. A tier one need and a top-fifteen talent, Wirfs would be a slam dunk in the first round.

After injury concerns and a less than ideal combine, Laviska Shenault has seen his stock drop, likely to the later part of the top-50. Shenault is not a finished product, but his physical build and plethora of ways to make an impact create a target-rich with upside. He may make his living as a Z or slot receiver, rather than most prototypical primary options, but he is easy to feed. Getting the ball in his hands is a fast track to points, but he can also stretch the field. Shenault is similar to Quincy Enunwa, but his upside shouldn’t be passed on at 48.

With Darnold’s progression being urgent and far from guaranteed, boosting the offense must be prioritized. In a stacked wide receiver class, waiting for the second round shouldn’t scare front offices, and with Shenault available, he makes for a comfortable selection. Zack Baun, Noah Igbinoghene, and Lucas Niang were all options here, but the help the Colorado product brings to the passing game is most likely to make a significant impact on Darnold.

Formerly in the CB1 conversation, Bryce Hall is another talented prospect whose stock fell throughout the season. A severe leg injury ended his senior season, but Hall’s talent shouldn’t be affected too much moving forward. He can step in as a boundary corner from day one, bringing ball skills and enough chops in zone coverage to make plays and a sizable impact from the jump. With Clyde Edwards-Helaire, Cole Kmet, and Bradlee Anae on the board, positional value and a high floor prevail yet again.

This year’s draft class is lacking in the pass-rushing department, and Jonathan Greenard is one of the last startable edge rushers left. Primarily a defensive end, Greenard is a better fit for the Jets’ optimal defensive front, a 4-3, but may have the athleticism to play at outside linebacker. He is not incredibly bendy, but he plays the run well and has enough tools technique-wise to trust as a pass-rushing presence. He may be a riskier fit schematically, but New York is desperate for pass-rushing help, and without a considerable investment, Greenard is a risk worth taking. Brandon Jones, Tyler Biadasz, and Ben Bredeson all make compelling arguments for this selection, but the effect of an additional pass rusher could take this defense to the next level.

With offensive tackle already addressed in round one, Saahdiq Charles remains a developmental option, without the pressure to start year one. His ceiling is enticing, but raw technique tends to diminish his impressive athletic traits. As a fourth tackle. Charles is better than what most teams have and provides upside at a premium position. For these reasons, Charles is a better fit than A.J. Dillon, Darrell Taylor, or Robert Hunt.

Addressing the pressing need for safety depth is something that must be done before training camp, and Geno Stone presents an intriguing option. He is athletically limited but has the physicality and intelligence to stick on a roster. Stone can be a special teams contributor and hold down zones relatively well, even if his upside is limited. The Iowa product is a prototypical backup strong safety at the next level. He fills a need and won’t take much grooming, which is why I selected him over Khaleke Hudson, Leki Fotu, and Thaddeus Moss.

Simply put, David Fales shouldn’t make anyone comfortable as a plan-B to Darnold. With Darnold’s question marks and injury history, it makes sense to target a backup quarterback. In round six, there is not a more fun option than Cole McDonald. The gunslinger is certainly raw above the shoulders, but building upon his arm and athleticism could yield great returns. He’ll make plays, both good and bad, but at the very least will be an entertaining watch if Darnold goes down. The best quarterback available lands at 191 instead of Kelly Bryant, Tremaine Anchrum, or Julian Blackmon.

The final selection of this mock comes from one half of TCU’s stellar run game, Darius Anderson. A poor 40-yard dash was detrimental to his stock, as his play speed does not match his 4.61 time. A big-play threat and third-down option, Anderson can make himself useful in a variety of ways, giving the Jets a potential home run each time he touches the football. As a backup running back and potential special teamer, he provides more than many sixth-round picks can offer. The TCU product was selected over prospects such as Kendall Coleman, Harrison Hand, and Lamar Jackson.