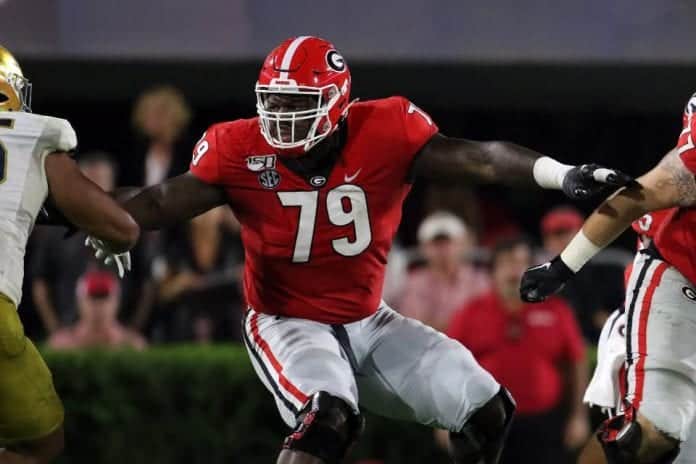 Every year, there is a group of players that fly under the radar, only to hear their names called on the first day of the draft. This year will be no different. Georgia's massive right tackle Isaiah Wilson headlines the group of first-round sleepers for the 2020 NFL Draft.

We all know the top names associated with the 2020 NFL Draft: LSU quarterback Joe Burrow, Ohio State pass-rusher Chase Young, and Alabama quarterback Tua Tagovailoa. However, there are some 2020 Draft first-round sleepers that will be overlooked, as history has shown us. While these players sit atop the big boards of many draftniks, they are certainly not the only players worth monitoring during draft season.

The run of offensive tackles in the draft is going to be fast and furious. First, there is the “Big 4”, which is the group consisting of Alabama’s Jedrick Wills, Louisville’s Mekhi Becton, Georgia’s Andrew Thomas, and Iowa’s Tristan Wirfs. After that, the second tier includes Houston’s Josh Jones and USC’s Austin Jackson. They won’t be the only players to hear their names called on day one.

Isaiah Wilson is a mammoth right tackle, standing 6’6″, weighing 350 pounds, and possessing a 35 1/2″ arm length. He is an extremely powerful player, who also possesses sound technique. In the run game, he is a people-mover, as he uses his power and leverage to obliterate defenders.

Not only is there a distinct possibility that Wilson hears his name called in the first round, but it might also be earlier than most think. Teams such as the Miami Dolphins, Minnesota Vikings, and Jacksonville Jaguars have shown interest in Wilson throughout the draft process.

The 2020 defensive tackle class is headlined by Auburn’s Derrick Brown and South Carolina’s Javon Kinlaw. The next best defensive tackle in the draft is TCU’s Ross Blacklock. Blacklock is quick, explosive, and utilizes his hands exceptionally well. He plays the game with an outstanding motor and possesses impressive first-step explosiveness. He can control the line of scrimmage and be a disruptive force, consistently making plays in the opponent’s backfield.

An Achilles injury in 2018 forced him to miss some time, but he bounced back the next season. Two teams that would be perfect scheme fits for Blacklock in the first round would be the Las Vegas Raiders and the Seattle Seahawks. If an NFL team is searching for a boost along the defensive line, Blacklock is a player that can help immediately.

The 2020 wide receiver group has the potential to be historically good. Jerry Jeudy (Alabama), Henry Ruggs III (Alabama), and CeeDee Lamb are the headliners of this group, and should all be selected within the top-15 picks of the draft. Next in line is LSU’s Justin Jefferson, who should find himself selected within the top-20. After that, it is wide open, with names such as Brandon Aiyuk (Arizona State) and Tee Higgins (Clemson), but one player whose draft stock is ascending is Baylor’s Denzel Mims.

Mims’ performance at the Reese’s Senior Bowl skyrocketed his draft stock. He displayed impressive explosiveness and sound route-running ability. He possesses soft hands and consistently wins the contested catch. He is a big-bodied target, standing at 6’3″ and weighing in at 207 pounds, who can also bring a physical brand of football to the table.

There are plenty of receiver-needy teams scheduled to pick at the end of the first round, such as the Green Bay Packers, Minnesota Vikings, and Baltimore Ravens that would make great landing spots for Mims.

The trophy for being the first safety selected in the 2020 NFL Draft is wide open. The versatile Antoine Winfield Jr. has as good of a shot as anyone to be that player. We know he has extraordinary bloodlines, as his father was an upper-echelon cornerback for over a decade. Winfield, Jr. is fluid, instinctive, and possesses elite ball skills. In 2019, he had seven interceptions, which was fourth best in the country. He isn’t afraid to aid in run support and possesses amazing center field coverage skills.

Winfield, Jr. can line up at safety but offers the versatility to move inside to nickel-cornerback. He comes with high football intelligence, as he is a true student of the game. He checks a lot of the boxes necessary to be a future Pro Bowl talent.

Due to his versatility, athletic profile, and production, it would not surprise me in the least bit to hear his name called on the first night of the draft. Teams like the New England Patriots, Miami Dolphins, and San Francisco 49ers would be great schematic fits for the dynamic safety prospect out of Minnesota.

A.J. Terrell is the last big name in my list of draft sleepers. Terrell’s season ended on a poor note, as he was abused by LSU wide receiver Ja’Marr Chase in the 2019 National Championship game. However, it is not time to give up on him just yet. Chase might just be the best wide receiver in college football, and he has the ability to beat just about any cornerback he faces. Prior to this performance, Terrell was widely regarded as a potential first-round pick in the draft community.

He offers a lot of positive traits, such as his size, speed, and physical play. He is ideally a press coverage cornerback, as his strengths allow him to jam receivers at the line of scrimmage. He also helped his draft stock by running a 4.42 40-yard dash at the NFL Scouting Combine.

With there being many cornerback-needy teams in the league, Terrell has a real shot to be selected in round one. After Jeff Okudah (Ohio State) and C.J. Henderson (Florida), there is a pretty steep drop off, so he has a real shot to go in the early 20s with teams like the Las Vegas Raiders, Jacksonville Jaguars, Philadelphia Eagles, and Minnesota Vikings really needing help at the cornerback position.