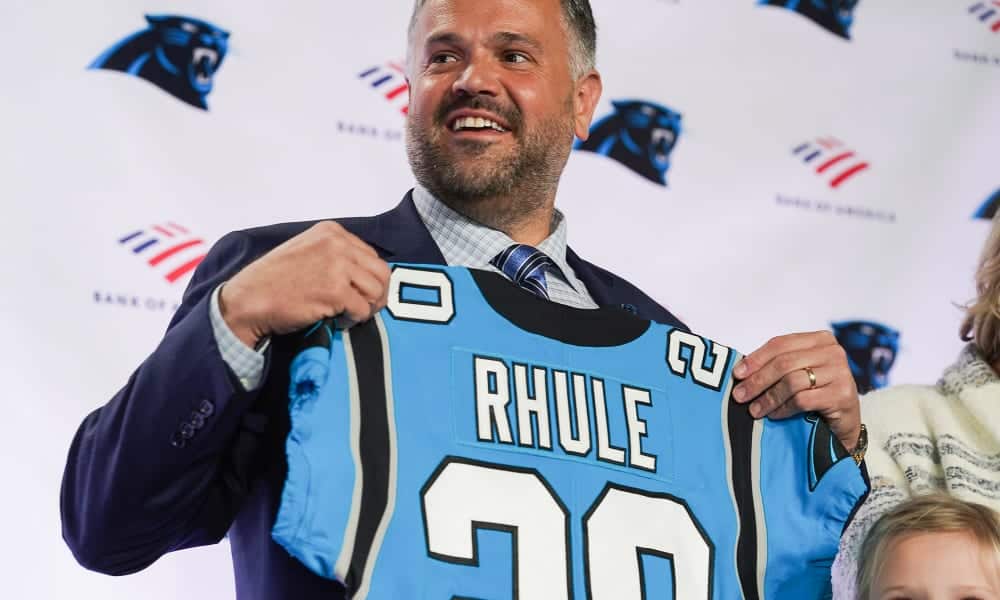 How do we even begin to describe the Carolina Panthers offseason? I’m not going to try. A complete rebuild seemed likely with a new coaching staff and the departure of the team’s MVP quarterback. Yet the team signed wide receiver Robby Anderson to a $20 million deal, traded away 26-year-old Trai Turner for 31-year-old Russell Okung, and extended Christian McCaffrey as the league’s highest-paid running back, all on top of signing QB Teddy Bridgewater to a three-year, $60 million deal.

But while the offensive moves signaled a team trying to win now, the defensive roster was completely gutted. “Rebuild”, “re-tool”, or whatever lingo Marty Hurney wants to use, the Panthers have a lot of work to do in the 2020 NFL Draft.

Defense: Yep, the defensive roster as a whole is a need for the Panthers. The depth chart is sparse at each position, and some can’t even be filled out at this point. Cornerback is probably the biggest need on defense, with Donte Jackson, coming off an underwhelming 2nd season, as the only formidable starter. The gutted interior defensive line needs to be built back up with young talent around Kawann Short. The pass rush from the outside lacks depth behind Brian Burns, who still needs improvement in run defense. Linebacker depth is thin and lacks a future outside of Shaq Thompson. The outlook is bleak on the defensive side of the ball.

Interior Offensive Line: This unit was also gutted in the offseason with the trade of Turner and free agency departure of Greg Van Roten. Center Matt Paradis is also under contract for two more seasons and is 30 years old. The Panthers will likely deploy Greg Little at left guard, but Okung is only under contract for one season at left tackle, where Little would ideally end up in 2021 and beyond.

Tight end: Ian Thomas still hasn’t proved he can be the Panthers TE1 for the future. He has shown some promising flashes, but those flashes need to turn into production and reliability in his third season. Even if Thomas blossoms into his full potential this season, the Panthers could use another big-bodied pass-catching TE given their smaller-statured wide receivers.

Javon Kinlaw’s combination of explosiveness, athleticism, and size makes him a bonafide top-10 prospect. I don’t believe there is any realistic way the Panthers could trade back and still land Kinlaw – unless they trade back just within a few spots to a team like Jacksonville at 9th or Cleveland at 10th – he’s simply too good of a prospect. Paired with Short, Kinlaw offers a solid foundation up-front for the Panthers defense to start to build on.

The 2020 wide receiver class oozes with talent, and it’s likely a first-round-caliber WR will slip to the Panthers in the early stages on the second round. While needs are much more pressing on the defensive side of the ball, I don’t believe Matt Rhule and Joe Brady will leave the 2020 NFL Draft without giving themselves another offensive playmaker to work with. Laviska Shenault Jr. would be one of the best players available on the board here, and for a team in rebuild mode, that’s the much more effective long-term strategy than drafting for need.

If Alex Highsmith is on the board after the 68th overall pick, the Panthers are running to the podium to select him.

I was talking to a scout today and asked him what player was his biggest sleeper and he said Alex Highsmith the pass rusher from UNC-Charlotte. He said do not be surprised if you hear his name 2nd round.

The Panthers have shown a great deal of interest in the native North Carolinian throughout the pre-draft process, especially at the NFL Combine, where Highsmith dominated. Highsmith is a high-character individual – at the Combine, he shook the hands of every member of the media around his table before his interview began (before COVID-19, if you were concerned). He has continued his upward trajectory up to this point in the pre-draft process all the way from when he walked on at UNC-Charlotte, and would later become Conference-USA Defensive Player of the Year. He would add much-needed help on the edge for the Panthers, who need reliable every-down players at the position.

Sometimes in the draft, you gamble on a player’s upside. Other times, you take a player that is a proven baller. Amik Robertson fits the latter description. He has been a playmaker from day one for the Bulldogs, amassing 14 interceptions in just three seasons. Robertson oozes success and confidence. His height (5-foot-9) will keep him towards the middle stages of the draft, but he has the ability and the upside to be one of the better nickel cornerbacks in the NFL for years to come.

Kevin Dotson was a first-team All-American, yet somehow snubbed from the NFL Combine. Like Robertson, Dotson couldn’t help but be successful collegiately, and could easily become a day one starter at right guard for the Panthers.

Like Robertson and Dotson, Kindle Vildor comes from one of the lesser-known FBS programs, yet made a name for himself among the best in all of college football. Vildor was named a second-team All-American in 2019. He has the talent to compete for the starting cornerback spot across from Donte Jackson given the current state of the Panthers’ roster.

Rhule has not been shy about bringing players in that he has a connection with. Bravvion Roy was at the center of Rhule’s defense at Baylor, and put together an impressive 2019 season with 5.5 sacks as a nose tackle. He could compete for snaps in the middle of the defensive line and allow Kinlaw and Short to kick out to the ends.

Another Rhule connection, Harrison Hand transferred to Temple from Baylor and decided to forgo his senior season to enter the 2020 NFL Draft. Hand had a solid junior season with three INTs and four tackles for loss. The Panthers really can not draft enough cornerbacks to compete for spots on the depleted depth chart, meaning Hand would have a really decent chance to make the roster.

Give us your feedback on Twitter @PFN365 to tell us your thoughts on the Panthers 7-round mock draft by @GallimorePFN.