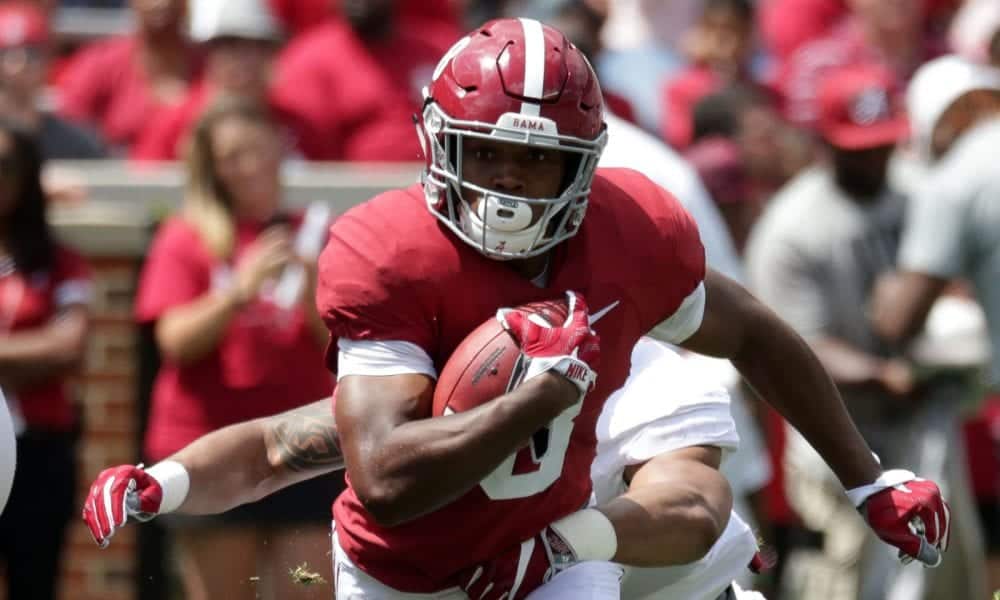 Photo: USA Today
What's in this article? Click to show
The 2019 NFL Draft is coming up in a few months, and there are some teams looking for running backs.
Size and Strength
Speed
Agility
Balance
Catching and Route Running
Blocking
The Final Verdict

The 2019 NFL Draft is coming up in a few months, and there are some teams looking for running backs.

Some of these running backs will be more speed, some with size and strength, and some that are aerial threats as well. There have been a few running backs whose names have been spurring throughout the NFL since the end of the college football season. As the 2019 NFL Draft gets closer, two running back prospects are getting plenty of buzz – Alabama’s Josh Jacobs and Georgia’s Elijah Holyfield. But, who is better?

Jacobs is entering the draft as a 21-year-old second string running back at Alabama, backing up senior Damien Harris. Jacobs, classified at 5’10”, 216 pounds, finished his junior season with 120 rushing attempts for 640 yards and 11 touchdowns. He also had 20 receptions for 247 yards and 3 more touchdowns. Throughout most mock drafts, Jacobs is projected to be the first running back taken off the board in the mid-to-late first round.

Holyfield, son of heavyweight boxer Evander Holyfield, is a 21-year-old running back who shared his time with D’Andre Swift at Georgia. Like his father, his build is that of a heavyweight with a stature of at 5’11”, 215 pounds. In his junior season, Holyfield finished with 159 rushing attempts for 1,018 yards and 7 touchdowns. However, he only had 5 receptions for 40 yards and no touchdowns.

I went through the film and decided who would be the better pick through a variety of classifications. There were a few categories I studied and graded each one to see who is more qualified in. Those categories included size/strength, speed, agility, balance, route running/catching, and blocking.

The first category was the size and strength of each running back. As stated above, they are both about the same size, but they both use their size for different uses.

After going through film, Jacobs is not afraid of contact and is willing to initiate contact as well. He will lead with his helmet and lower his shoulder to fight for more yards. By the end of his season, he broke 34 tackles and had 493 yards after contact too. Holyfield took short and tough strides with powerful legs that allowed him to carry his opponents. He would take piles of people on him and carry them for a few extra yards every time. Holyfield had 650 yards after contact but did not have as many broken tackles. Instead, he would force his opponent to give up some more yards while being tackled.

Overall, this category was tough, but with Jacobs initiating contact and blowing through guys, he has a slight edge in this category.

In the next category, both guys did not show anything too promising. Jacobs was an above-average running back when it came to speed. He was able to round a corner but not break through the secondary many times. Holyfield was just the same. However, his speed was just a bit slower as he sometimes got caught up by the linebackers. Holyfield is expected to run a 4.55 in the 40-yard dash at the NFL Combine while Jacobs is expected to run a 4.5 flat.

As you can see, Jacobs was also a returner for Alabama so the outside gaps and a few blocks can get him from one side of the field to another. Holyfield, on the other hand, struggles to beat a corner after getting the corner off-balance with a jump cut. Speed goes to Jacobs.

The next category is agility. With both of these running backs being more power backs, they don’t have the most flattering agility or footwork. Both of these guys rely on basic jump cuts and a quick burst to get a few more yards until they need to lower their shoulder and hit you. However, if you go back to the speed and incorporate that with this video and his footwork, Jacobs is versatile and quick enough to lower his hips and change direction fairly quickly. On the other hand, Holyfield bounces to the left and does a simple hesitation and go that keeps his feet close to him and take his short, steady strides. Both running backs are agile, but easily not the most agile in this draft. This category is a 50/50 coin toss that most likely will fall toward Jacobs side again.

Balance is where Holyfield takes over. Jacobs will lead with his helmet and pack a load, but Holyfield is a shorter, stronger player with most of his size and strength going into his muscles. Jacobs does have great balance, but in the video below, Holyfield can shed off a few tacklers at his legs and bounce off them for a touchdown. Holyfield keeps a low center of gravity and continues to drive forward as well as keep his head up which allows him to stay afloat and finish in the end zone. This category falls to Holyfield.

Next is catching and route running. This was an obvious choice as Holyfield only had 5 catches with an average of 5 yards. Jacobs, on the other hand, was able to run many different routes and was an average route runner as well as catching running back. In this video, Jacobs runs a simple go route that splits in between the linebackers and safety. He then restacks on top and catches the ball with a slight burst of speed to finish off his catch and run for one of his many touchdowns. He was also useful in many flat routes where he would end up running downhill and lead with his shoulder. Easy win in this category for Jacobs.

Lastly is the blocking aspect. On the passing side, neither one of these running backs is special at blocking. However, Jacobs has a slight edge again with his combo blocking in runs and passes. He is also able to read blitzes and pressure better than Holyfield.

In this video, Jacobs is able to pick up a blitz from the left side while lined up on the right side of the quarterback. He does not have an outstanding block, but he is able to chip block his opponent and allow his quarterback, Tua Tagaviola, roll out to his right to run. In the next play, he lead blocks for his teammate Najee Harris and powers through a linebacker and continues to run down the field with Harris as a lead blocker.

Holyfield struggled to pick up the pressure down the middle in his part of the video. Also, at Georgia, he did not have to lead block as much as the running backs did in Alabama, so he lacks the experience in that aspect. Jacobs takes another category.

These running backs are close to each other in talent, but Jacobs has slight advantages in almost every aspect. Jacobs will most likely go late first round, early second round while Holyfield drops to the third round.

In this article:Elijah Holyfield, Josh Jacobs