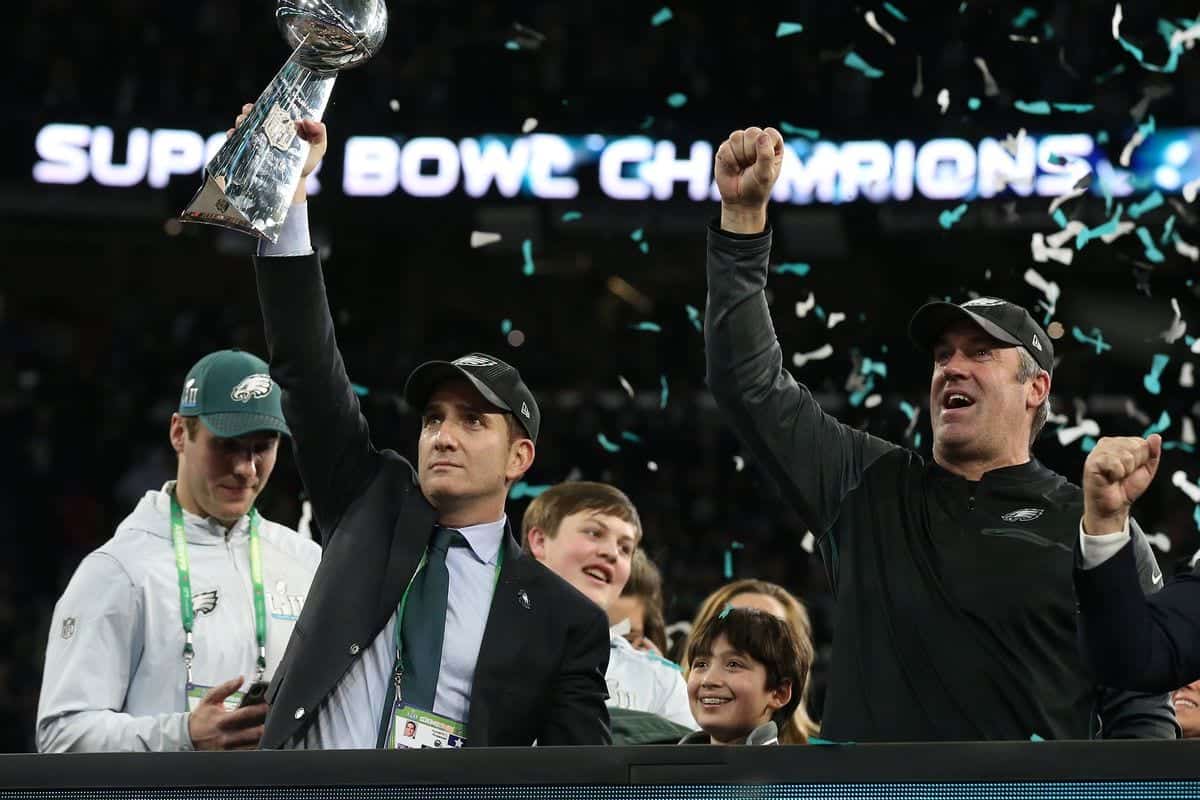 The Philadelphia Eagles are only a season removed from a Super Bowl victory. With seven choices in the 2019 NFL Draft, the Eagles will look to add depth to key positions.

The Philadelphia Eagles are one of the most exciting teams of the NFC East coming into this year. After winning their first Super Bowl a year ago and reaching the playoffs again, the team heads into the 2019 NFL Draft and season without any glaring holes.

On offense, Nick Foles signed with a hopeful Jacksonville Jaguars team, leaving Carson Wentz to lead the way. Philadelphia will need to bolster their offensive line to ensure protecting him and avoid injury for the third straight year. Brandon Brooks is recovering from an Achilles injury, and they’ll have to provide insurance considering left tackle Jason Peters is now 37 years old. General manager Howie Roseman worked his magic to acquire DeSean Jackson from the Tampa Bay Buccaneers and Jordan Howard from the Chicago Bears. Also, he added a tight end, Richard Rodgers. These moves provide depth at every skill position and only leaves the offensive line as a possible question mark.

What’s left to do is secure their draft choices. The Eagles have the chance to add the best player available at every selection considering how they’ve shored up both sides of the ball. Philadelphia is indeed in an enviable spot as a team in the NFC East, and could easily repeat as best in the division. This draft could provide difference makers and depth to ease a path toward a postseason run.

Using The Draft Network’s mock draft simulator, I took a shot at how Howie Roseman and head coach Doug Pederson could add that depth:

The Eagles are fortunate to have a safety like Malcolm Jenkins patrolling their secondary. Aside from him, there isn’t a real difference maker to make plays. Enter Adderley.

Adderley has had a quiet but good draft process, impressing with his fluidity and football intelligence at both the Senior Bowl and combine. He’s one of the few safeties that can play single high coverage, improving a team’s ability to blitz. Adderley would pair nicely with Jenkins, who’s a difference-making safety when he plays closer to the line of scrimmage.

Besides, Jenkins, Maddox, and Sendejo are the presumed front runners to contribute at the position this year regularly. Yet each one of them has nine years or more in the league. Adding a young playmaker to learn from such veteran leaders and provide insurance for the future is a smart move.

Philly has arguably one of the best offensive lines in the pros when healthy. The keyword here, however, is “healthy.” The aforementioned injuries and age are all concerns. And while center Jason Kelce signed a one-year extension just a month ago, he’s not getting any younger. I’m not arguing to replace these players, but the best teams have the best depth. Providing a versatile player that could plug and play immediately would be an asset.

Michael Deiter is an offensive lineman with experience at both guard and tackle. His Wisconsin Badgers pedigree will be very appealing, but it’s his power and intelligence that impress. Deiter could become a starter should Brooks need more time to recuperate. Moreover, Deiter could most certainly step up if Peters is injured, or if right tackle Lane Johnson plays on the left in that situation.

Again, Roseman and Pederson opt for the talent of the player to add to a rotation of depth.

Philadelphia, like their offensive line, is stacked on their defensive front. However, again, the best player available only four picks later can provide an infusion of youth and talent to a group of older players that can still produce. Omenihu is as good of an example of a three-down rusher. He has the length, grease in his hips, and hand usage to move all along the line and be a three-down player.

Most of all, his motor is going to stand out to the fans. He’s relentless and punishes opposing offensive lineman with consistent power from the first snap to the last. While he gets his pad level a little too high at times, I think he’ll earn playing time right away.

Some argue that he’s a first-round talent. However, if he falls to the next round, he could easily fill in as a Bennett clone.

Defensive coordinator Jim Schwartz fancies his ability to rush the passer. On every team he’s coached, there was exceptional talent on the inside and the ends. That’s where adding Hollins comes in.

Hollins is a speed rusher that will need some refinement in how he attacks against the run. He consistently tries to win with his speed on passing downs, but his length is an asset too. He’ll have to diversify his pass rush repertoire and hand placement once he gets working with defensive line coach Phillip Daniels.

I think his athleticism and competitiveness will be appealing to the Eagles. He’ll help shore up the depth and rotation on passing downs. Having that kind of depth will work wonders for them at the end of the season, pushing for a playoff berth.

If you want to understand how Jackson will change the offense in Philadelphia, check this article by PFN. Adding in Alshon Jeffrey and Nelson Agholor, the Eagles have a good group of starting receivers. However, there are still questions about Agholor. Rumor had it that he was a potential trade candidate this offseason, and his contract expires after this season. That makes wide receiver an area that needs to add young players to balance the starting-caliber veterans.

Morgan is one of the most underrated receivers in this draft. He’s a clean prospect to scout. His routes are polished, and Morgan excels in all aspects of the game, showing tenacity even with his run blocking. He possesses good body control, he’s a smooth route runner and was moved all over the formation for the Cornhuskers. Morgan is a real “jack of all trades.” I wouldn’t be surprised if he is not available at this point in the fourth round, but here, the Eagles get yet another steal.

After losing Jordan Hicks in free agency, the Eagles need to add a linebacker that plays with his “hair on fire.” Hansen is a high effort player whose competitiveness is evident on film. A converted safety, Hansen has the fluidity in his hips to pick up coverage responsibilities, a weapon against tight ends or running backs out the backfield.

Hansen has a chance to become a dark horse contributor for any team. His speed, burst off the snap, and reaction quickness will keep him playing for a long time. If he learns to handle offensive lineman better with increased strength and focus on leverage while he shoots the gap, he could be a menace of a defender.

Marshall is a low risk, high reward player here. The Eagles would be shoring up their secondary with a player who excels in run support, tackling, and his reaction to routes developing in front of him in off-man coverage. His press man coverage leaves something to be desired, and he seems to struggle to react or find passes as he sticks with receivers downfield. If anything, he’ll be a solid special teams player and could develop behind what’s a solid secondary that needed a young gun to cultivate.

Overall, Eagles fans know that Roseman knows how to build a championship-caliber team. They also know that Pederson can coach one. Fans need to “trust the process” moving forward. Understanding that this team is balanced at every position is a part of that. In the 2019 NFL Draft, Roseman can add to every part of his team while potentially finding long term starters.

If anything, these talented players can contribute to a deep postseason run, providing insurance for injuries during the season. Football needs a complete roster of 53 men because it’s the true “next man up” sport, and these rookies could easily be the next man up.