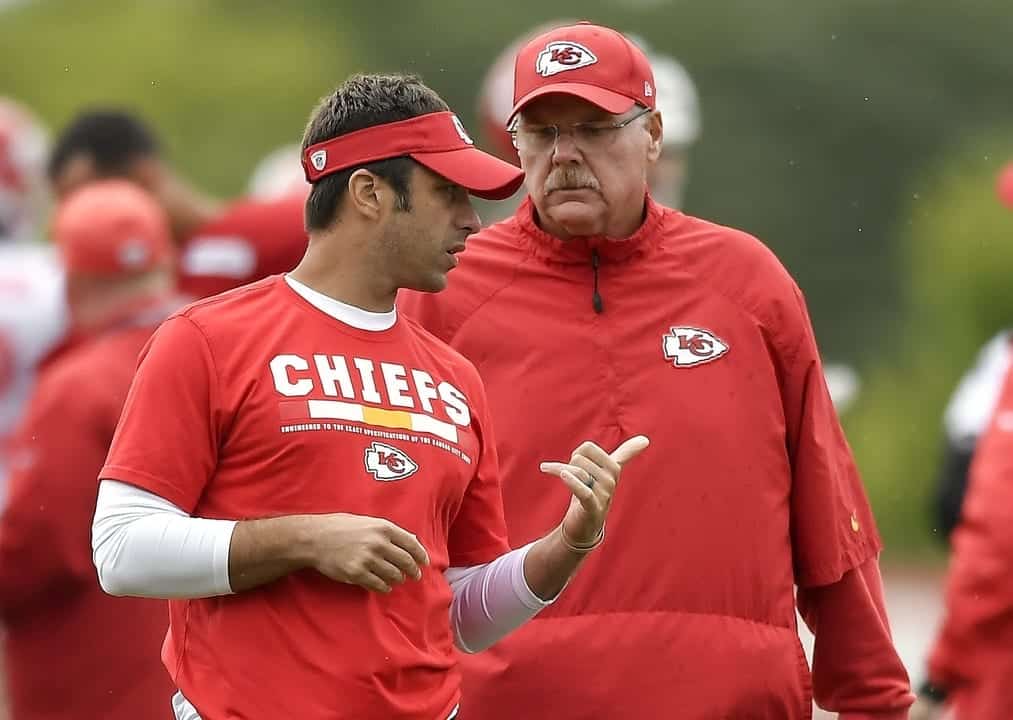 One word should be on the Kansas City Chiefs organization’s mind come the 2019 NFL Draft – defense. With the departure of defensive players Dee Ford, Justin Houston, Eric Berry, and Steven Nelson this offseason, the Chiefs have some serious holes to fill in the upcoming draft.

Kansas City Chiefs head coach Andy Reid and general manager Brett Veach have eight picks in the 2019 NFL Draft, four in the top 100, to help new defensive coordinator Steve Spagnuolo turn around one of the league’s worst defenses of 2018. I know seven rounds are the norm. But here I will focus on the first five picks, which I think can make a sudden impact on the team.

In this mock draft, I will give you the pick and a brief description of how they would help the team.

I was surprised to see Montez Sweat still available at 29 but I’m definitely not complaining. EDGE has to be the top priority for the Chiefs, who no longer have Dee Ford or Justin Houston on the roster, and Sweat can help improve this area of need.

With Kansas City switching to a 4-3 base defense, Sweat’s skill set and size fit perfectly for this role. He is a stud in run defense, which the Chiefs drastically need to improve.

In the last two seasons with Mississippi State, he compiled 22.5 sacks so he can put pressure on the quarterback. Pairing him with Chris Jones would help keep that Kansas City pass rush in the top of the league.

Cornerback is the next area of need I addressed with this mock draft. The Chiefs lost CB Steve Nelson in free agency. And even though Kansas City signed CB Bashaud Breeland, it’s still an area where they need help.

Amani Oruwariye is a player that has the physical traits and technique to fit almost any role. While most corners are great in one coverage, Oruwariye is equally good and can play everywhere. This is perfect for the Chiefs, who really only have Breeland and Kendall Fuller as legitimate starters.

Kansas City lost wide receiver Chris Conley to the Jacksonville Jaguars this offseason. While they have two receivers in Tyreek Hill and Sammy Watkins that give defenses fits, they need a third to complement that high powered offense.

Hakeem Butler is the big physical receiver that the Chiefs don’t really have. Butler is not the fastest off the line but is a beast at contested and back shoulder throws. He would give Mahomes a target for the 50/50 ball.  Once he has the ball, it is almost impossible to bring him down at first contact.

He is also strong as a blocker and would be good on those short dump-offs that Kansas City loves to run with Hill.

Drafting Butler and pairing him with tight end Travis Kelce would be a red zone nightmare for opposing defenses.

The linebacker group was an area of concern for the Chiefs in 2018 and should be addressed in this draft. They always seemed lost and afraid to tackle, and this is where Blake Cashman can help the team out.

Cashman is the type of player coach Reid loves to have in the locker room. He is a guy who was originally a walk-on and worked his way up to team captain.

He is an athletic, versatile player that can make plays from sideline to sideline, in zone and man coverage, at the line of scrimmage, or in space.

Kansas City added safety Tyrann Mathieu this offseason after releasing their former first-round pick Eric Berry. They tried to add Earl Thomas but ultimately lost out to the Baltimore Ravens and could look to add a safety in this draft.

Ugochukwu Amadi is a safety that isn’t afraid to attack the ball. He has fluid movement, excellent footwork, and knows how to bait the quarterback.

Amandi is good at identifying routes, has great play awareness and is an overall strong run defender. All of which the Chiefs could have used last season.