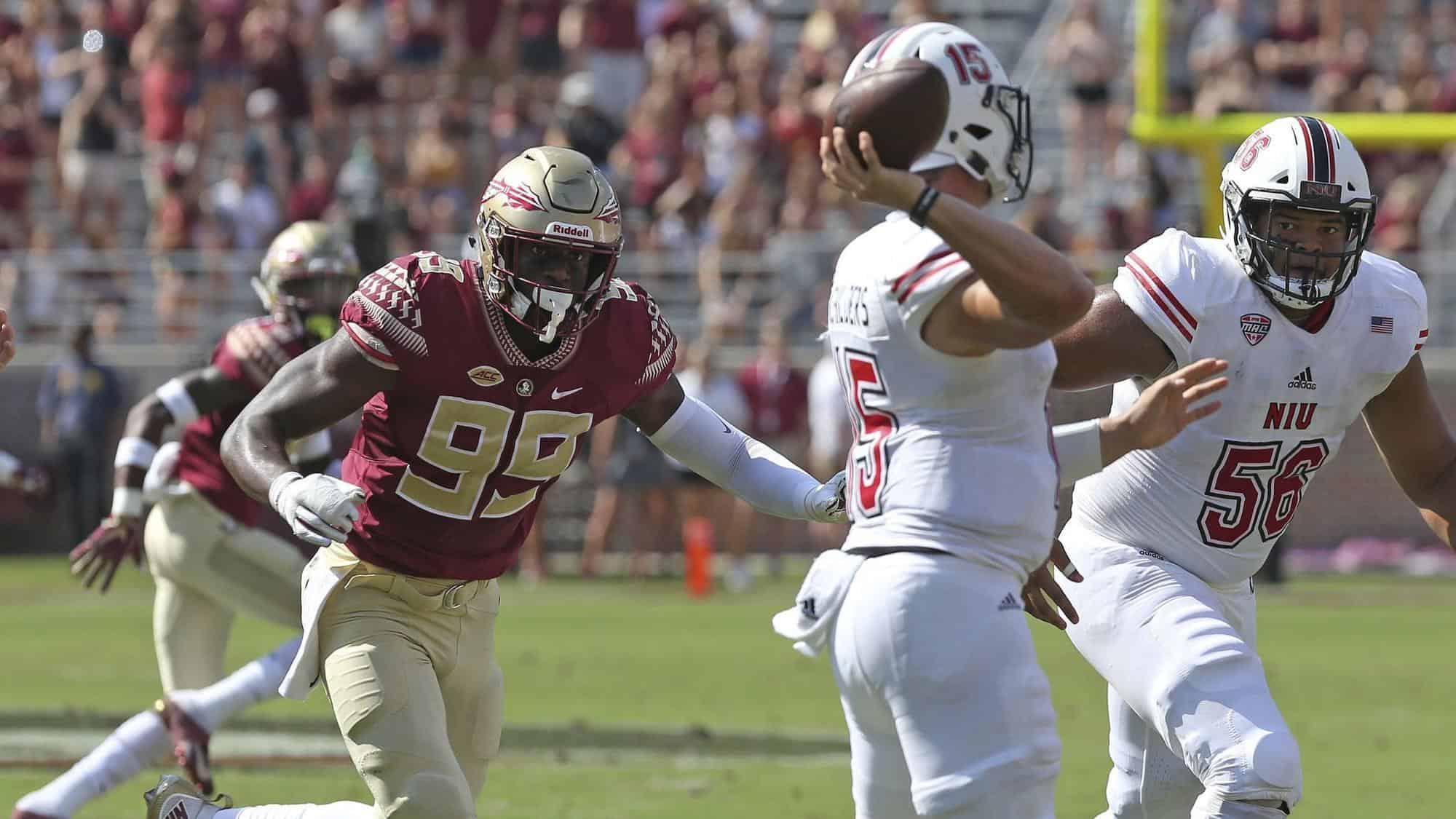 Photo Credit: sun-sentinel.com
What's in this article? Click to show
Florida State defensive end Brian Burns showed off his skills at the 2019 NFL Combine with a 97 combine score according to NFL’s Next Gen Stats. Burns proved that he is deserving of being a star in this defensive heavy 2019 NFL Draft.
Pass Rushing
Run Defense
Effort
Tackling/Pad Level
Speed
Final Verdict

Florida State defensive end Brian Burns showed off his skills at the 2019 NFL Combine with a 97 combine score according to NFL’s Next Gen Stats. Burns proved that he is deserving of being a star in this defensive heavy 2019 NFL Draft.

Brian Burns finished his junior season with 52 tackles and the second highest sack total in the ACC with 10. Burns has been justifying that he has very few weaknesses about him before the 2019 NFL Draft. After doing some film review, I found a few things that make him stand out as well as what he must improve upon to succeed for the next part of his journey.

Burns’ draft profile will go through quite a few categories including pass rushing, run defense, effort, tackling/pad level, and speed.

Burns was possibly the most dominant pass rusher in not only the ACC but the whole country. His 10 sacks led to an ACC high of 94 total sacks yards. The next closest player in the ACC was Syracuse’s Kendall Coleman with 10 sacks for a total of 78 yards.

Burns’ pass rushing was very dangerous to best offensive linemen in all Power 5 Conferences. His variety of moves and bursts of speed combined with a high IQ allowed him to create pressure on any quarterback he faced. 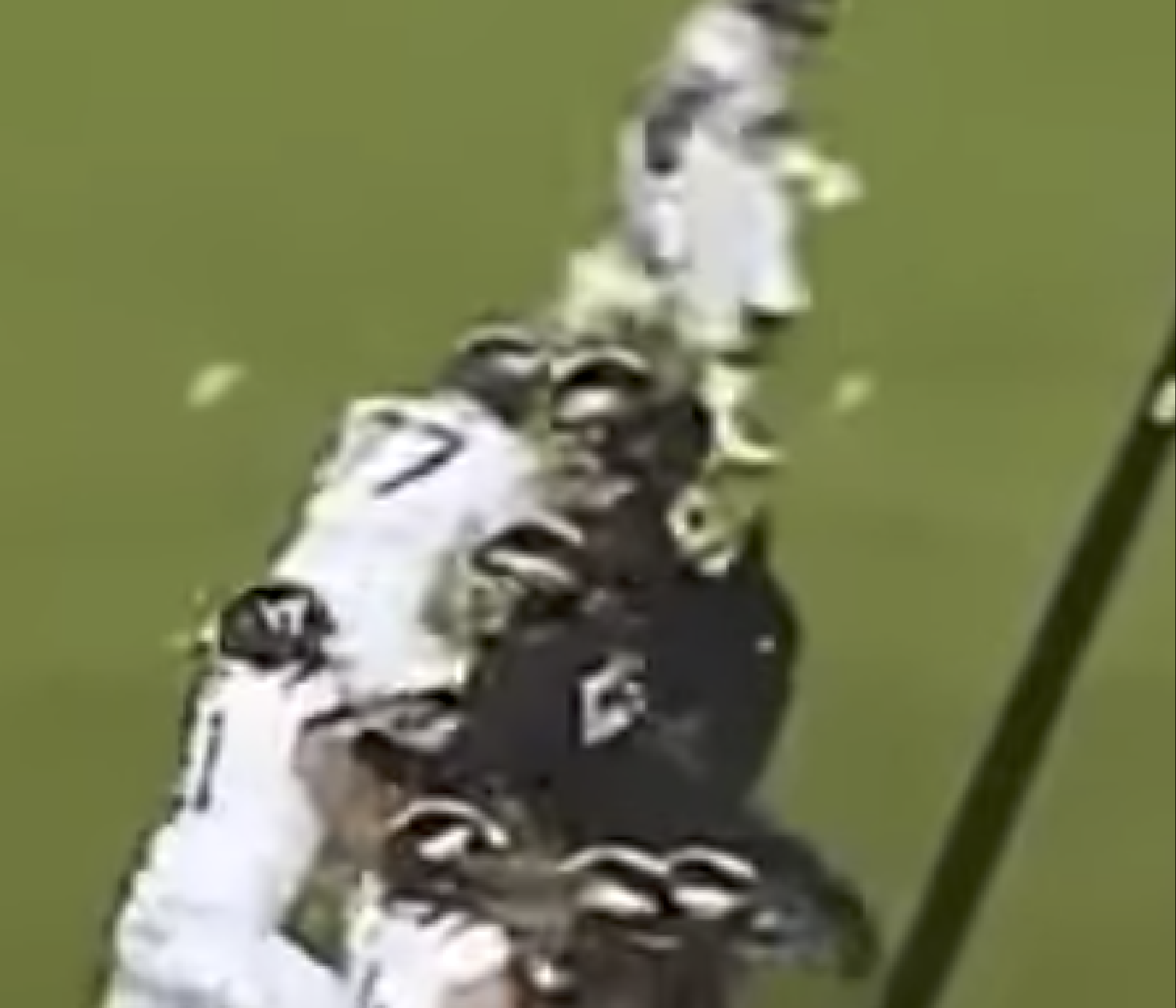 In the photo above, Burns is number 99 in black. Burns blows off the line and utilizes a swim move after taking his initial step outside. His built and size allows him to swivel his hips and cut inside quickly after using the swim move. He breaks off the block with the hit with his left hand and swims over the lineman’s head. By doing so, that causes the quarterback to throw the ball away for a waste of a down. Not only does he have a smooth swim move, but he can capitalize on any lineman’s weakness. 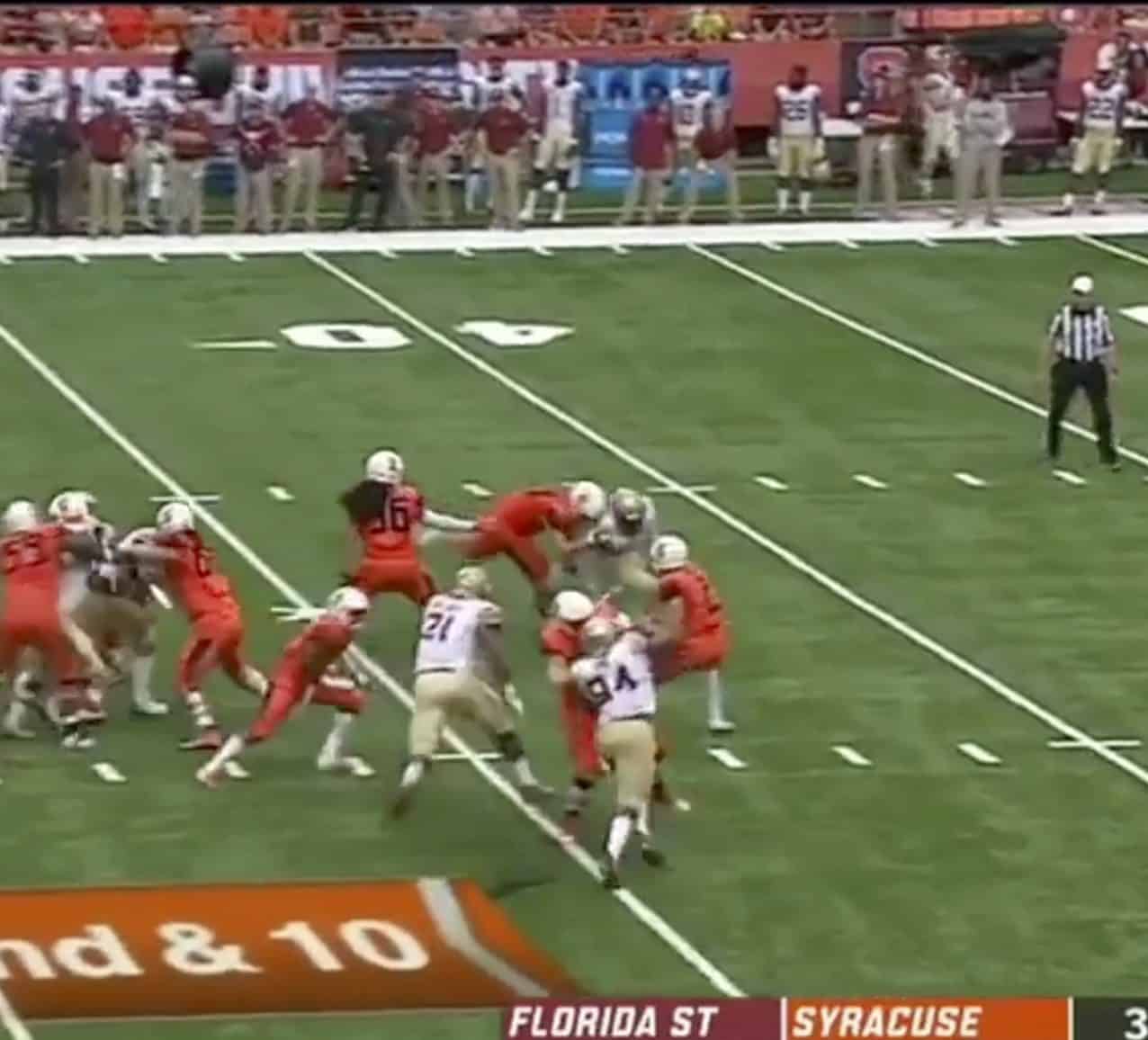 In this photo above, Burns is facing the quarterback on the right side of the pocket. In this play, Burns, with a high intelligence people overlook, realized his teammates broke through the interior and contained the blind side of the quarterback’s pocket. Burns decides to do his part by exploding to the outside tackle’s right shoulder and utilizes his rip move.

Burns initiated contact and rips through the lineman’s block leading him to secure and contain the other side of the quarterback’s pocket. That said, some other notable rushes he can use is a speed rush and possible twists and stunts once he gets in the NFL and works on his strength.

Although Burns is still a decent run stopper, this is one of his weaknesses that must be improved upon soon. Burns, with a slim 6-foot 5-inch 250 pound build, has great agility to slide past lead blockers and offensive linemen blocking on runs. Burns exemplifies this by having the fifth fastest 3-cone drill for edge rushers at the NFL Combine. However, the size can come back to hurt him on the run blocking too.

The lack of weight will not have him thrown around. That said, he will struggle in the trenches holding his own or jamming the outside holes in outside zone runs, outside power runs, or sweeps.

In the photo above, Burns is located on the 9 of the 2nd and 9 design. Burns gets jammed after trying to speed rush outside. Burns is not the strongest edge rusher and will struggle to outmuscle any lineman in the NFL. This can cause him to become a bit of a liability in the run game if he cannot shed run blocks.

Another weakness noted is his IQ when he is not in the play. If he is required to be in the play, he knows what each of his teammates is doing as well as what he needs to do to get the best outcome. However, Burns struggles to find a way to help on weak sides. For example, in this photo, he can step up and shut down the cutback lanes and contain the running back. However, he has not picked up on that yet. This trait will need to develop through time and experience. 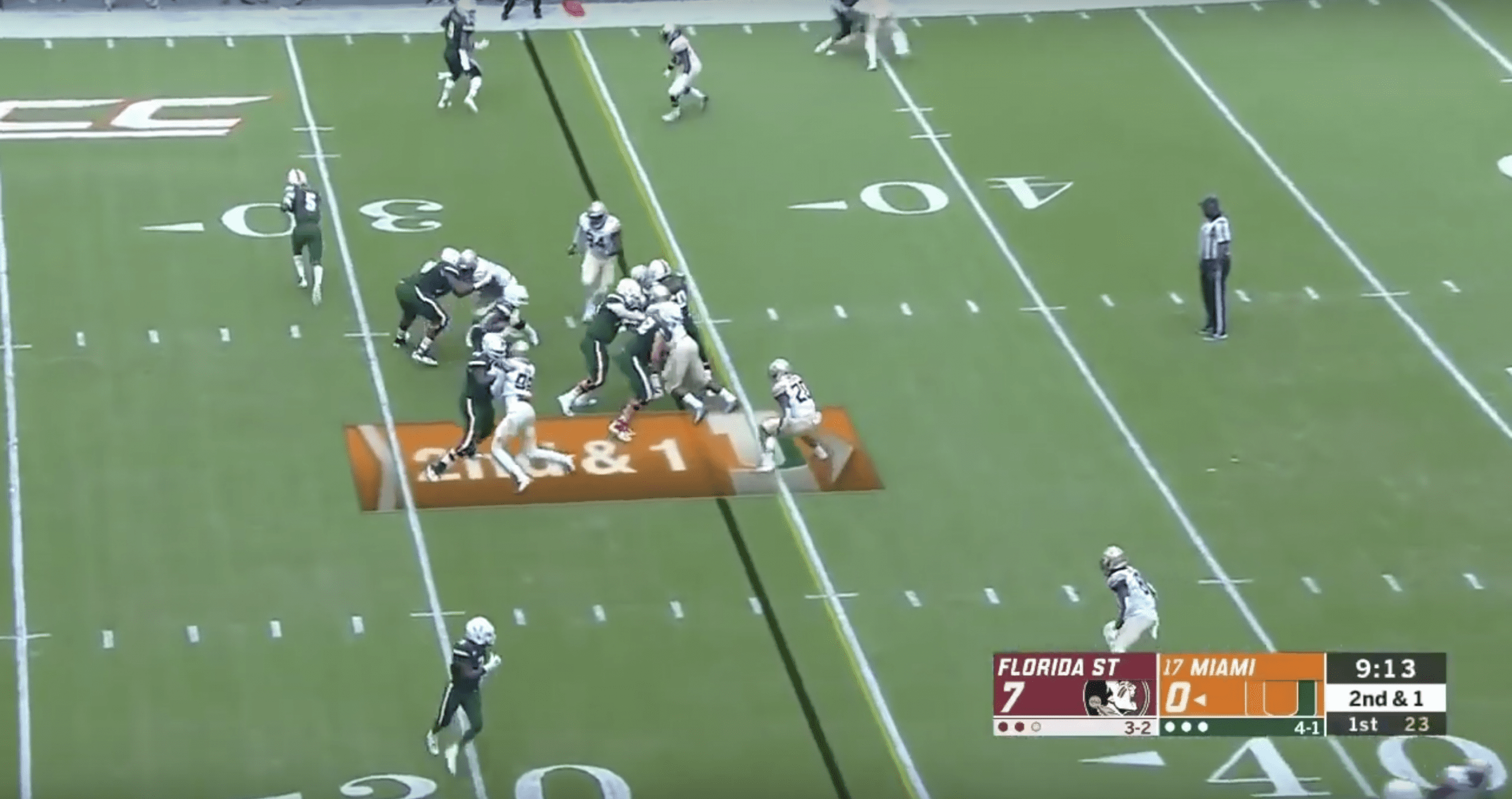 In this photo, Burns captures all of scouts eyes with one of the best qualities a prospect can have, hustle and effort.

Burns was initially blocked as the running back is in the middle of the backfield. After a second, the running back picks a lane on the left side of the line and bursts through. Instead of Burns stopping since he is on the back side, Burns finally sheds the block. He pursues the back for almost 10 yards and uses his 33 7/8 inches long, to wrap up the back from behind and finish the play. Most defensive linemen and edge rushers do not have that trait. Burns, however, has this unique skill that keeps running backs afraid of where Burns is at all times.

Burns’ proficiency in tackling goes side-by-side with his effort. Burns’ long arms and quick feet allow him to catch up to some of the fastest players. Burns will also keep a near perfect pad level when he wraps up and tackles as well. 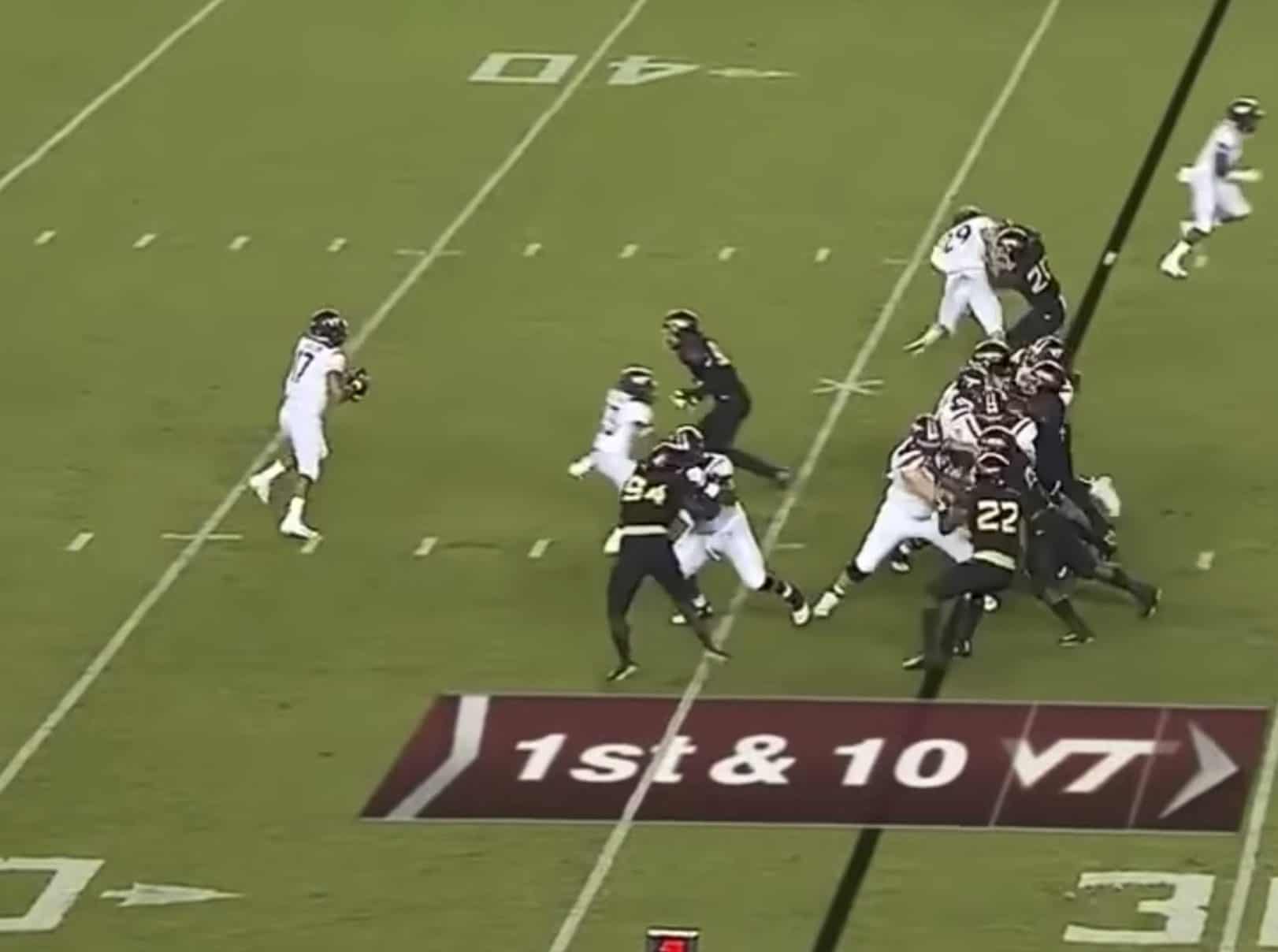 In this photo, Burns has a clear shot on the quarterback. Burns does not go head hunting, but instead goes to his basics and follows the basic rules of tackling. Burns breaks down and begins to slow down and chop his feet. He lowers his pad level and brings his hands to his side. Burns then locks up his power in his lower legs and explodes through the quarterback’s chest plate with his head on the outside.

Burns length and speed will make him able to catch up to new wave up dual-threat quarterbacks like Deshaun Watson, Russell Wilson, and Lamar Jackson.

Out of all his strengths, speed is Burns best quality. Burns had the ninth fastest 40-yard dash at the NFL Combine with a time of 4.53 seconds. As stated above, Burns can stick with mobile quarterbacks. 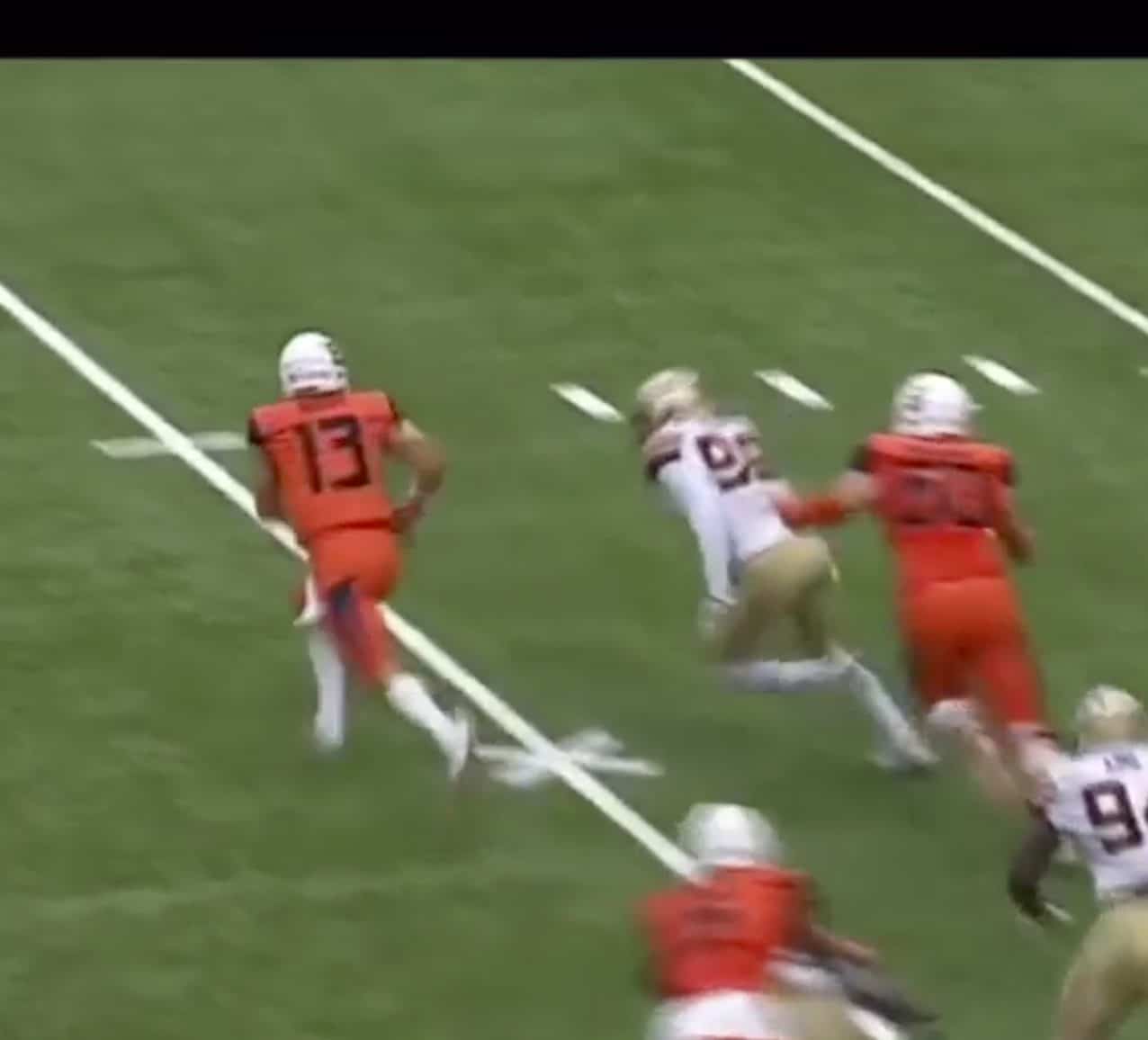 In this photo above, Burns is chasing down the quarterback scrambling. Burns’ long strides and mobility allows him to remove the quarterback’s possibility from having any chance of making a play.

Lastly, in the photo above, Burns is on the 1st & 10 logo facing off against the right tackle. Right off the snap, Burns uses his speed rush, and soon enough, the tackle’s hips open as he flies by the tackle. Burns creates a containment and begins to pressure the quarterback in just a few seconds.

Brian Burns has many upsides to him in his draft profile. In addition, Burns has plenty of potential and is already a possible top three player based off of his true talent for the 2019 NFL Draft. Burns will be a valuable addition for any team and specifically the Detroit Lions, who would fill a big need on defense according to Bleacher Report. Burns does not have many weaknesses, but the few that there are can be fixed easily.