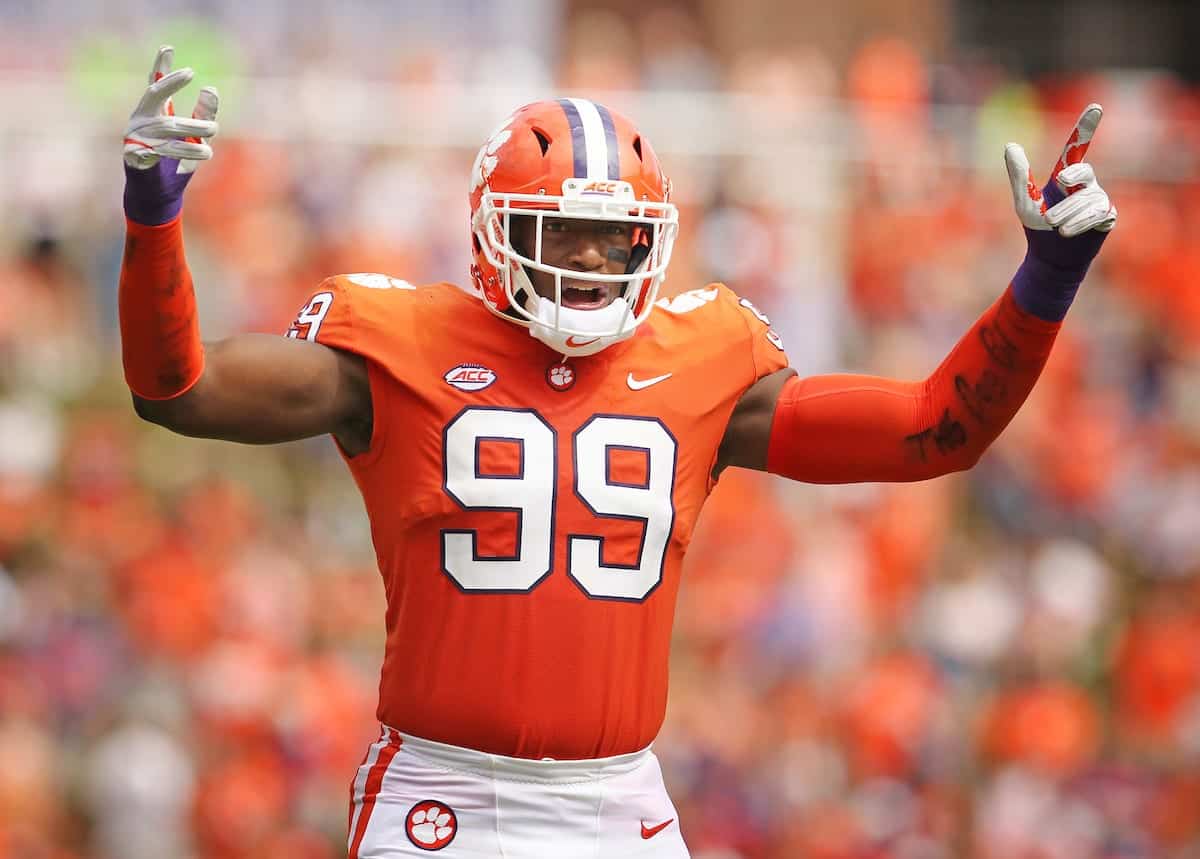 The strengths of the 2019 NFL Draft fits perfectly for just what the Atlanta Falcons need to return to playoff form. They need a re-tooled defense and a return of offensive philosophy.

The 2019 NFL Free Agency period has gotten underway, and a few moves have been made to set up the Atlanta Falcons to have more flexibility in the 2019 NFL Draft. The additions on the offensive line addressed a major concern heading into the 2019 season. Adding two guards in Jamon Brown and James Carpenter, essentially added two new starters for the Falcons.

Atlanta also brought back former offensive coordinator Dirk Koetter. Kotter was a part of some of Matt Ryan‘s better years and is known for a more aerial attack on offense. With weapons on the outside such as Julio Jones, Calvin Ridley, Mohammed Sanu, and Austin Hooper, the Falcons have a nice core and could have one of the better offenses in the league once again.

On the defensive front, the Falcons need to add more talent. Luckily for Atlanta, that is the strength of the draft. This class may be one of the deepest defensive drafts in quite some time, especially on the defensive line, where the Falcons should spend most of their attention. With nine selections, the Falcons have the ammunition to re-tool and challenge for the NFC South crown once again.

In my first mock, I am going to keep all the current selections the same and not include any trades. With the way the Scouting Combine concluded and certain players rising to the top of the draft, specifically at QB, this may be the best case scenario for the Falcons. The selections were made using the On the Clock App on Fanspeak.com.

The Falcons have spent some first-round picks on the defensive line. That shouldn’t stop them from selecting the top available defensive end at pick 14 however. Vic Beasley and Tak Mckinley have yet to show that they are the answer on the edge. This draft’s deepest position is edge. It would be wise for Atlanta to take one of the top pass-rushing defensive ends available.

Ferrell was arguably the most dominant Clemson defensive lineman during his four years. On a line that featured four highly regarded prospects, he shined. At 6-foot 4 and 265 pounds, Ferrell is a complete all-around defensive end, unlike the “tweener” type edge rushers the Falcons have drafted recently. Ferrell has the size to play the run, set the edge, and be an every-down player. He also has the speed to take down the quarterback. In his career at Clemson, Ferrell registered 27 sacks and a staggering 50.5 tackles for loss.

A player of Ferrell’s caliber can set the tone for a defense in need of leadership. A selection of Ferrell would bring production and a future captain. He is a leader of 2 National Championship teams and some of the best defenses in college football. Ferrell would also allow Beasley and Mckinley to become more productive by allowing them to come in fresh and rotate to rush the passer exclusively.

Dexter Lawrence is one of the most physically gifted players in the 2019 NFL Draft. A former top recruit out of High School, Lawrence is what you want out of a nose tackle. It doesn’t get any better than a 6-foot 4 345 pound defensive tackle that runs a 5.0 flat forty-yard dash.

The Falcons lost Dontari Poe last year, who was a former first-round pick from the Chiefs. Poe was similar in size and athleticism, but I will argue Lawrence is by far superior talent than Poe was coming out of college. On a defensive line that featured many highly touted prospects, Lawrence was the most gifted. The production wasn’t exactly what everyone was looking for at Clemson. His ceiling, however, is through the roof. A year ago many were speaking about Lawrence as a potential top 5 pick. A year later Lawrence, in the second-round, is a steal that will reward the general manager that drafts him in my opinion.

Arguably the most critical need on the Falcons is at right tackle. Atlanta released the struggling Ryan Schraeder this offseason, and need a more significant talent to take over. Enter Michael Deiter who comes from the long line of Wisconsin offensive lineman. Deiter set a Wisconsin record with 54 starts during his tenure, despite the illustrious lineman that have come through the Wisconsin Campus.

6-foot 5 and 310 pounds, Deiter has the size you look for in the NFL. Most have labeled him as an interior offensive lineman at the next level, but I believe he could become an adequate right tackle. The flexibility Deiter has to play multiple positions also adds to his value and is highly sought after. Deiter would instantly become one of the most talented linemen for Atlanta. Matt Ryan took over 40 sacks last year, and the offensive line has been a focus this offseason.

One of my favorite running backs in the entire draft is Trayveon Williams. He could wind up being one of those players where you look back and say, “Who is the next Trayveon Williams in the draft”. At 5-foot 8, 206 pounds with a 4.51 forty-yard dash, there is a lot to like about Williams. Outside of the measurables, Williams had the production. He finished his junior year with 2,038 yards from scrimmage and 19 total touchdowns.

The Falcons lost Tevin Coleman in free agency who was their most consistent running back. Devonta Freeman has been battling injuries and is still the 4th highest paid running back in the league, a contract that has not been worth it. Williams could be a nice addition and replacement for Coleman, but also a potential starter if they decide to move on from Freeman’s contract.

Atlanta needs to address the back-up quarterback spot behind Matt Ryan in the draft. Not only would it be great to groom someone for the future to replace Ryan, but currently if anything happened to Ryan, the Falcons would be in a horrible situation with Kurt Benkert leading the charge.

Stidham has all the tools to be a successful quarterback in the NFL. With the right coaching and guidance from Dirk Koetter, Stidham can become at the least one of the better back up quarterbacks in the league. Measuring at 6-foot 2 and 220 pounds, Stidham has the prototypical size for the position and ran a 4.8 forty-yard dash at the combine.

Playing at Auburn and the mighty SEC, Stidham is no stranger to the spotlight and pressure of big games. A starter as a true-freshman, talent has never been a question for Stidham. Many evaluators believe he will have more success at the NFL level than he did in college, and being in a quarterback room with Matt Ryan and Dirk Koetter will go a long way to reaching his potential.

Kendall Sheffield is an ideal nickel cornerback who can come in and compete for a starting job. He is another talented cornerback from a long line of successful cornerbacks from Ohio State. Sheffield has blazing speed at 6-foot and 190 pounds. Though he may not have the “lockdown” traits that past Ohio State cornerbacks may have had before him, Sheffield would be suited perfectly inside at nickel to showcase his quickness and speed to keep up with slot receivers.

Unfortunately, Sheffield tore his pectoral muscle during the bench press at the combine. He was expected to test very well like all the other Ohio State participants that did just that. That could be the Falcons gain though, as Sheffield most likely would have been a day two pick if he had the opportunity to showcase his speed and athleticism. It is believed that Sheffield may have been one of the fastest at the combine, especially with his track background and previous records at Ohio State.

The Falcons added a couple of veterans in free agency on the interior offensive line. But adding a young piece to groom from the draft would be ideal at either guard spot. Michael Jordan possesses excellent size at 6-foot 6 and 312 pounds. Jordan left Ohio State a year too early in most evaluators opinions and could wind up as a steal in this year’s draft.

Guard would be the most natural spot for Jordan after playing both center and guard in college. Behind newly signed veterans James Carpenter and Jamon Brown, Jordan would be a great back-up option for both and a potential future starter.

Offensive coordinator Dirk Koetter gets his new version of Adam Humphries in Atlanta with Hunter Renfrow. Renfrow may end up going a bit higher by the time the draft rolls around, as one of the most reliable pass catchers in the entire draft. His physical limitations (5-foot 10, 180 pounds) may keep him as a late-round pick, however, and that will be great news for whoever ends up drafting him.

Koetter knows Humphries very well from coaching him in Tampa Bay, and Renfrow is similar. Humphries is a bit more physical and has a larger body (6-foot, 200 pounds), but Renfrow is just as quick and sure-handed. Koetter loved getting the ball out quickly to Humphries and lined him up all over the formation, something Renfrow did very well for Clemson.

One of my draft sleepers that you can read more about is Cardell Rawlings. Rawlings has the size and speed to be a great chess piece on defense. A 6-foot 2 and 240-pound defensive end in college, Rawlings would be a more natural outside linebacker in the NFL. He ran in the 4.5 range in the forty-yard dash. At the Division II level, Rawlings dominated and was named All-American and SAC Defensive Player of the Year after his school-record 18 sacks and 23 tackles for loss. No risk pick here with untapped potential and ceiling.