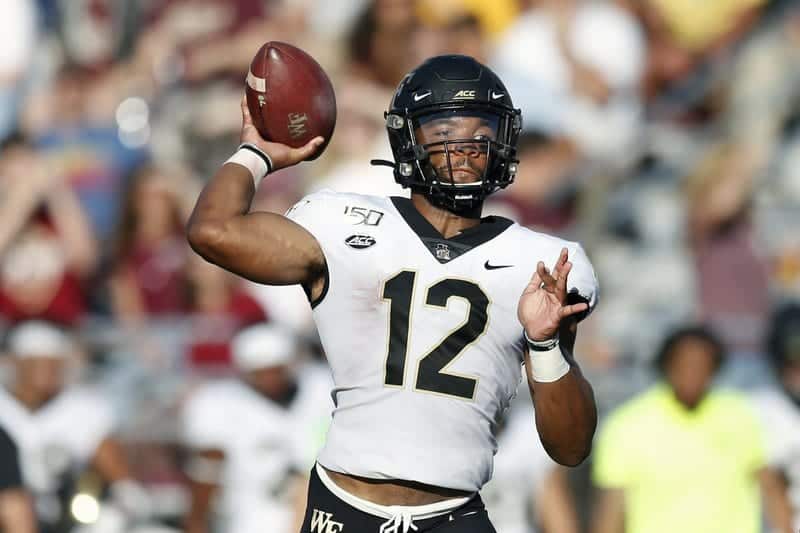 The first half of Friday’s college football bowl schedule is packed with 2020 NFL Draft prospects. The Military Bowl, featuring North Carolina and Temple kicks off today’s action at noon ET. Shortly after that, the Pinstripe Bowl featuring Michigan State and Wake Forest starts at 3:20 pm ET, followed by the Texas Bowl between Oklahoma State and Texas A&M at 6:45 pm ET.

The North Carolina Tar Heels come into this game with a few players that will catch the attention of NFL scouts. The main event is junior linebacker Chazz Surratt, but it is unlikely that he will declare for the draft. Surratt is a former quarterback, which is evident by his elite athleticism. He has had a marvelous 2019 campaign and would be a day two selection should he decide to make the jump.

Safety Myles Dorn and defensive linemen Jason Strowbridge are solid prospects with bright NFL futures. Dorn is the heart and soul of the Tar Heel defense. He is a sound tackler who is as reliable as they come. Strowbridge will be in Mobile, Alabama, for the Senior Bowl. He offers positional versatility as he can play both inside and outside along the defensive line.

Offensive tackle Charlie Heck is another player that has a chance to play on Sundays. He is a mammoth of a man, is as strong as an ox, and is a smart football player, making him an ideal swing tackle at the next level.

The Temple Owls boast a few day two and day three draft prospects with NFL futures on both sides of the football. Quarterback Anthony Russo is a solid option for a team to look at on day three, but his ceiling is likely limited to a backup role. The Owls’ best player in today’s matchup is center Matt Hennessy. Hennessy is tough and fundamentally sound and can be a starter for an NFL team early in his career, whenever he may declare.

On defense, EDGE Quincy Roche leads the American Conference in sacks and tackles for loss using his explosiveness off the line of scrimmage. A huge game against talented OT Charlie Heck would boost his stock. CB Harrison Hand has been relatively solid all season long, and can be a good mid-day two option should he declare.

The Michigan State Spartans have some intriguing players on defense for this upcoming bowl game. Redshirt senior Kenny Willekes missed last year’s bowl game and is looking to capitalize on his final showing before he heads off to the NFL. I’m a fan of his relentless motor and ability as a pass rusher, and I’m higher on him than most with a second-round grade. Defensive tackle Raequan Williams is more flash than consistent at this point, but he’s powerful and athletic, making him a great day three developmental pick.

Quarterback Brian Lewerke has physical tools, but he’s been borderline unreliable, and his last two seasons have been nothing short of disastrous for his NFL stock. Teams will take their shot on him late in the draft.

The Wake Forest Demon Deacons are coming off of an excellent 2019 season, and they have a few players that NFL scouts will be watching at the Pinstripe Bowl. First, the bad news, as defensive end Carlos Basham Jr. and wide receiver Sage Surratt both announced their intentions to return to school for the 2020 season. Basham’s draft stock was soaring, and he was in the conversation to be a 2nd-round selection. While pass rusher Basham will return to Winston-Salem for the 2020 season, there are still two draft prospects from Wake Forest worth watching.

Quarterback Jamie Newman will likely be a day-two pick if he declares for the 2020 draft. Newman’s name is hot in the scouting community as he has the ideal size for the QB position, and he was a surprise playmaker for the Deacons in 2019. According to Tony Pauline, Newman is still undecided and is considering the draft. He will go through the information gathering process, and the overall belief is that Newman could vault into the first round if he returns to Wake and improves upon what was a good 2019 season.

Cornerback Essang Bassey has been a favorite in the scouting community for quite some time. He is a bit undersized, which will make him more of a slot-cornerback in the NFL. Bassey’s game reminds me of Baltimore Ravens’ Tavon Young, who has blossomed into one of the best slot-cornerbacks in all of football.

Unfortunately, we will not get the opportunity to see senior linebacker Justin Strnad, as he suffered a season-ending injury earlier in the season. Strnad has an NFL future as a reserve linebacker and a core special teamer.

The Oklahoma State Cowboys come into this game with an enticing quartet of players that have the potential to become substantial contributors at the next level. Cornerback A.J. Green leads the talented group. Green, a lengthy cover man with an impressive wingspan, didn’t get his hands on the ball as much as he had in previous seasons — but a strong showing at the Reese’s Senior Bowl could elevate him into the second-round conversation.

Chuba Hubbard is one of my favorite running backs in this draft class. While he doesn’t possess the coveted speed that teams look for at the position, he is a silky smooth runner with tremendous vision in the open field. Given the running back depth in this draft, a talented player like Hubbard could very well be had in the third round.

Tylan Wallace is an interesting player — he has yet to declare for the NFL Draft and is coming off of an October ACL injury. The six-foot, 185-pound pass-catcher was on his way to achieving his second 1,000-yard campaign in as many seasons before the ill-timed injury.

Jordan McCray has an intriguing profile but a limited collegiate resume. He’ll have a week at the East-West Shrine Bowl to turn some heads, but he is likely destined to be a priority free agent.

The Texas A&M Aggies feature prominent playmakers on both sides of the ball. On offense, they feature a trio of talented and diverse wide receivers. Quartney Davis is a talented route-runner who wins after the catch, while Kendrick Rogers excels in contested catch and 50/50 ball situations with his excellent length and ability to attack the ball. Jhamon Ausbon might be the most dynamic of all three but has had past injuries that will raise durability questions.

On defense, defensive tackle Justin Madubuike is the key for the Aggies. However, he’s sitting out of the bowl game, as he has already declared early for the 2020 NFL Draft. He is the best of the bunch, so it’s a critical loss for the Aggies who face a very dynamic offense. Madubuike offers a ton of physical upside as an interior player at the next level with some incredible power. I’d expect him to hear his name called Day two of the 2020 NFL Draft.