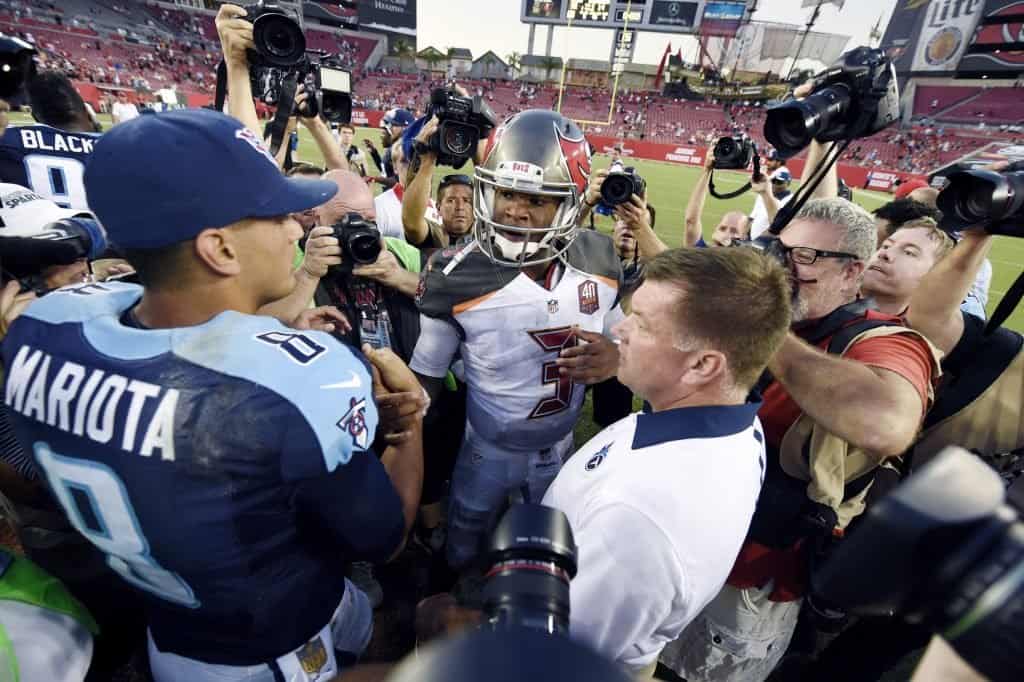 The 2015 NFL Draft made history. It was the first time that two Heisman Trophy winners had been selected first and second overall. Six years later, and with the benefit of hindsight, would Jameis Winston and Marcus Mariota repeat that historic feat? Let’s find out as the Tampa Bay Buccaneers are on the 2015 NFL Draft redraft clock!

Six years after drafting Jameis Winston, the Tampa Bay Buccaneers are Super Bowl champions, and everybody lived happily ever after. The End.

Ok, so that’s not quite how the story goes. Despite impressing in spots, Winston could never quite pull it all together for the Bucs. He ended his career there with the famous 30-interception season in 2019. Looking back at 2015, however, what else could Tampa Bay have done? They desperately needed a quarterback and Winston was the clear-cut QB1. Therefore, nothing changes in this 2015 NFL Draft redraft.

Although Marcus Mariota demonstrated flashes of brilliance early on, he would ultimately be displaced by Ryan Tannehill. Indeed the quarterback position was a priority, but the Tennessee Titans had Charlie Whitehurst and Zach Mettenberger on their roster. As such, the need was possibly not as pressing as that of Tampa Bay.

So, here we give the big-armed Mettenberger a genuine receiving threat in the form of Alabama wide receiver Amari Cooper. Cooper has just one season where he has dipped under 1,000 receiving yards. The original fourth overall pick of the “Oakland” Raiders would have been a much more valuable addition to the Titans.

In desperate need of a productive pass rusher, the Jacksonville Jaguars swooped for Dante Fowler Jr. with the third overall pick. Unfortunately, he missed his entire rookie season for the Jaguars and was out the door three and a half years later. In this 2015 NFL Draft redraft, they instead select Michigan defensive end Frank Clark.

In his six years with the Seattle Seahawks and Kansas City Chiefs, Clark has become one of the most productive defensive ends out of the 2015 class. He would have also been a more natural defensive end in the Jaguars 4-3 defense than Fowler.

With original selection Amari Cooper off the board, the Raiders take a dramatically different course here. Although the temptation to give them Stefon Diggs was huge, instead, we address a need that they are still trying to address today. Defensive end was seen as the second biggest need at the time. Therefore, they select Danielle Hunter out of LSU.

Originally a third-round pick, Hunter has been an extremely productive member of the Minnesota Vikings. He has amassed 54.5 sacks and 6 forced fumbles in his career. Hunter and Mack would have wreaked havoc as the bookends of their front four.

The Washington Football Team holds station at No. 5 with Brandon Scherff. Easily one of the best offensive linemen from this class, Scherff was a first-team All-Pro this last year. Washington could find out just how valuable he is with Scherff currently set to hit free agency.

Even though Leonard Williams was traded away by the New York Jets, the temptation was to stick with him here. He did earn a spot on the 2015 PFWA All-Rookie Team for “Gang Green” after all. However, they instead make a move for a productive outside linebacker that would prove a better fit in their 3-4 defensive scheme.

Although he had a steady start to his career as a fourth-round pick of the Baltimore Ravens, Za’Darius Smith has been a force for the Green Bay Packers over the last two seasons. The Jets are banking on the production that led to second-team All-Pro honors for Smith in 2020.

Original pick Kevin White had more receiving yards in his junior season for West Virginia than his entire six-year NFL career. Meanwhile, Stefon Diggs is coming off his third consecutive 1,000+ yard season. Additionally, he received first-team All-Pro honors in 2020 after a career year for the Buffalo Bills. The former Maryland pass catcher was originally a fifth-round pick. Here he lands much, much higher.

Vic Beasley had an All-Pro season in 2016. Unfortunately, it was the highlight of an otherwise average stint with the Atlanta Falcons. Instead, they take the best defensive prospect available in the form of Leonard Williams. Originally anticipated to be the second overall pick, Williams would present superb value for the Falcons at No. 8. He would also have fit better as a traditional defensive end in Atlanta’s 4-3 system than he did for the New York Jets.

Offensive line was the biggest area of need coming into the 2015 NFL Draft. Disappointingly for the New York Giants, they addressed it with Ereck Flowers. He may have gone on to be a decent guard for the Miami Dolphins. However, there is no other word to describe his time in New York than “bust.”

Meanwhile, Andrus Peat has become a fixture on the New Orleans Saints’ offensive line. Originally drafted as an offensive tackle, the majority of his 78 appearances have been at guard. Either as a tackle or a guard, he represents a significant upgrade for the Giants in this 2015 NFL Draft redraft.

Another team that had a glaring need on the offensive line was the Rams. However, they upgraded their offense with the selection of running back Todd Gurley. Although he was the heartbeat of their offense, his play declined towards the end of his stint there. In 2020, he had the lowest rushing yards of his career for the Atlanta Falcons.

Offensive line was considered a big need for the Rams in 2015. They drafted Rob Havenstein in Round 2, but here they upgrade the interior with Hobart guard Ali Marpet. The original second-round pick of the Tampa Bay Buccaneers rose to prominence after an impressive performance at the 2015 Senior Bowl. He would go on to be a pivotal part of the Bucs’ Super Bowl-winning team.

The Minnesota Vikings hoped to address their cornerback need with Michigan State’s Trae Waynes. He didn’t exactly work out and is now with the Cincinnati Bengals.

In this 2015 NFL Draft redraft, they instead swoop for Washington’s Marcus Peters. “Upgrade” is probably an understatement here. Peters was the Defensive Rookie of the Year in 2015, jointly led the NFL in interceptions as a rookie, and has been a first-team All-Pro for two different teams.

Who can forget the scenes of Danny Shelton embracing Roger Goodell on stage after being selected by the Browns with the 12th overall pick of the 2015 NFL Draft? Browns fans probably would rather forget them. So, in this 2015 NFL Draft redraft, they select Grady Jarrett instead.

The dominating defensive tackle was a pivotal part of the Atlanta Falcons’ run to Super Bowl LI. Additionally, he left his mark on Tom Brady during the game. A former fifth-round selection, Jarrett was a second-team All-Pro in 2019.

With offensive tackle Andrus Peat already off the board in this 2015 NFL Draft redraft, the New Orleans Saints are forced to rethink their strategy. Outside linebacker and wide receiver were considered needs. Instead, they address a less obvious need in the secondary.

Byron Jones is often overlooked due to a lack of interception numbers. However, the former 27th overall pick has been an integral part of the Dallas Cowboys’ and Miami Dolphins’ defenses that he’s played on. A 2018 second-team All-Pro, the Dolphins made him the highest-paid cornerback in the NFL just a year ago.

Although DeVante Parker had a career year in 2019 with his first 1,000+ yard receiving season, the Miami Dolphins probably expected a little more return on their investment from the 14th overall pick.

Although they are incredibly different receivers, Tyler Lockett has proven to be a dangerous playmaker since being drafted in the third round by the Seattle Seahawks. Lockett was named to All-Pro teams in each of his first three seasons in the NFL.

Although original pick Arik Armstead secured a contract extension just last year, the San Francisco 49ers instead use the 15th overall pick in this 2015 NFL Draft redraft to secure a playmaker at inside linebacker. Eric Kendricks impressed immediately for the Minnesota Vikings, earning All-Rookie Team honors in 2015. He was also named first-team All-Pro in 2019.

Kendricks has been a playmaking force and would have slotted in alongside NaVorro Bowman to make a formidable linebacker duo.

The Houston Texans picked up the fifth-year option on original pick Kevin Johnson but released him the following year. Cornerback wasn’t considered a major need for the Texans heading into the draft, but inside linebacker was. They already had Whitney Mercilus and Jadeveon Clowney playing outside, so here they add Kwon Alexander to play alongside Brian Cushing on the inside.

Alexander landed on the All-Rookie Team in 2015 and was a Pro Bowler in 2017. Injuries may have hampered his career, but he still represents an upgrade on Johnson.