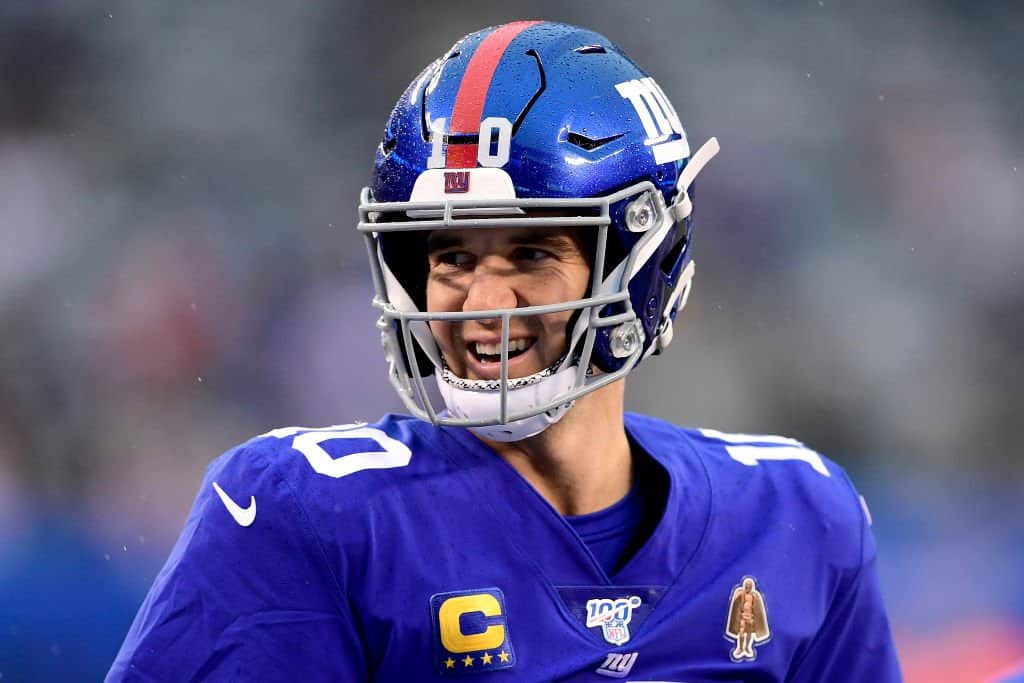 EAST RUTHERFORD, NEW JERSEY - DECEMBER 29: Eli Manning #10 of the New York Giants warms up prior to the game against the Philadelphia Eagles at MetLife Stadium on December 29, 2019 in East Rutherford, New Jersey. (Photo by Steven Ryan/Getty Images)

The 2004 NFL Draft will go down in history as one of the best quarterback classes of all-time. Furthermore, it was highly successful all-round with multiple All-Pros, Pro Bowlers, and Super Bowl-winning players. However, things can always be better with hindsight. With that said, let’s investigate what a 2004 NFL Draft redraft would look like.

The 2004 NFL Draft will be best remembered for the dramatic events that unfolded with the No. 1 pick. The then-San Diego Chargers selected Eli Manning despite the Ole Miss quarterback not wanting to play for the Chargers. Three picks later, the New York Giants selected Philip Rivers despite having interest in Miami of Ohio quarterback Ben Roethlisberger.

One hour later, and the Chargers and the Giants essentially swapped Rivers for Manning. It is, of course, a little more complicated than that. However, both teams ended up with a quarterback that wanted to play for them.

Despite Rivers being the only one of the three 2004 first-round quarterbacks not to win a Super Bowl, I don’t believe the Chargers would go back and change a thing. Until his trade to the Indianapolis Colts last year, the Chargers and Rivers were synonymous with one another. It wouldn’t surprise me to see Rivers sign a one-day deal to retire with the Chargers.

Arguments can be made for all three as the best of the bunch. However, Rivers has the best touchdown percentage of the three while having the lowest interception percentage.

Throughout the draft process, the then-Oakland Raiders were continually linked to Larry Fitzgerald with the second overall pick. Despite this, they selected Iowa offensive tackle Robert Gallery. He was widely regarded as the best offensive tackle prospect ever to enter the draft. It turns out he was a liability at tackle, but he forged an adequate career at guard.

The Raiders were also a contender to draft a first-round quarterback. The two quarterbacks they rostered in the 2004 season were both over 30, and there was a consideration in this 2004 NFL Draft redraft to send Roethlisberger or even Manning to Oakland.

Instead, however, they select Sean Taylor. The Miami safety was one of the most violent players imaginable on the football field. Whether you think that the player fits the need or not is irrelevant. Taylor embodied the spirit of being a Raider — I imagine Al Davis would have loved to see the dominant defender in black and silver.

No explanation necessary here. There’s a reason that Larry Fitzgerald is nicknamed “Larry Legend.” The Arizona Cardinals couldn’t have wished for a better return on their investment. He has been a first-team All-Pro, led the NFL in receiving touchdowns twice, and, in testament to his impact off the field, was the 2016 Walter Payton NFL Man of the Year.

Currently, he is set to still be playing at the start of the 2021 NFL season.

15 years and two Super Bowl wins later, the New York Giants will feel like they got the better deal out of the Rivers-for-Manning draft-day trade. Manning was the Super Bowl MVP in those two wins and also holds the record for most passing yards in an NFL postseason.

Much like Rivers in San Diego/Los Angeles, Manning very much became the face of the franchise for the Giants. A testament to his standing with the teams he’s played on, both Ole Miss and the New York Giants have retired his No. 10 jersey.

I struggle to believe that the Washington Football Team would change their selection here. However, in this 2004 NFL Draft redraft, their hand is forced. Sean Taylor is already off the board, so Washington has to adjust.

Later on in the 2004 NFL Draft, they would select Utah State tight end Chris Cooley, who would have an impressive NFL career of his own (more on that later). Addressing the position was clearly something that Washington felt it needed to do.

Here, they select Kellen Winslow II, the tight end out of Miami. They gazump the Cleveland Browns, who used the No. 6 pick on Winslow in this draft. After a torrid start to his career in Cleveland, Winslow became the highest-paid tight end in NFL history (at the time) with the Tampa Bay Buccaneers. He went on to rack up over 5,000 receiving yards and secure 25 touchdowns.

For the past 15 or so years, the Cleveland Browns have had to deal with Ben Roethlisberger twice a year in the AFC North. They’ve endured years of quarterback purgatory while “Big Ben” has guided the Pittsburgh Steelers to two Super Bowl wins. Roethlisberger holds multiple NFL records, has twice led the league in passing yards, and while we’re looking back at 2004, he was the NFL Offensive Rookie of the Year.

Here, Cleveland selects him with the sixth overall pick. Not only does it fundamentally change the history for two franchises, but Roethlisberger gets to become an NFL legend on his home soil.

Former Texas wide receiver Roy Williams made an immediate impact for the Detroit Lions. He set rookie receiving records for the Lions despite playing just 12 games due to injury. In 2006, he had the most receiving yards in the NFC and third-most in the NFL. In 2007, he became the first Lions receiver to make the Pro Bowl since 1998.

Detroit later turned Williams into three picks — including a first-rounder — in the 2009 NFL Draft in a trade with the Dallas Cowboys. It’s a fairly solid return on their investment that they stick with in this 2004 NFL Draft redraft.

Another team holding station is the Atlanta Falcons. DeAngelo Hall snagged 43 interceptions in a 13-year career.

He was a three-time Pro Bowler who still holds the (tied) record for interceptions in a single game (4). Hall had — by far — the best career of any cornerback in the 2004 NFL Draft, and the Falcons couldn’t have addressed the need any better. They also received a second-round pick in the 2008 NFL Draft and a fifth-round pick in the 2019 NFL Draft for him from the Raiders.

Well, some 9,924 receiving yards and 50 touchdowns later, it’s safe to say that he could. Would his career have been the same if he hadn’t landed in New England with Tom Brady? That’s not for me to decide. Yet, with two All-Pro appearances, five Pro Bowl appearances, five 1,000-yard seasons, and two Super Bowls, there wasn’t a more productive wide receiver to come out of the 2004 class.

His selection for the Jacksonville Jaguars represents a significant upgrade on original selection Reggie Williams.

The Houston Texans used their original two first-round picks on the defensive side of the ball. In this 2004 NFL Draft redraft, they do the same, except this time they land Vince Wilfork to anchor their defensive line with the 10th overall pick. The fit makes perfect sense, given that Wilfork ultimately ended his career with the Texans after being drafted by the New England Patriots with the 21st overall pick.

Wilfork went on to earn first-team All-Pro honors in 2012 as well as being named to the second-team All-Pro on three occasions. There is also the small matter of the two Super Bowls he won in New England.

In this 2004 NFL Draft redraft, the Pittsburgh Steelers miss out on their franchise quarterback. With three of their remaining picks that year, they addressed the offensive line, selecting two tackles and a center. With that in mind, they select Arkansas offensive tackle Jason Peters.

Unbelievably, Peters went undrafted out of college and was a free-agent acquisition of the Buffalo Bills. Showcasing that teams sometimes (often) get things wrong, he became one of the most dominant offensive tackles in the league. It’s even more unbelievable when you consider that Buffalo picked him up to play tight end.

Peters landed on the NFL 2010s All-Decade Team after two first-team All-Pro appearances and four second-team appearances. He was a Super Bowl winner with the Philadelphia Eagles.

Jonathan Vilma made an immediate impression in the NFL for the New York Jets. He was the Defensive Rookie of the Year and went to the Pro Bowl in his second season.

Ultimately, he did his best work for the New Orleans Saints. Vilma won a Super Bowl from his time in New Orleans and is a member of the Saints’ Hall of Fame.

Although maybe not recognized around the NFL, Lee Evans was a popular and successful wide receiver for the Buffalo Bills. He set a still-standing record for touchdowns as a Buffalo rookie. He was also the first player in NFL history to record two 80+ yard touchdowns in one quarter.

Eventually, however, he was overtaken on the Bills’ roster by Terrell Owens and Stevie Johnson. He finished his career in 2012 with the Jacksonville Jaguars after a spell with the Baltimore Ravens.

Although original pick Tommie Harris would be voted as one of the 100 Greatest Chicago Bears, they take a different direction in this 2004 NFL Draft redraft. Even though he would spend two years in Chicago later on in his career, Jared Allen finds himself drafted by the Bears instead.

Allen’s résumé is perhaps the most impressive of any, especially considering he was originally a fourth-round selection of the Kansas City Chiefs. Allen led the NFL in sacks in 2007 and 2011. In his 11-year career, he had 136 sacks. A four-time first-team All-Pro honoree, Allen is also listed on the 50 Greatest Minnesota Vikings.

The 24th overall pick of the 2004 NFL Draft, Steven Jackson went on to become one of the most dominant running backs in the NFL. He rushed for over 1,000 yards every year between 2005 and 2012. During his career, he rushed for over 11,000 yards and had 69 rushing touchdowns.

Meanwhile, the Tampa Bay Buccaneers used the 15th overall pick on LSU wide receiver Michael Clayton. Although he had an impressive rookie campaign and later received a Super Bowl ring with the New York Giants, Clayton was ultimately a bust in the league.

Shawn Andrews’ short-lived but ultimately successful NFL career made this selection in the 2004 NFL Draft redraft particularly difficult. He was named a first-team All-Pro in 2006 and earned a seven-year contract extension with the Eagles. However, multiple injuries and a period of absence from the team led to him being released. He signed with the New York Giants in 2010 but once again struggled with injuries.

Other potential selections here include Boston College guard Chris Snee and offensive lineman Scott Wells. Wells was a seventh-round pick of the Green Bay Packers who had a 10-year career in the league.