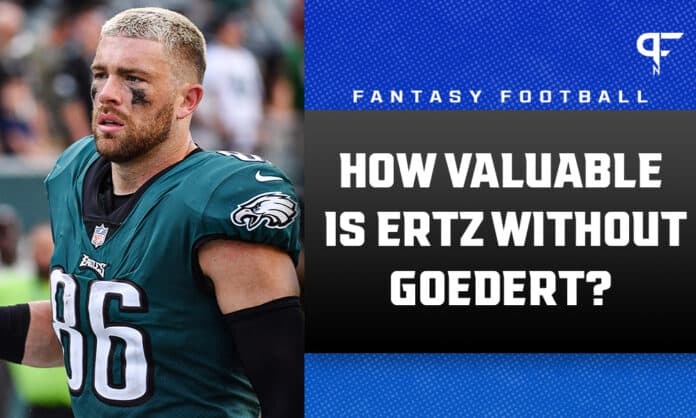 Zach Ertz Start/Sit Week 6: How valuable is he without Dallas Goedert?

With Dallas Goedert out for Week 6, should fantasy managers start Eagles TE Zach Ertz on Thursday night against the Bucs?

By Jason Katz
October 14, 2021
What's in this article? Click to show
Zach Ertz should play more with Dallas Goedert out
What can we expect from Zach Ertz?
The Eagles should be throwing a bunch on Thursday night
Should you start or sit Zach Ertz in Week 6?

Making lineup decisions in fantasy football is always a challenging endeavor. Having to make a critical start/sit decision on Thursday night is even more difficult. With Dallas Goedert unable to play this week, should fantasy managers start Zach Ertz against the Bucs?

Zach Ertz should play more with Dallas Goedert out

Earlier this week, Goedert tested positive and was placed on the reserve/COVID-19 list. Even if the Eagles played on Sunday, it would be a challenge for Goedert to play. Yet, with the game on Thursday, it’s simply not possible for Goedert to log two negative tests 24 hours apart. As a result, Goedert’s absence should make Ertz a near every-down player.

What can we expect from Zach Ertz?

Heading into the 2021 season, most people expected Ertz to be playing for a team other than Philadelphia. It appeared as if Goedert had overtaken Ertz as the Eagles’ primary tight end. Through five weeks, that doesn’t seem to be the case.

Last week, Goedert and Ertz ran the same number of routes. In five games, Ertz actually has a higher target share (14.5%) than Goedert (11%). Over the past two weeks, in particular, Ertz has been more involved with a total of 14 targets.

Without Goedert this week, I’m expecting Ertz to play over 80% of the offensive snaps. The only other tight end on the Eagles’ active roster is Jack Stoll. Ertz has the opportunity to see plenty of volume Thursday night.

The Eagles should be throwing a bunch on Thursday night

The Bucs are the league’s premier pass-funnel defense, and opposing offenses know it. Teams are not even trying to run against Tampa Bay. Bucs opponents are rushing for a mere 45.8 yards per game against them. The next lowest total is 75.6 — a 30-yard difference.

On the other hand, the Bucs allow 314.4 passing yards per game, the most in the league. Simply put, they have the league’s best run defense and the worst pass defense. Expect the Eagles to do what every other team against the Bucs has done and implement a pass-heavy strategy.

Should you start or sit Zach Ertz in Week 6?

The Eagles are completely bereft of playmakers beyond DeVonta Smith. Their second-most talented pass catcher is Goedert. Without him, Jalen Hurts may very well lean on Ertz in a game where I’d expect him to exceed 40 pass attempts.

Ertz is firmly within the top 12 tight ends this week. Unless you have one of the usual every-week starters at tight end, you should strongly consider using Ertz. In addition to the Bucs being vulnerable through the air, they’ve generally struggled against tight ends specifically. The Bucs allow the ninth-most fantasy points to tight ends.

The list of reliable options at tight end seemingly gets shorter every week. We can project three things that favor Ertz this week: 1) Projected increase in volume; 2) Pass-heavy game plan; 3) Negative game script for the Eagles. These factors make Ertz an excellent option for fantasy managers to kick Week 6 off on the right foot.

Jason Katz is a Fantasy Analyst at Pro Football Network. You can follow him on Twitter: @jasonkatz13 and find more of his work here. Don’t forget to listen to the PFN Fantasy Football podcast and check out our free fantasy newsletter.