Week 4 in the XFL saw some disappointing returns from some of our most trusted options. Cam Phillips and Cameron Artis-Payne both struggled to have the impact that many owners were relying on. Now, as we enter Week 5 and the halfway point of the season, it is becoming more of a struggle to identify options at the lower end of the price range who can offer upside. However, if we combine the players who have proven to be solid options so far this season, and look at some emerging trends, we can build strong lineup cores this week. Let’s take a look at the core options for our XFL Week 5 DraftKings DFS lineups.

Another week, another solid performance from Ta’amu. The BattleHawks quarterback has now scored over 20 fantasy points in three of the four weeks of this season so far. He has proven an ability to return solid value both at home and on the road, which given the poor road performances we have seen from some, makes him extremely valuable. Ta’amu is the only QB to start two or more games that completed over 70% of his passes. His value is boosted by the dynamic play he adds with his legs, having rushed for 186 yards and a touchdown.

It is hard to love any of the cheaper options this week, but Cornelius is worth a look if you cannot afford Ta’amu. Since the Vipers committed to him in Week 3, he has averaged over 20 fantasy points per game. However, we saw him struggle on the road in Week 2, and his two good performances have both come at home. Despite that, he has one of the best groups of weapons available, and he also adds value with his legs, having added 69 yards and 2 touchdowns on the ground thus far.

This is a natural pivot away from Cameron Artis-Payne in Week 4. With Philip Nelson under center in the absence of Landry Jones, we can look at the success of these backs in Week 1 when Nelson was marshaling the offense. Dunbar returned a solid performance in line with the rest of his season numbers, while Artis-Payne had by far his worst performance of the season. Through three weeks, Dunbar has 25 targets and 22 receptions, with only his teammate having 20 or more in either of those categories among running backs. Dunbar does lack some upside for GPP but offers a solid option in cash games.

It is challenging to find value among the running backs in this league, and it may be wise just to fill your RB spot with Dunbar and then load your flex spot with high upside mid-priced receivers. However, if you want to double up or go cheaper at running back, then Farrow offers an alternative. He has scored over ten fantasy points in three of the four weeks this season. His value in the last two weeks has been extremely touchdown-dependent, but I expect the Dragons to score some points against a Houston Roughnecks defense that has struggled to stop people regularly.

With Nelson Spruce likely out again this week, McBride is an obvious play and one that will be heavily owned. Among receivers with 10 or more receptions, McBride ranks in the top-10 when it comes to his catch percentage, and among that top-10, he is second only to Cam Phillips and Spruce. McBride also ranks tied for third in touchdown catches among receivers. All of these numbers are particularly impressive when you consider he has only played in two games, scoring touchdowns and registering over 100-yards receiving in both. Phillips’ performance last week demonstrated there are no slam dunk picks, but McBride has to be considered a reasonably safe option that also has an extremely high floor this week.

Holley had his true breakout game in Week 4 as he took his 10 targets and turned it into 8 receptions for 97 yards and a touchdown. Week 4 was his first time with over five targets this season and could be a sign that he has developed into a more significant role in this offense. This week’s matchup is against a Seattle team who have shown an ability to cover outside receivers, which could leave Holley with the opportunity to shine again this week.

Reynolds did not come through for us last week, but despite the lack of production, he had four more targets this week. Reynolds has now seen 26 targets through four weeks and has a matchup against a Roughnecks defense that he could exploit. The Roughnecks defense has allowed more than 20 points in their last three games and allows the seventh-most fantasy points to opposing receivers. This game has the potential to be Reynolds’ big breakout.

The Seattle Dragons have had plenty of struggles on offense this season. Through four games, they have thrown five interceptions. The Roughnecks defense has struggled at times this season but turned Landry Jones over three times last week, as well as forcing a crucial fumble late in the game. The cost is high this week, but with no other apparent options on the table, the Roughnecks present an option with both a solid floor and a high potential ceiling. 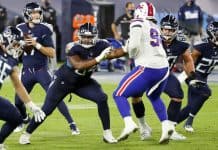 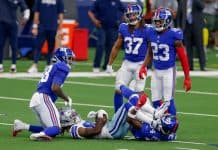 NFL Week 6 Best Bets: What plays do our experts like?