Will Dwayne Haskins be able to turn his career around in Pittsburgh?

Dwayne Haskins has had a difficult start to his career. Can the young QB turn his career around with the Pittsburgh Steelers?

By Lucas Ellinas
August 21, 2021
Jump around this article Click to show
Dwayne Haskins struggled in Washington
Haskins’ overall advanced metrics are no better than his traditional ones
Dwayne Haskins’ weekly grades provide some reasons to be optimistic about the new Steelers QB
Haskins has a chance to turn his career around as a Steelers QB

Dwayne Haskins has had a challenging start to his NFL career. He was pushed out of Washington just two seasons after being drafted 15th overall. Now, the young QB has a chance to redeem himself with the Pittsburgh Steelers.

Haskins didn’t start right away during his rookie year, sitting behind veteran Case Keenum for the first four games of 2019 before briefly seeing the field when Keenum was benched. Haskins was benched a week later, however, and didn’t see the field again until Keenum went down with an injury.

While Haskins managed a better record than the man he replaced, his statistics weren’t anything special. In his nine appearances and seven starts, Haskins totaled 1,365 yards, 7 touchdowns, and 7 interceptions. He did end the season with a couple of solid games, showing some promise going into the next season before sitting out Week 17 with an injury.

Unfortunately, Haskins failed to deliver during his second season. He was benched just four weeks into the season, and despite returning for a brief stretch later in the year, he totaled just 1,439 yards, 5 touchdowns, and 7 interceptions.

Clearly, Haskins didn’t exactly set the league on fire during his first two years. That said, he has played less than a season’s worth of games in total, so those numbers aren’t perfectly comparable to those produced by other quarterbacks during the same time period.

It’s worth looking at his advanced metrics to see if they provide any reasons for optimism for the new Steelers QB.

Haskins’ overall advanced metrics are no better than his traditional ones

While Haskins’ traditional statistics from his first two seasons are underwhelming, his advanced metrics aren’t much better. For evidence, let’s look at the Offensive Value Metric (OVM).

The OVM is a grading system created by the (Bx) Movement to evaluate players based on how much they influenced their statistics, rather than the statistics themselves.

Haskins earned an overall OVM grade of 21.1 in 2019. That is well below average, ranking 25th out of 39 qualifying quarterbacks.

Looking at those grades, it seems that Haskins’ NFL career started poorly and only got  worse from there, no matter how you choose to measure his statistics.

To understand why Haskins had such abysmal overall OVM grades, we need to examine the advanced metrics involved in calculating them.

In 2019, some of Haskins’ metrics ranked competitively when compared to other qualifying quarterbacks. He threw into tight windows on 22.7% of his throws, the second-highest percentage that season.

He also threw the ball a relatively far distance downfield, 8.7 yards on average across all his attempts and 6.4 yards on completions. Both of those numbers ranked inside the top 15.

His completion statistics, however, were on the complete opposite end of the spectrum. He completed just 58.6% of his passes, the second-lowest percentage of any quarterback. According to the NFL’s projections, that number was 4.6% lower than it should have been, the third-worst differential.

In 2020, Haskins’ numbers fell in nearly every category. He threw into tight windows less often (17.4%) and significantly less further downfield — 6.7% across all his passes and 3.6% on completions.

And while his completion percentage actually increased slightly to 61.4%, that number was 7.1% below expectation, the worst differential in the NFL by a wide margin.

Dwayne Haskins’ overall OVM grades from 2019 and 2020 are abysmal, but his weekly grades reveal a surprising amount of nuance.

The charts below show his grades from each week of the last two seasons, marked by the black dots. For comparison, the yellow line represents the league average OVM grade for quarterbacks from each of those seasons. 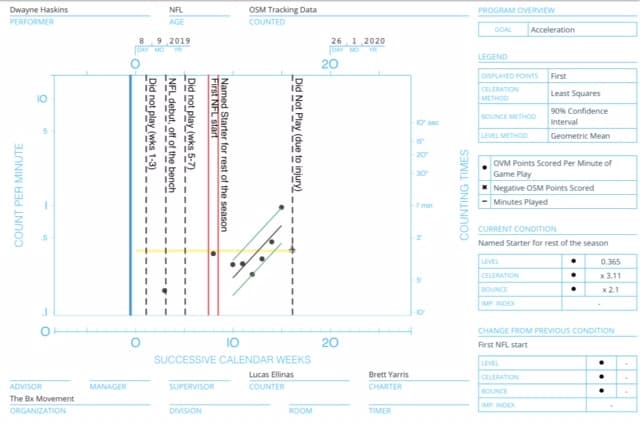 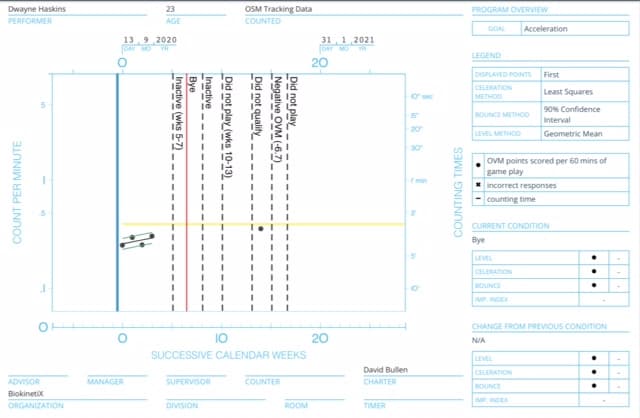 Across the board, Haskins’ 2020 season was basically a disaster. Every grade he earned was below the league average. That includes a grade of -6.7 in Week 16, indicating that he actively detracted from his team’s success.

However, his rookie year tells a different story. While he started extremely poorly, his last two games showed real promise. His Week 16 performance was particularly impressive, earning him a grade of 57.3, the 12th-highest grade received by any quarterback in the last five seasons of OVM data.

Clearly, when Haskins is playing well, he is capable of putting up elite performances. If he can get even close to that level on a more consistent basis, he could be one of the league’s best quarterbacks.

Because of how inconsistent Haskins’ weekly grades were, it’s worth taking a closer look at the best and worst performances of his career. Let’s start at the low end: his grade of -6.7 in Week 16 of 2020.

In that game, Haskins threw into tight windows at a relatively high 14.3% of his passes, and those passes traveled an average of 8.2 yards downfield on all of his pass attempts. That isn’t particularly low, but Haskins only completed them 2.1 yards downfield.

The real killer, though, was his extremely low completion percentage of 50%. Even worse, that number was an abysmal 20.3% lower than expected.

On the complete opposite end of the spectrum is Haskins’ 57.3-point performance in Week 16 of the season prior. He threw into tightly contested windows on an extremely high 40% of his throws, 11.2 yards downfield on all of his throws, and 9.7 yards on his completions.

Most impressively, he completed 80% of his passes, a ludicrous 21.1% higher than expected.

The difference between those two sets of numbers is astounding and really hammers home just how inconsistent Haskins has truly been during his short time in the NFL.

Clearly, Haskins had an underwhelming start to his career. There have been high points, but last season, in particular, was a disaster. Still, we can’t place all of the blame on Haskins.

The situation in Washington was extremely volatile during Haskins’ time there, and instability is never good for an inexperienced quarterback.

Despite those difficulties, Haskins has shown promise at times. Perhaps in Pittsburgh, learning under legendary NFL figures like Ben Roethlisberger and Mike Tomlin, Haskins can finally live up to the potential some saw in him coming out of college.