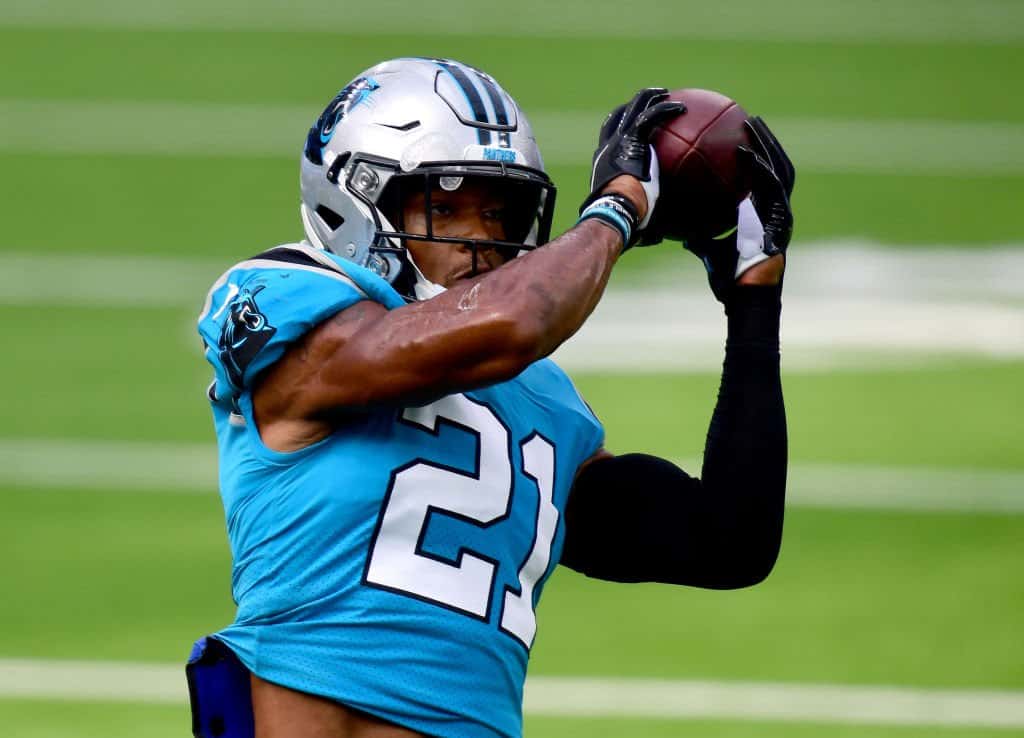 INGLEWOOD, CALIFORNIA - SEPTEMBER 27: Jeremy Chinn #21 of the Carolina Panthers warms up before the game against the Los Angeles Chargers at SoFi Stadium on September 27, 2020 in Inglewood, California. (Photo by Harry How/Getty Images)
What's in this article? Click to show
Two NFL Rookies: Similar skill set but a different journey to the NFL
Athletic comparisons between Chinn and Simmons
Chinn overcoming that “poor man’s Isaiah Simmons” tag
Why is Chinn performing the better of the two NFL rookies?

Carolina Panthers defensive back Jeremy Chinn leads all NFL rookies in total tackles through four weeks of the 2020 NFL season. Meanwhile, the eighth overall pick of the 2020 NFL Draft, Arizona Cardinals linebacker Isaiah Simmons, has barely seen the field. Both were highly touted for their athleticism and versatility coming out of college, with some analysts ranking Simmons as the number one prospect in the class. Why is it then that Chinn, and not Simmons, is translating that athleticism into NFL success?

Two NFL Rookies: Similar skill set but a different journey to the NFL

The two NFL rookies could not have come from more polar opposite college careers.

Despite the staggering void between their respective level of college competition, the two NFL rookies were united by a shared skill set and attributes valued highly by the NFL.

Before his senior season at Clemson, where he was defined as a linebacker, Simmons had spent three seasons roaming the field as a safety. During his final year with the Tigers, Simmons lined up at an eye-watering array of positions. He saw snaps on the defensive line, in the box, lined up at both slot and wide cornerback, and as a traditional deep safety.

Related | Who do I start in fantasy football in Week 5? Who do I avoid?

The phrase defensive swiss army knife has never been more applicable to an NFL Draft prospect.

Chinn spent four years at free safety for the Salukis while showing the same propensity to impact multiple facets of the game as Simmons. With 13 interceptions and 31 pass break-ups, Chinn was clearly a ball hawk in the secondary but showcased an ability to impact the run game and get after the quarterback too.

Athletic comparisons between Chinn and Simmons

Then there is the athletic comparison between the two NFL rookies.

Analysts, scouts, NFL personnel, fans all raved about Simmons’ athletic ability during his time at Clemson, and the assumption was that he would blow everyone away at the 2020 NFL Combine. The assumption was correct, and an impressive athletic performance solidified his standing as a presumptive top 10 selection.

However, as impressive as Simmons was at the NFL Combine, Chinn was every bit as impressive, helping to elevate the small-school standout’s NFL Draft stock even further.

We can actually quantify and compare the performance of the two NFL rookies using Relative Athletic Score (RAS). RAS uses a simple 1-10 score to help compare players against their contemporaries using categories such as size, speed, explosion, and agility.

At the 2020 NFL Combine, Simmons received a RAS of 9.97, the seventh-highest RAS at the linebacker position out of over 2000 tested at the position since RAS’ inception in 1987. The most impressive part of Simmons’ combine performance was his 4.39 40-yard dash, which helped contribute to an elite speed score. He also received an elite grade for his explosion, made up of the vertical and broad jumps, while a lower weight and strength score compared to other linebackers meant he only received a good size grade.

Chinn received elite grades across the board as he recorded a perfect RAS of 10.00, the highest RAS for any free safety since 1987. Whilst Chinn recorded a slightly slower 40-yard dash time than Simmons, 4.45 seconds, he outperformed Simmons in the vertical and broad jumps, with his 11’06” broad jump ranking third all-time at the free safety position.

Simmons had been billed as an “athletic freak,” but Chinn proved that he was a match for the Clemson star despite some NFL analysts describing him as “a poor man’s Isaiah Simmons.”

Through four games of the 2020 NFL season, it has looked the other way around.

Chinn leads all NFL rookies with 35 combined tackles, a total that sees him sit just outside the top 10 for the whole of the NFL. He’s also secured a tackle for loss, a quarterback hit, one quarterback hurry, and a quarterback pressure in four games.

Meanwhile, over in Arizona, Simmons has been a ghost in the Cardinals defense. He has just six combined tackles to his name. For a player who was impressive in coverage for Clemson, he has allowed a 100 percent completion percentage when targeted, a touchdown, and a passer rating of 131.2 to the opposing quarterback.

Although Chinn’s coverage statistics are not league-leading, he has outperformed Simmons in that regard as well. Chinn has allowed 14 completions on 20 targets, a 70 percent completion percentage, and allowed a 95.8 passer rating.

Why is Chinn performing the better of the two NFL rookies?

The biggest question mark for Simmons coming out of Clemson was how his positional versatility would translate to the NFL and how a team could transform his athleticism into results on the field.

The Arizona Cardinals are still trying to answer that question.

Through four games, Simmons has played just 45 snaps, just 17 percent of the total possible defensive snaps for the season so far. He’s actually featured more on special teams – 20 percent of total special teams snaps – than he has on defense.

Following the defeat to the Panthers last week, head coach Kliff Kingsbury told reporters, “We’re still trying to work him in. We want to put him in a position to be successful, to understand our scheme. It’s a work in progress still.”

Simmons was at his best using his explosion and speed to get after the quarterback or curtail a rush attempt in the backfield, but in his limited snaps, he has only been used to blitz four times. The Cardinals just aren’t getting the best use of their first-round pick.

The Cardinals would be better just finding a way, any way, to get him onto the field and make plays for a defense that has shown improvements from last year but is yet to face it’s toughest challenges on the schedule, namely a Seattle Seahawks offense that has exploded into life early in the 2020 NFL season.

Which is exactly what the Panthers do for Chinn

Chinn has played in 252 snaps through four games, representing 97 percent of the team’s total defensive snaps. Carolina gets Chinn on the field, lines him up anywhere and everywhere, and watches him go to work. In the game against the Cardinals alone he was lined up as a traditional safety, cornerback, linebacker, and even over the center.

You can’t watch a Panthers game without noticing Chinn flying to the ball and having an impact on the play. It’s a perfect example of how to use an athletic and versatile playmaker to make your team better.

The Panthers clever utilization is why, of the two NFL rookies, Chinn has had a more productive start to his NFL career.