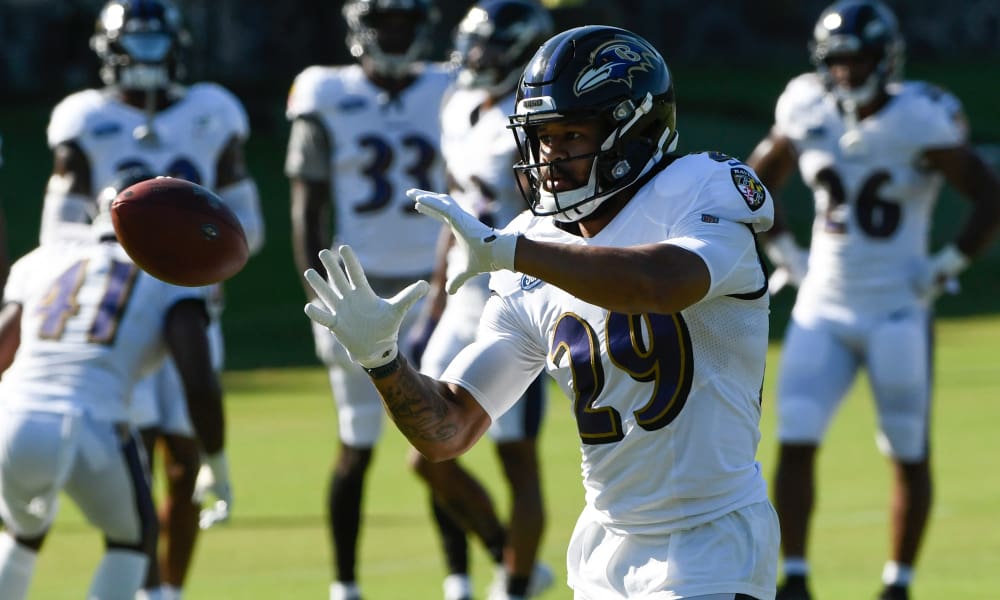 Aug 17, 2020; Owings Mills, Maryland, USA; Baltimore Ravens safety Earl Thomas III (29) catches a pass during the morning session of training camp at Under Armour Performance Center. Mandatory Credit: Tommy Gilligan-USA TODAY Sports
What's in this article? Click to show
Thomas’ fight was the final straw for the Ravens
What does Thomas’ release mean for the Ravens?
Things are also potentially complicated for Thomas’ suitors in 2020
Thomas’ release does not end the story for the Ravens

It is safe to say it has been an eventful offseason for Earl Thomas. Ultimately, it all became too much for the Baltimore Ravens, who felt they had no choice but to release their headline free agent signing from a season ago following a fight on Friday. Thomas is now back as a free agent and plenty of teams will be tempted by a player of his quality. However, with the wording of his release being “personal conduct that adversely affected the Baltimore Ravens,” Thomas becomes a free agent with plenty of questions still swirling beyond just his team for 2020.

Let’s take a look at the situation which led to Thomas’ release, what it means for the Ravens and the situation for teams looking to add Thomas.

Thomas’ fight was the final straw for the Ravens

Back in May of this year, Thomas made headlines in one of the more spectacular storylines in the recent history of the NFL. Without delving into the details too much, Thomas had his wife point a gun at him after finding him in bed with another woman. At any other time, that storyline would have been spectacular. But in a world that was devoid of sports for an extended stretch, the story dominated the headlines longer than either Thomas or the Ravens would have liked.

However, by the time training camp rolled around, that incident had become a somewhat small note in a very interesting offseason. Then Thomas put himself back in the news after reacting badly to being called out by teammate Chuck Clark on a blown coverage. Thomas later posted the video of the play to Instagram, stating he had taken responsibility and was trying “to explain calmly” but was “met with built-up aggression.”

Ultimately, this incident was the final straw, and the teams “Leadership Council”, a group of players considered to be the team leaders, relayed that they no longer want Thomas around. With trust lost among his teammates and an offseason with a couple of embarrassing incidents for a Ravens team that are hoping to be serious Super Bowl contenders this season, Thomas was released by the Ravens.

What does Thomas’ release mean for the Ravens?

This is where things get complicated. Thomas signed a four-year contract worth a total of $55 million, including a $20 million signing bonus. On top of that, the Ravens guaranteed the first two seasons of Thomas’ contract, $2 million in 2020, and $10 million in 2021.

The signing bonus is the first place to start when un-tangling this situation. While that $20 million in signing bonus is paid upfront, the effect on the cap is split evenly across the four years of the deal, $5 million per year. 2020 saw the first $5 million count, leaving $15 million remaining. A further $5 million of that will count in 2021, but the remaining $10 million will now all count against the Ravens cap in 2022. The reason that $10 million hits the cap in 2022 — and not 2021 — is that Thomas was released after June 1st.

Therefore, where we sit right now is with Thomas counting at least $5 million against the 2020 cap and $10 million against the Ravens 2021 cap. However, there is now a question mark remaining around his $10 million in guaranteed salary he was due in 2021. If the Ravens believe he violated the terms of his contract relating to his conduct, they can notify him that they will not be honoring the guarantee.

Related | The top 25 safeties in the NFL

That puts the ball in the court of Thomas and the NFLPA. Ian Rapoport reported that Thomas has “specific, players-friendly language explaining that $$ can be voided upon suspension (not fines).” As Thomas was not suspended prior to his release, it becomes debatable whether the Ravens can refuse to honor the guarantee in the deal.

Therefore, it is likely that the situation with Thomas will end with a grievance being filed by Thomas and the NFLPA. In terms of the Ravens cap situation, this adds a further complication. While Thomas’ grievance is being decided upon, he will count 40% of whatever amount he decided to file for. Assuming that Thomas files for the full $10 million, Thomas will, therefore, count $4 million in salary and $5 million in pro-rated signing bonus against the Ravens’ cap in 2020.

If Thomas wins his grievance, then it is likely the remaining $6 million will count in 2021, on top of the $10 million in prorated signing bonus. However, if the grievance is found in the direction of the Ravens, they will receive $4 million as a salary cap credit, likely in 2021.

There could yet be further complications if the Ravens decide to go after some of the signing bonus paid to Thomas. However, for now, Thomas leaves Baltimore having earned $22 million for one year’s work, with the potential for that to rise to a massive $32 million.

Things are also potentially complicated for Thomas’ suitors in 2020

It was reported by Tom Pelissero that Thomas also has offset language in his contract, further complicating the situation. Essentially, that means that whatever money his next potential suitors pay Thomas this season will be deducted from his cost to the Ravens’ cap. For example, if his new team pays him $5 million this season, the salary the Ravens are on the hook for would be the remaining $5 million, reducing his grievance cap hit to $2 million in 2020, with a potential further $3 million due to count against the cap in 2021.

Usually, a new team would use this offset situation to get Thomas on the cheap this season. With the player assured of being topped up to $10 million by his old team, the new team will often pay the minimum required, slightly over $1 million. However, the uncertainty of a grievance complicates that further.

That $10 million is no certainty to head the way of Thomas once the grievance is solved, meaning he does not have that certainty he usually would have. Therefore, rather than being willing to sign for a veteran minimum contract, Thomas may decide to give himself security against the grievance by recouping as much money as he can in 2020. That could be a sticking point for many teams who will be keeping a close eye on their cap, hoping to roll as much space as possible into the 2021 season when the cap will drop to a potential $175 million.

Thomas’ release does not end the story for the Ravens

While the Ravens will be looking to move on as soon as possible on the field, there is a lot of run off the field to this story. In the short term, they will have their eyes on two things; firstly, who will sign Thomas, and for how much; secondly, who is going to take the place of Thomas in the starting lineup. For John Harbaugh and the coaches, the second situation is a far more immediate concern, as this defense was promising in 2019 and needs to be again in 2020 if they are to fight for a Super Bowl.

For the front office, the terms of Thomas’ new contract will change a lot about their cap situation. With less than $5 million in cap space prior to Thomas’ release, they will want to carry as much as possible into the season. If Thomas does demand a mid-range salary from his new team, then the Ravens can receive an immediate cap relief, with a further relief coming as and when the situation heads to a grievance.

For a team that contains relatively young players in crucial positions on both sides of the ball but is also hoping to challenge immediately for a championship, this is the last thing they needed. Harbaugh will now need to re-focus his team and have them ready to go once teams take to the field in three weeks. A quiet training camp has gone out of the window for the Ravens, but at least they have time to get their young players re-focused and prepared ahead of 2020’s opening week.