What kind of impact can Albert Wilson have on the revamped Dolphins’ offense?

By Lucas Ellinas
June 15, 2021
What's in this article? Click to show
Adverse circumstances have hurt Albert Wilson in recent seasons
An in-depth examination of Wilson’s 2019 season
Wilson is no stranger to high OVM grades
Wilson probably won’t be a star for the Dolphins in 2021, but he can be a valuable piece
Want more NFL news and analysis?

The Miami Dolphins had one of the NFL’s worst receiving groups last season (check out this article if you don’t believe me). In response, the team made sweeping changes, signing Will Fuller in free agency and drafting Jaylen Waddle with the sixth overall pick in the most recent NFL Draft. However, an underrated change for the Dolphins going into 2021 is the return of Albert Wilson. The advanced metrics show that the veteran wide receiver can be a valuable contributor to Miami’s offense next season.

It has been a strange few years for Wilson. His debut season with the Dolphins seemed incredibly promising. After a few reasonably successful weeks, Wilson had a breakout game in Week 6, totaling 155 yards and 2 touchdowns, essentially willing Miami to a victory over the Chicago Bears.

Unfortunately, a week later, his season was cut short by a severe hip injury that kept him out for the remainder of 2018 and appeared to hamper his play the following year as well.

Then, Wilson chose to sit out the entirety of the 2020 season due to concerns regarding COVID-19. Thus, it has been a while since Wilson played significant minutes for the Dolphins.

An in-depth examination of Wilson’s 2019 season

To help us determine how effective Wilson could be during his full return to action in 2021, let’s look at the last time he was a major factor in Miami’s offense: 2019. Although he didn’t see a repeat of his explosive performance from 2018, Wilson quietly had a solid 2019.

Thanks in part to his injury, his numbers weren’t exactly awe-inspiring. He totaled only 351 yards and 1 touchdown. Fortunately for Wilson, we have other methods for determining a player’s value than purely their box scores.

For a more accurate impression of Wilson’s 2019 performance, let’s turn to the Offensive Value Metric (OVM). The OVM is a grading system created by the (Bx) Movement to evaluate players based on how much they contributed to the statistics they produced. It paints a clearer picture of players like Wilson, whose statistics were limited by factors outside their control.

During the 2019 season, Wilson earned a grade of 37.36. That made him Miami’s highest-graded player during that season. On the surface, that might not seem like much of an accomplishment. After all, most of the Dolphins’ wide receivers and tight ends that season were, to put it kindly, horrifically ineffective, earning incredibly low OVM grades.

Still, when compared to other wide receivers across the NFL, Wilson performed admirably. His OVM grade from 2019 was the eighth-highest by a wide receiver in the league. Clearly, while Wilson was a role player for the Dolphins that season, he filled that role with incredible efficiency.

Explaining why Wilson’s grade was so high in 2019

Wilson’s impressive grade in 2019 might seem counterintuitive. After all, he wasn’t a high-impact player in the traditional sense. In order to explain why he earned such a high grade, we need to look at the advanced metrics involved in calculating a wide receiver’s OVM grades.

Wilson performed reasonably well on most of those metrics, but two, in particular, stand out.

The first was his catch percentage. Wilson caught 69.5% of his targets in 2019, the tenth-highest percentage produced by a wide receiver during that season.

Wilson’s best attribute, however, was his ability to create separation from defenders. He averaged a staggering 3.5 yards of separation when targeted, the second-highest average among all qualifying wide receivers.

Examining Wilson’s Weekly grades from the 2018 and 2019 seasons

For a deeper look at Wilson’s time with the Dolphins, let’s examine his week-to-week performances from 2019. While we don’t have an overall grade for Wilson from 2018, he did earn a few weekly grades we can study.

The charts below show his weekly grades from those two seasons, represented by the black dots. For comparison, the average season-long grade produced by wide receivers from each respective season is marked by the yellow lines. 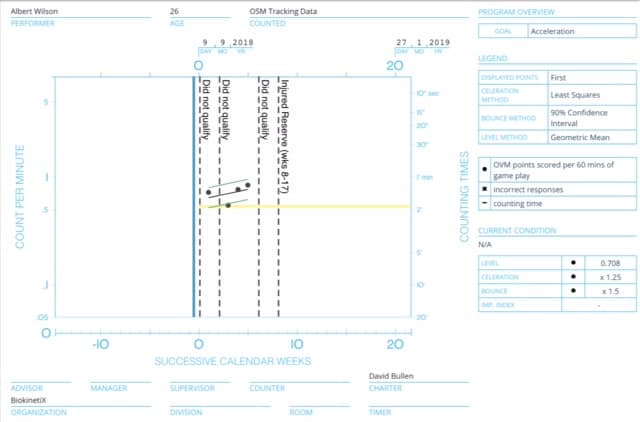 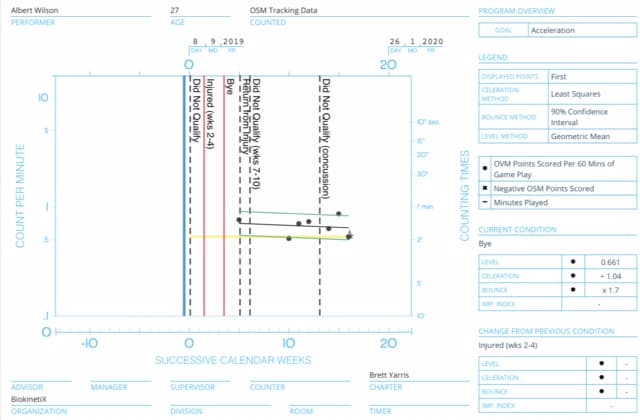 Before his 2018 injury, all of Wilson’s grades were at or above the league average, often by a wide margin. That trend continued when he returned in 2019. Many of his games across the two years came in above 40 points. He even produced a pair of performances over 50 points, one in each season.

During his time in Miami, Wilson has been a consistent contributor to the Dolphins offense. It hasn’t always shown up in his box score, but the advanced metrics reveal the truth.

Wilson is no stranger to high OVM grades

Looking at his career overall, we can safely say that, no matter where he is or what his role with the team might be, Wilson has consistently made himself a valuable part of his offense.

Wilson probably won’t be a star for the Dolphins in 2021, but he can be a valuable piece

Fuller and Waddle will likely be the focus of Miami’s offense in the coming season. As such, we probably won’t see too many statistical explosions from Wilson in 2021. But every legendary star needs a solid supporting cast, and the data shows that Wilson can certainly fill that role. And if he has successfully rehabilitated after his injury, we might see a repeat of his stellar 2018 performance. Even if we don’t, Wilson should be a valuable component in the Dolphins’ efforts to become a playoff contender next season.

Keep Reading! What kind of fallout will the Julio Jones trade have on the Titans offense?