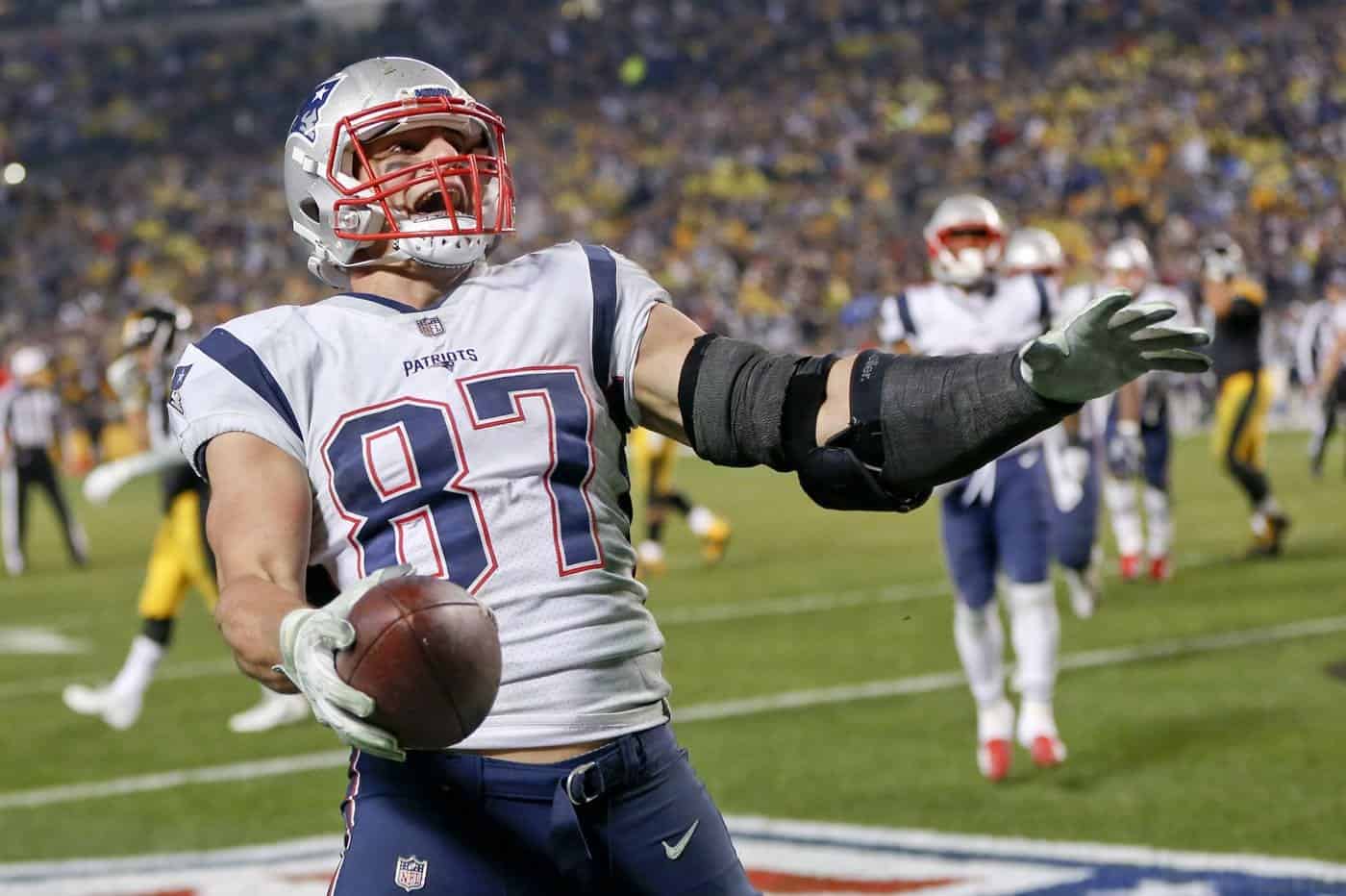 Rob Gronkowski - New England Patriots
What's in this article? Click to show
This week, host and PFN Podcast Network Director Kai’Chien Chisholm talks about the latest news surrounding Rob Gronkowski’s retirement. He also talks about the possible elimination of the onside kick.
What does this have to do with Gronkowski and the Patriots?
The NFL will consider fourth and 15
Questions to think about during the show
The search is still far and wide
Related Posts

This week, host and PFN Podcast Network Director Kai’Chien Chisholm talks about the latest news surrounding Rob Gronkowski’s retirement. He also talks about the possible elimination of the onside kick.

During the pod, Kai’ details why he thinks New England Patriots tight end Rob Gronkowski should be a guaranteed first-ballot Hall of Famer. Gronkowski was drafted with the forty-second pick in 2010 NFL Draft to the team that takes talent and turns them into Hall of Fame level players, the Patriots. In his rookie season, Gronkowski started 11 games while playing in all 16. Yeah, he got 42 catches, 546 yards, his longest catch was 28 yards, but he caught ten touchdowns as a rookie. That immediately put him as the number one option compared to a fellow rookie, Aaron Hernandez.

Hernandez was also drafted in that 2010 NFL Draft and put up some good numbers himself. We can’t get into talking about Hernandez without covering our bases. Hernandez was a star player at the University of Florida, but that isn’t what he is known for which is no one’s fault but himself. Hernandez is known for the murder of Odin Lloyd; he was convicted of first-degree murder and was given a sentence of life in prison without parole.

This then ended a lengthy case for the Lloyd family and sent Hernandez to prison for the rest of his life. The former Patriots and Florida Gator tight end was found dead in his cell in Lancaster, Massachusetts hanging from his bed sheets on April 19th, 2017 at 3:05 am EST from an apparent suicide.

What does this have to do with Gronkowski and the Patriots?

Well, it brings up why Gronk could have possibly made that extra jump. In 2014, Gronk put up his second-best career numbers while being the sole tight end option on the team. He caught 82 balls for 1124 yards and 12 touchdowns. In 2015 Gronk continued his dominance at only 26 years old and caught 72 balls for 1176 yards (ten less and more yardage!) and only one less touchdown with 11 caught.

Finally, Gronk participated in a full season of playoff games, 16 total. Against the best competition, the league has to offer what did Gronk do? Oh you know, he just put up 81 catches 1163 yards and 12 touchdowns. Gronk is a well-oiled machine. Although his body is stopping him, he will go down as one of the greatest tight ends to play the game.

The NFL will consider fourth and 15

Honestly, there isn’t much to say about this. Practically eliminating the onside kick instead of challenging teams to be better at them is insane.

Should Gronk be a first-ballot Hall of Famer? What do you think about the new rules the NFL coaches are championing?

The search is still far and wide

While having his duties as a podcast host for PFN, Kai’ also doubles as the Podcast Network Director. Now, an opportunity has become available for someone to join the PFN Podcast Family. He is looking for someone who is dedicated to their craft. Interested in hosting a podcast for the Pro Football Network? Follow Podcast Network Director Kai’Chien Chisholm on Twitter: @SamuraiiRadio and let him know you are interested. Kai’ has his DMs open, so make sure to shoot your shot. While you’re on Twitter make sure to also follow Pro Football Network: @PFN365. Be sure to also check out the other amazing podcasts and articles at www.profootballnetwork.com.

Fantasy playoff rankings for the NFL Divisional Round