The Miami Dolphins offense is the best in the NFL with Tua Tagovailoa on the field. How have they flipped the script in just one offseason?

To say that the Miami Dolphins offense has improved from a season ago would be a slap in the face. They’ve embarked on an offensive revolution, only slowed down by Tua Tagovailoa missing time with a concussion. The marriage between quarterback and head coach has rejuvenated a gunshy passer, and the addition of Tyreek Hill has been nothing short of extraordinary.

The Most Efficient Offense in the NFL

If we filter out the time Tua has missed, no passing attack and no offense as a whole has been more efficient than the Miami Dolphins, according to Football Outsiders DVOA rankings.

Tagovailoa is putting up MVP-level passing numbers, and Hill is well on his way to shattering the single-season receiving record set by Calvin Johnson. His 122.7 yards per game is a tenth away from Johnson’s per-game mark in 2012, and Hill gets to play an extra game.

One of the most significant factors aiding in the success of the Miami passing attack has been its ability to attack the middle of the field with unbelievable results. We’d seen Kyle Shanahan accomplish good production with Jimmy Garoppolo and company doing a similar thing.

But the Miami Dolphins have a few hypercars in their offensive arsenal, and their quarterback is better than the one in San Francisco.

Supercars are fast. They produce ridiculous horsepower and most hit the 200 mph mark. Hypercars are even faster, hitting 0-60 marks quicker on their way to an even higher top speed. However, some supercars are a bit slower but more agile through the corners, making them quick around the track. Hypercars blast through corners at neck-breaking G’s, making them the fastest cars in the world.

Price is another differentiator. Supercars usually range between $100,000 and $1 million, while hypercars exceed the million mark. But arguably, the most crucial difference is rarity. Hypercars come in a very, very slim supply. They are the most exclusive status pieces in the world.

And that is why the Dolphins’ offense is not replicable. Hill and Waddle are the hypercars that don’t exist on any other roster.

Four major factors contribute to Hill and Waddle ranking No. 1 and No. 3, respectively, in yards per route run.

Not all of Miami’s passing production is over the middle of the field, but this chart, courtesy of TruMedia, shows how insanely productive Tagovailoa and the Dolphins’ offense have been over the middle. 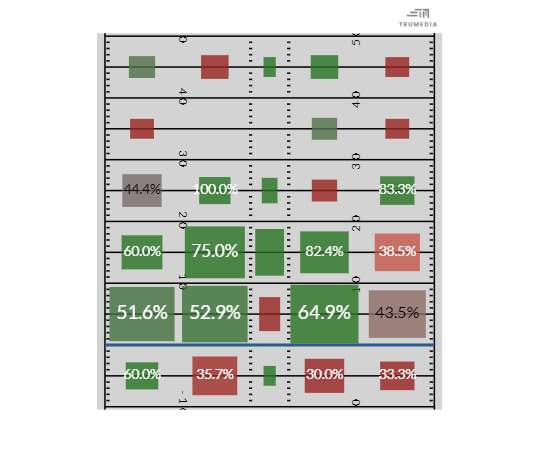 And it all works together. They could not run an offense that consistently attacks the intermediate middle if Tua wasn’t so adept at seeing through the trash that often hangs out in the area. He’s improved his eyes and anticipation and uses his receivers’ insane speed and route-running ability to the fullest. And that was on full display against the Chicago Bears.

There have been better examples of Tua’s anticipation throughout the season, but Miami’s midfield display against Chicago brought out some of the best from the team.

The Bears decide to run Tampa 2 here, a coverage they made famous way back in the day before it died and came back to life recently. Remember, the NFL is cyclical.

The MIKE linebacker immediately flips his hips open to the trips side to defend the pole should a receiver run up the seam, which Miami does here. Tua’s eyes start right, but he snaps his eyes backside, where he sees the left hash vacated by the defense. That area is the “soft spot” in Tampa 2.

Waddle, Hill, and Trent Sherfield are all lined up in trips between the hash and the numbers. Who’s getting the least attention in this formation?

The Bears are in Cover 2 here, but not the Tampa variation. Sherfield releases vertically and is jammed at the line. However,  Waddle, aligned as the No. 3 in the trips, releases outside immediately, cutting the cornerback’s jam short, as he’s forced to carry Waddle outside.

Hill finds space between the two underneath defenders who have no awareness whatsoever of Sherfield sneaking behind them. They remain flat, and the safety gains depth immediately.

This leaves open grass for Tua to attack as he hits the apex of his drop and hitches forward.

McDaniel puts the Dolphins in a tight 21 personnel look, which most likely puts Chicago in the exact look he wanted to exploit, Cover 3. This max-protect play-action concept is meant to put the lone middle safety in conflict.

When Hill and Waddle are the two outside receivers against base defensive personnel, there isn’t enough speed in the world to consistently defend them. Waddle runs a deep crosser, and Hill runs a post.

The safety has a choice to make. He can jump the crosser and hope the Cover 3 cornerback flowing Waddle peels off to the post, or he can remain deep and hope the corner can carry or the linebackers can get depth to defend the crossing route.

In reality, Tua could probably release this pass to Waddle right over the middle of the field. Tua can see the linebacker’s name on the back of his jersey. That’s a green light to attack past his earhole.

But the protection is holding up, which means he can let the route develop further. That pass gets a bit dangerous because the flat defender caught Tua’s eyes and almost made a play on the ball, but Tua does a nice job giving the pass enough air to stay safe.

It’s a bit behind Waddle and incomplete, but the play here was a success from a process perspective.

You cannot tell me that the Bears’ safeties weren’t absolutely terrified of the Dolphins’ speed on the outside. A similar play was intercepted by Eddie Jackson against Dallas a few weeks ago. He wasn’t afraid of Michael Gallup beating him downfield.

The four-strong look is a nice wrinkle to try and get the coverage to flood toward the outside. The out route from Waddle clears the linebacker from the hashes, where Tua is looking to hit Hill bending over the middle.

At the time this ball is thrown, we’re actually looking at Some-21 and not All-22. Jackson is playing in Gregg Williams’ land, out of the picture, giving the speedy Hill 10-plus yards of cushion.

There are a lot of examples of this phenomenon while combing through Miami’s tape. If we’ve learned anything about the NFL this year, it’s that the situation surrounding quarterbacks might be even more important than their individual talent. Aaron Rodgers and Tom Brady both have descended into mediocrity as the situation around them has crumbled.

Tua was gifted the most dangerous receiver in the NFL and an offensive-minded coach that knows how to maximize everyone’s strengths.

Tua still has to make the reads and throws, and there is absolutely nothing wrong with it being easier for him than it’s been in the past. He’s playing incredibly well independent of his surroundings, even if it’s impossible to completely separate the two.

The above play-action concept comes in a few different shapes and sizes, but those five pillars remain. McDaniel has used this from a few different looks in 2022. It doesn’t matter if the defense is in man or zone, it’s a difficult concept to defend.

The backside cornerback is run downfield, which usually influences the safety to that side as well. Linebackers can gain depth to try and stop the crosser, but Miami is usually outnumbering the coverage two-to-one between Hill and the flat receiver.

Tua’s biggest weakness is that he doesn’t have an arm like Patrick Mahomes, Josh Allen, or Justin Herbert. If he did, Miami wouldn’t just have the best offense in the league, they’d have the most disgusting offense of all time.

That is the impact having two hypercars has on opposing defenses. What Miami is doing is not replicable. Sure, other teams have supercars. Other teams have built drag racing or track day cars that fit a niche.

But no other team has a Jaylen Waddle, let alone a Waddle and a Hill. We can’t separate Tua’s performance from the receivers. They’re a massive part of his success.

But the fourth-year quarterback is playing with more confidence than he ever has, and that’s probably more a product of his relationship with McDaniel, and McDaniel’s personality in general. If he is the same guy in the locker room as he is during pressers, Miami has the funniest, coolest coach in the league. That matters!

But like a hypercar, everything has to work together in congruence for the offense to find success. We’ve seen the offense in San Francisco dissolve into mush when Garoppolo gets injured. Teddy Bridgewater is a veteran backup with starting experience, and there was a clear difference between Tua and him playing under center.

It all works together, and it’s a beautiful sight to behold.