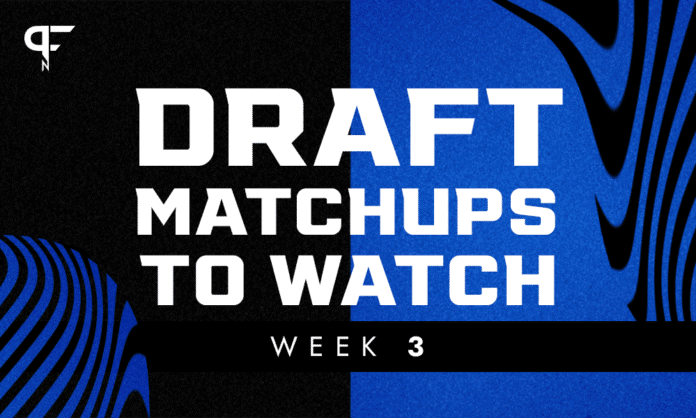 Which college football prospects should you keep an eye out for in Week 3 of the 2021 regular season? Here's a preview of what to watch for.

College football carries on with Week 3 play this coming weekend, and as always, there are plenty of next-level prospects to watch! Here’s a look at some of the best battles on deck. What should you keep an eye out for?

Let’s take a look at some of the best Week 3 prospects and matchups to watch!

It feels like Alabama is on this list every week, and there’s a reason for that. Alabama is a gold mine for NFL Draft prospects every year. That may or may not correlate with their constant domination on the college football stage. Few teams can compete with the Crimson Tide, but the Gators do have a few top talents who can help them put up a fight.

This is an extremely intriguing matchup between two prospects who could ultimately be first-round picks in the 2022 NFL Draft. John Metchie III is a great deep threat with twitch at the line and explosive burst downfield. Kaiir Elam, meanwhile, is a long, fluid cornerback with excellent instincts, physicality, and closing speed.

The fascinating aspect — regarding this battle between NFL Draft prospects — is their differences. At first glance, Metchie feels like the kind of receiver that would give a longer, rangier cornerback like Elam trouble. However, Elam might have the explosiveness and hip fluidity to match Metchie on many of his routes. And at the catch point, his receiver background comes through big-time. This is a battle with big ramifications next April.

Zachary Carter is a fun defensive line prospect. The Florida defender stands around 6’4″, 285 pounds, but he can line up on the edge or on the interior. Thus, he may find himself lined up opposite a future top-five pick in Evan Neal on more than one occasion. It’ll be a big test for Carter, but one that could catapult his stock if he delivers.

Neal is a massive, dominant physical specimen with the athleticism and power to negate any rusher. But Carter, with his combination of size and explosiveness, has some ability in his own right. He kicked off the year with a 3-sack outing, then added 2.5 tackles for loss against South Florida in Week 2. He’s moving up the college football prospects board, and a strong showing against Neal would be massive.

Similarly, edge rusher Brenton Cox Jr. also deserves attention in this game. He’s smaller than Carter and hasn’t been as productive in 2021. But he has fans, nonetheless.

Michigan State is sneakily stocked with NFL Draft talent. In Year 2, Mel Tucker’s team has taken a visible leap, and with a win against Miami, the Spartans could reinforce their standing against the rest of the league. Miami will give Michigan State a fight, but the upstart Big Ten squad has the talent to match. Here’s a look at some particularly enticing matchups.

Kenneth Walker III — a transfer from Wake Forest — has been the engine behind the Spartans’ offensive success. Through two games, Walker has 321 yards and 5 touchdowns on 30 carries.

The 5’10”, 210-pound back brings a desirable skill set as a runner, possessing a strong blend of contact balance, open-field burst, and vision. He could ultimately rise into the middle-round conversation, but he has one large obstacle on Saturday.

Nesta Jade Silvera saw his first 2021 action against South Florida in Week 2. He was immediately a defensive standout, accruing 4 total tackles and 2.5 tackles for loss. At 6’2″, 306 pounds, Silvera is a dense, stout interior lineman who’s hard to move in run defense. He also has some explosiveness getting to the contact point. He and Walker may cross paths multiple times on Saturday. It’ll be up to Walker to make him miss or make him pay.

Ever since a 2019 campaign that saw him log 2 interceptions and 5 pass deflections, Xavier Henderson has been viewed as a high-upside prospect. Amidst coaching turmoil, however, he’s never been able to reach that potential. In 2021, that may be changing.

Henderson already has 17 tackles, 3 tackles for loss, 2 sacks, an interception, and a pass deflection through two games. The highlight of his season thus far was a wicked one-handed interception against Youngstown State — but there should be more highlights to come.

On that interception, Henderson displayed a lot of valuable qualities. At 6’1″, 210 pounds, Henderson has great range and length. But he also followed the quarterback’s eyes, recognized the route, and used his athleticism to make the play. Henderson has the traits to feast on a lesser-armed quarterback like D’Eriq King. Nonetheless, King is savvy, experienced, and can manipulate windows with his mobility. Can he stymy Henderson’s rise?

Cincinnati has been taking care of business so far this season, but their competition hasn’t been very inspiring. The Bearcats cruised through contests against Miami (OH) and Murray State, but Big Ten opponent Indiana is a couple of tiers up from that level. What college football prospects deserve attention in this Week 3 showcase? Can Cincinnati get a crucial Power Five win?

Ahmad Gardner has long been one of the more highly-regarded cornerback prospects in the 2022 class, and nothing’s changed so far this season. Gardner remains a tough player to throw at with his length, fluidity, awareness, and playmaking ability. The 6’2″ cornerback will face a formidable foe in Indiana WR Ty Fryfogle.

Fryfogle is an intriguing matchup for Gardner. Both players are fairly big-bodied for their positional designations, with Fryfogle carrying a slight edge on the scale. He’s not overly twitchy, but he has good contested-catch ability and body control when he needs to contort for the ball. Gardner’s length may pose a challenge for Fryfogle, but whenever two prospects with these size profiles face off, there’s always going to be competition.

So far, in 2021, Desmond Ridder has displayed improvement. The 2022 QB prospect was viewed as a high-upside player with a need for refinement heading into the year. His accuracy issues were particularly pressing, but early on, Ridder has looked sharp. He’s more in-sync working in structure, and his athleticism and arm continue to pop.

That said, Ridder hasn’t faced a defense like Indiana’s yet. That’s not to say that the Hoosiers’ defense is elite, but there are some notable players. In the secondary, Jaylin Williams, Tiawan Mullen, Marcelino McCrary-Ball, and Raheem Layne all have histories of production.

At the unit’s center, linebacker Micah McFadden is a consistent playmaker with good instincts and play strength. Cam Jones also provides a threat. The Hoosiers will pose an extra challenge for Ridder, but it’ll be good for his stock if he can get the best of them.

Of all the college football teams in Week 3, Notre Dame is one of the highest on the “upset alert” list. That’s due in part to their matchup. Purdue has been strong to start the season and feature a dangerous passing attack led by Jack Plummer and David Bell. Additionally, Notre Dame hasn’t been overwhelmingly solid, coming off a close win against the Toledo Rockets. Can they ride their top-level college football prospects and stay undefeated?

At this point, we all know who Kyle Hamilton is. He’s one of the best prospects in college football, if not the best. He’s a rangy, dynamic playmaker who has a penchant for disrupting opposing offenses wherever he’s lined up. As inconsistent as Notre Dame has been to start the year, Hamilton has been anything but. That’s why it’ll be up to Purdue’s Bell to keep the Boilermakers’ production steady.

Consistently ranked with the top wide receivers in the 2022 NFL Draft, Bell has been hot to start the year. Through two games, the Purdue receiver has 14 catches for 255 yards and 3 touchdowns. He’s widely known to be an excellent contested-catch threat at 6’2″, 205 pounds, but he’s also flashed good run-after-catch ability. With his well-rounded skill set, Bell can be a catalyst for Purdue’s passing offense on Saturday.

Notre Dame’s offensive line has some notable name talent, but the Fighting Irish’s front unit hasn’t been as consistent as expected to start the year. Jarrett Patterson, Cain Madden, and Josh Lugg are all eligible prospects on the draft stage. Yet, a player like George Karlaftis can effectively extinguish any excitement around their names.

After missing most of the 2020 season with an injury, Karlaftis is off to a strong start in 2021. At 6’4″, 275 pounds, Karlaftis is built like a power rusher, and he has impressive strength at the point of attack. But beyond that, Karlaftis couples his heavy hands with burst and urgency. He can cause disruption from multiple alignments. Thus, several Notre Dame linemen may be liable for keeping Karlaftis under wraps on Saturday.

Our final highlighted Week 3 college football matchup features the Auburn Tigers and the Penn State Nittany Lions. Penn State is currently in PFN’s Top 25, while Auburn could be a team on the rise with a win on Saturday. There’s a lot of talent on both sides of the ball, but what are the matchups that demand the most attention?

Rasheed Walker is an offensive tackle prospect with high-level traits, but he’s been up and down to start the 2021 season. The Penn State blocker has had struggles with timing and balance. The hope is that he can find his rhythm down the stretch because he has the athleticism and length to succeed. Regardless, his battle against Auburn won’t be easy.

Auburn has a stifling pass-rushing unit, led by three draft-eligible players in Colby Wooden, Derick Hall, and T.D. Moultry. Wooden is the most enticing prospect. He’s built around 6’5″, 278 pounds, with an uncommon mix of explosiveness, length, and positional flexibility. Hall, meanwhile, is a more traditional edge, with a similarly enticing physical profile. In pass-rushing situations, these guys come in hot. It’ll be up to Walker to keep Sean Clifford clean.

I’ve been on the record saying that Bo Nix has the physical traits to be an early-round pick. He’s also shown some flashes in structure to suggest that he can be a viable passer. The question with Nix has always been consistency reacting against pressure. Good pressure can make good coverage great, and Nix has struggled with volatility against that combination.

Nix has played well so far this season, but Week 3 will be his first true test. The Nittany Lions have a formidable front led by talents like PJ Mustipher, Arnold Ebiketie, and Brandon Smith. But their secondary is even more loaded. Joey Porter Jr., Tariq Castro-Fields, and Jaquan Brisker are all next-level college football prospects who’ve made plays this year. Can Nix elevate his game against this kind of talent? That’ll be a big hurdle for his stock.

Matchups to watch in Week 3