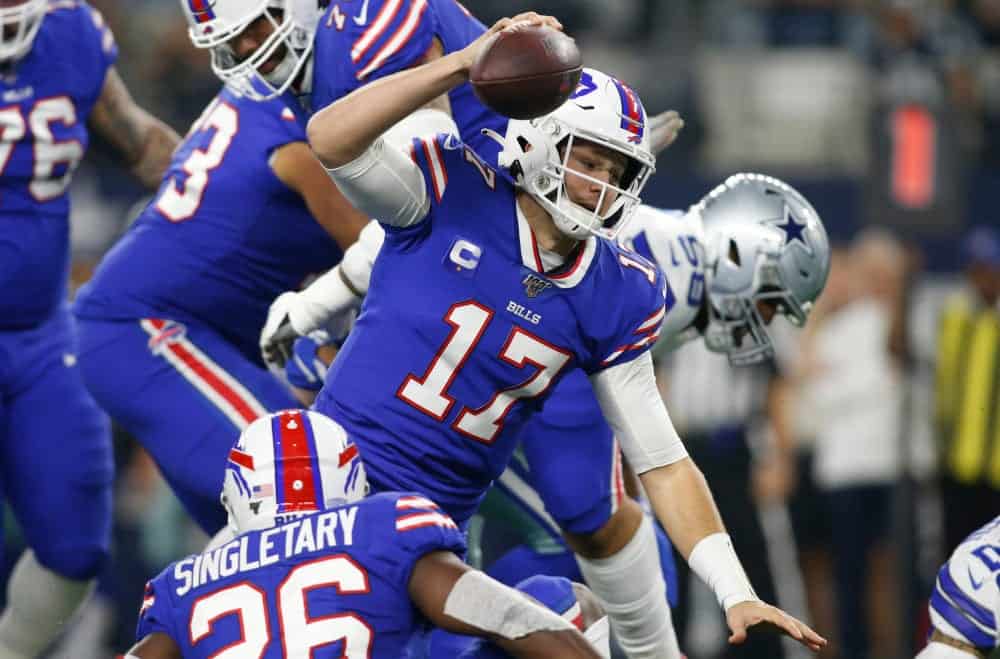 Who would have thought the AFC East would still be hanging in the balance come Week 16. This game was supposed to be more about the New England Patriots and home-field advantage than a scrap for the division. However, the Buffalo Bills have fought hard this season and currently sit just one game behind the Patriots for the division.

Judging from this week’s game odds, it looks like they still need some help in Week 17, but a win in New England would be an absolutely massive statement for the Bills. Equally, the Patriots desperately need to build on their momentum from last week. A win over the playoff-bound Bills would certainly be good for morale in Gillette Stadium. Let’s take a look at our team’s picks for this Week 16 NFL clash between the Bills and Patriots.

Unsurprisingly, given the way the Patriots have been playing, the Bills have been seeing the majority of the bets in this one. However, the line has not budged from 6.5 due to the money split on the teams being close to 50/50. The total is also seeing a 60/40 split towards the under, and at one point, this line has dipped as low as 36.5 in the past day or so. It has now rebounded to the 37-point mark, but we may see further movement in the build-up to the game.

Want more betting analysis? Click for the latest from the PFN Betting Crew.

This game is a tough one to call. I am expecting a low scoring slug-fest type game that comes down to the wire. Those sorts of games tend to suit betting the team getting the points and the under. However, with 37.5 being so low, the best bet here might be a 6-or-6.5 point tease on the Bills to stay within 12 and the total to be below the 43.5-point mark.

Another interesting bet is Josh Allen to find the end zone. The Bills quarterback has been likened to a full-back by some analysts, and we have already seen the Patriots struggle against one quarterback that can run the ball. This Patriots defense is great, but they do not have anyone big enough and quick enough to stop Allen if the Bills call his number at the goal line.

This is a tough spot for Buffalo coming off a huge Sunday Night win in Pittsburgh that clinched a postseason spot. As a reward, they get to travel to the friendly confines of Foxborough on a Saturday. With the Bills on short rest, I’m thinking Pats 1Q has tremendous value at +105. I thought about teasing the Patriots down to a pick for the full game and then combining with the 49ers, but I still have PTSD from a similar teaser that Dallas destroyed me on Thanksgiving.

Tom Brady and company started slowly in Cincinnati last week and I suspect Bill Belichick will have the Pats primed and ready for Buffalo in Week 16. I’ll grab the Patriots for 1U here and also look to “live bet” New England in-game if the opportunity presents itself.

Earlier this season, New England was a 7.5 favorite at Buffalo and won by 6, with a final of 16-10. One of the scores was a blocked punt for a TD. These are teams that know each other. Division rivals with the AFC East crown on the line. These teams will be prepared — with the possibility that one or both teams play tight initially as they jab each other and look for weaknesses.

In the first game, only 10 combined points after halftime, and none in the 4th quarter. Both teams will make solid defensive adjustments at halftime, even if there are some gimmicky scores in the 1st half with trick plays or fluky scores like turnovers.

New England scored 34 points against the Bengals. In the five games before that, they scored 20, 17, 13, 22, and 16. Those aren’t scores of a favorite carrying the total, and I don’t see Buffalo blowing out New England in Foxborough and/or scoring lots of points. In the first game, Buffalo held NE to 224 total yards of offense. Classic defensive battle in the cold.

This Saturday, the surprising 10-3 Buffalo Bills will be heading to Gillette Stadium to take on division rival New England Patriots. The Patriots are laying 6.5 points at home with an incredibly low 37 total. The Bills defense dominated the Patriots offense in their first meeting this season, but a blocked punt changed the game as the Patriots went on to win 16-10. Turnovers by the Bills certainly didn’t help.

The Patriots offense wasn’t impressive against the Bengals, again feasting off turnovers, and they’ve now gained less than 300 yards in four of their last five games. The Patriots lead the league in turnovers this year, averaging nearly two per game. Their defense has kept them alive while the offense has struggled. On the other side of the ball, Buffalo’s offense has been good but far from impressive. If they want to win this game, Josh Allen will need to limit his mistakes.

Betting against New England at home in December is not a very good choice. Both these teams will be incredibly motivated, with the number one seed in the AFC on the line for the Patriots and the AFC East for Buffalo. With two elite defenses, I expect a low scoring affair. If Allen takes care of the ball, I can see them keeping it close. My lean here is to Buffalo +6.5. Maybe this really is the end of the Tom Brady and Bill Belichick stranglehold on the NFL.”