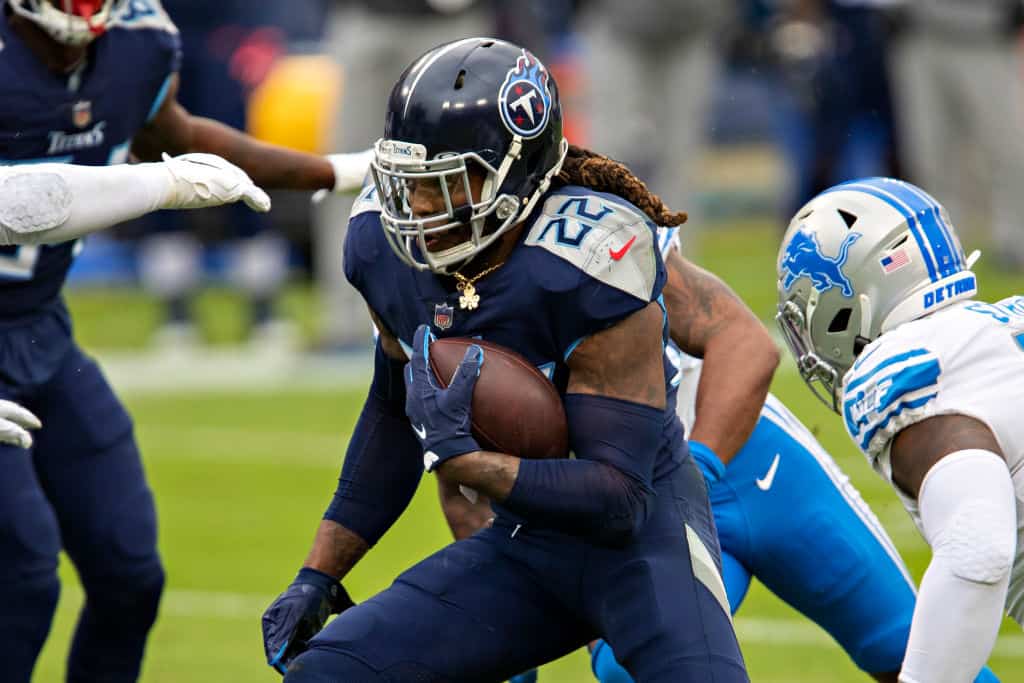 NASHVILLE, TENNESSEE - Running back Derrick Henry #22 of the Tennessee Titans runs the ball during a game against the Detroit Lions at Nissan Stadium on December 20, 2020 in Nashville, Tennessee. The Titans defeated the Lions 46-25. (Photo by Wesley Hitt/Getty Images)
What's in this article? Click to show
Running back injuries hit hard in Week 16
Top 5 running backs in fantasy football for Week 16
Fantasy RB rankings for Week 16: Miles Sanders rounds out Tier 1
Want more fantasy football analysis and news?

It already looks as if it will be a race for second place in the Week 16 fantasy RB rankings after Alvin Kamara’s six-touchdown performance. These rankings have been updated, though. Any players from the Saints, Vikings, Buccaneers, Lions, 49ers, Cardinals, Raiders, and Dolphins have been removed now that they have played. Our rankings are here to help give you the best chance of victory in your fantasy football championship, highlighting RB busts, must starts, and sleepers from the remaining teams.

Some high-profile running backs miss out this week due to injury, and their teams will have to turn to their backups to replace them.

Christian McCaffrey has been out for much of the season, and Mike Davis will handle the workload again. James Robinson’s rushing attempts could fall to Devine Ozigbo, with Dare Ogunbowale seeing opportunities in the passing game. Joe Mixon will miss out again, giving another opportunity to Giovani Bernard. Clyde Edwards-Helaire’s injury allows former fantasy RB1 Le’Veon Bell to show that he’s still capable of producing.

Ezekiel Elliott is also expected to play, as is Antonio Gibson, but both are game-time decisions. He’s yet to practice fully this week, so he has been left off the Week 16 fantasy RB rankings. If he is active, he would slot in the ranking in place of J.D. McKissic, with McKissic sliding down the rankings.

As always, make sure that you check the injury reports for updates before the games.

Note: Please keep in mind that these are PPR RB rankings. PPR in fantasy means that a running back gets an additional full point for each reception. This can play a big factor when deciding which players to put into your lineups and makes volume all that much more important. Schematically, some defenses are better than others at stopping RBs in the passing game, and it’s important to note who those teams are.

The David Montgomery revenge tour is full speed ahead. After many (including yours truly) wrote him off, he’s found his feet as the workhorse running back for the Bears. He’s had over 100 total yards and a touchdown in his last four games. Now he’s rewarded with a game against the Jaguars, who have been unable to stop RBs all season.

Aaron Jones had his second-best game of the season in Week 15. He torched the Carolina Panthers for 158 yards and a touchdown. The Titans defense has struggled against running backs this season, and Jones will hope to continue his form.

Nick Chubb has gone over 100 total yards in seven of his 10 games this season. He also has 10 touchdowns in that time. Chubb will never see 100% of the running back touches due to Kareem Hunt’s quality. Still, he’s the lead back for one of the best rushing attacks in the NFL. With so many of the Browns receivers out, he should see plenty of the ball.

Austin Ekeler still cedes more touches to Kalen Ballage than fantasy managers would like. He’s getting healthier each week, though, and the Chargers coaching staff badly needs to win. Putting the ball in the hands of one of their most talented playmakers is a good strategy.

Miles Sanders came back down to Earth a little bit after his Week 14 demolition of the Saints. The volume was still there, though, as he touched the ball 18 times. He was the only Eagles RB to carry against the Cardinals and has a good opportunity to finish the fantasy season in style against the Cowboys.

Offensive line injuries and a tough matchup make Jonathan Taylor a riskier option than others in the top 10. He has had over 95 total yards in his last four games, though, and the Steelers have just allowed Giovani Bernard to finish the week as a top 10 fantasy RB.

Melvin Gordon has had one of the most efficient seasons of his career in terms of yards per carry. Unfortunately, he hasn’t been as involved in the passing game as fantasy managers would like, though. Gordon had two touchdowns a week ago. If he gets similar opportunities against his former team, he could be in for another big week.

David Johnson and Le’Veon Bell should get plenty of carries

David Johnson has 11 receptions in Week 15. Expecting that again is optimistic, given until that point, he had only had 16 all season. That said, it’s clear that the Texans believe he can be a three-down back. The Bengals have performed capably against running backs this season, but they struggle to score points, which means that the running game is always in play.

Le’Veon Bell has an opportunity to get his career back on track against the Falcons this week. With Clyde Edwards-Helaire out injured, Bell will inherit a large workload. The Falcons have recently improved against RBs, but Bell should see plenty of opportunities and could produce in a high-scoring offense.