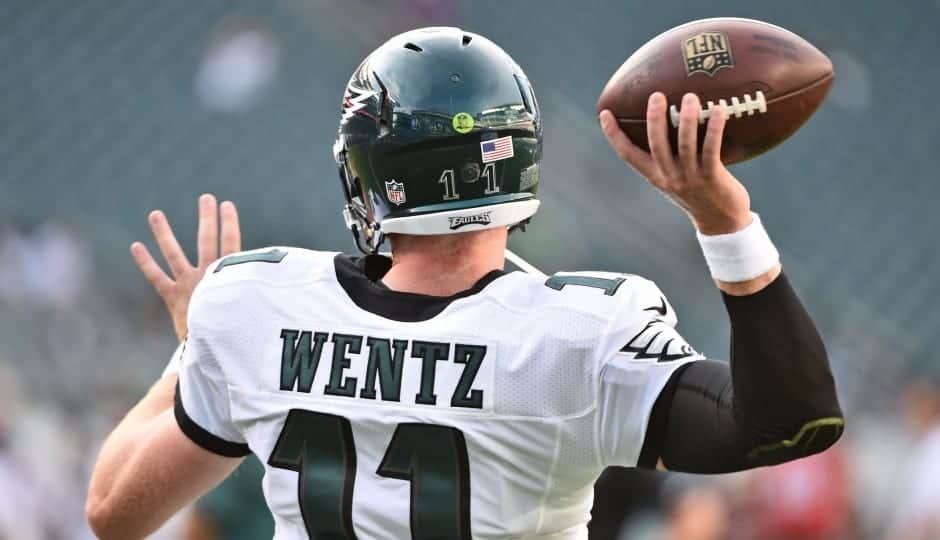 After some fantastic Monday Night Football matchups in the past few weeks, this one will not have people rushing to their sofas ready for kickoff. The 2-10 New York Giants heading to the 5-7 Philadephia Eagles should not have any playoff implications realistically. However, because of the struggles of the NFC East, this game very much as playoff implications. Can Carson Wentz get his team back in position in the playoff race and an outside shot of a Super Bowl? Or will Eli Manning deliver a blow to the hopes of one of his old enemies? Our PFN picks team takes a look at how they think it will go with their Week 14 MNF game picks.

This game has seen some interesting betting patterns. The Giants are actually commanding the majority of the bets against the spread, but the majority of the money has been coming in on the Eagles. That split has meant that this line has not really moved this week, but could move half a point one way or another if we have a little swing in the bets or money. The total has also seen some interesting betting patterns. The under is receiving just over 50% of the bets, but it sees nearly three-quarters of the money. The reason for that pattern? If you carry on reading, you will find out!

“It is rare that I find two prime time articles in a week where I struggle to find a play I like. The problem is that I simply do not trust these teams. The Eagles have been punched in the mouth by bad teams too many times this year, and the Giants are starting Eli Manning.

One thing I am looking for is a statement game by the Eagles offense. The Giants defense is a get well situation for any opposing offense. Alshon Jeffrey came back in a big way last week against Miami, and I expect him to be big again this week. You can find him over 58.5 at -115 this week, which is a line I like against this secondary.”

“This one is simple. Divisional December UNDERs hit at close to 60% the last 15 seasons, and that number increases exponentially when double-digit wind speed is involved. Conveniently, there is a ton of rain and wind in the forecast here, over the next 36 hours or so. Eli Manning is getting the start for the Giants with Danny Dimes dealing with a bum ankle. Eli’s propensity for the Pick-Six is the only thing giving me pause with regards to this total, but in the end, if you can grab the Under at anything above 44.5, it’s probably worth it.”