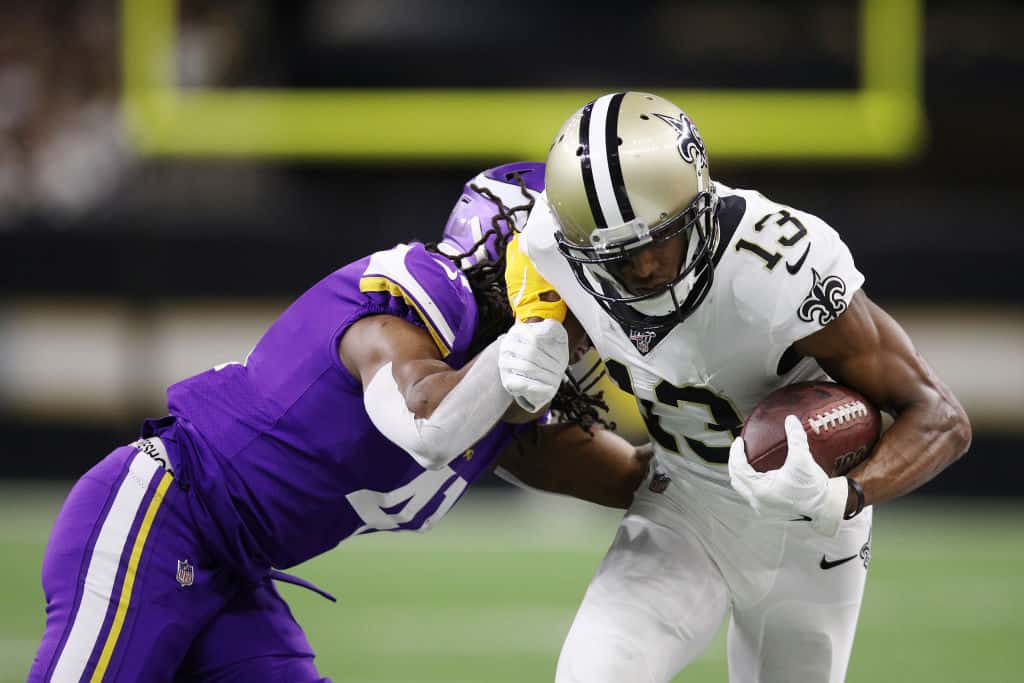 NEW ORLEANS, LOUISIANA - JANUARY 05: Anthony Harris #41 of the Minnesota Vikings attempts to tackle Michael Thomas #13 of the New Orleans Saints during the first half in the NFC Wild Card Playoff game at Mercedes Benz Superdome on January 05, 2020 in New Orleans, Louisiana. (Photo by Chris Graythen/Getty Images)
What's in this article? Click to show
What to keep in mind heading into Week 13 and searching for the best fantasy football wide receiver
Fantasy WR Rankings Week 13: Sleepers, must starts, busts
The best of the rest
Want more fantasy football analysis and news?

Complications abound in your quest to find the best fantasy football wide receiver this week, but thankfully, our Week 13 fantasy WR rankings are here to hold your hand and guide you through this minefield of madness.

The first thing to be aware of is the extra deliberation time that you have before you set your lineup this week.

Due to the Baltimore Ravens and Pittsburgh Steelers having their Week 12 matchup delayed until Tuesday night, the Ravens will now play their clash with the Dallas Cowboys on Monday afternoon rather than opening Week 13 on Thursday Night Football.

The Ravens defense has been a nightmare for fantasy football wide receivers, and Amari Cooper, CeeDee Lamb, and Michael Gallup should be treated with caution.

As always, you will need to skillfully negotiate the bye week. This week sees the Carolina Panthers and Tampa Bay Buccaneers having a well-deserved rest and takes several players out of our Week 13 fantasy WR rankings. Robby Anderson (159.1), DJ Moore (156.4), and Mike Evans (155.1) are all high scoring fantasy football wide receivers that you will need to replace in your starting line up in Week 13.

Finally, make sure you keep an eye on the injury report. Some big-name fantasy football wide receivers were ruled out in Week 12, including DJ Chark, Kenny Golladay, and Adam Thielen. Golladay has missed multiple weeks this NFL season and won’t figure in these Week 13 fantasy WR rankings, but Theilen should return from the reserve list.

Adams remains the must-have fantasy football wide receiver in the 2020 NFL season. He leads the league in points per game, total points, and his 847 yards from just eight games is a better yards per game statistic better than any player you will find in these Week 13 fantasy WR rankings. Although he doesn’t have the easiest matchup this week, the Philadelphia Eagles defense is still allowing 22.3 points per game, and Adams should comfortably exceed that mark.

Although Hill doesn’t have as many receptions as some of the players in these Week 13 fantasy WR rankings, he more than makes up for that with touchdowns. Hill has the second most touchdowns in the NFL, which has powered him to the second-highest scoring fantasy football wide receiver in 2020. The Denver Broncos are allowing 23 fantasy points per game this season, and Hill helped himself to 17.5 in the earlier encounter between the two sides.

As the focal point of the New Orleans Saints offense for multiple years, Thomas has been a first-round fantasy football pick year in, year out. After missing much of 2020, he has become something of a forgotten man. However, he returned to fantasy football wide receiver relevance in the first matchup against the Atlanta Falcons with nine receptions, 104 receiving yards, and 19.4 fantasy points. I expect a better return on your investment in his third matchup with Taysom Hill, as Thomas becomes the go-to guy for Hill.

As one of the most targeted wide receivers in the NFL, Diggs will continue to be a valuable fantasy football wide receiver. He has the fifth-most fantasy points per game and is third in the NFL for receiving yards at the time of writing. Diggs has the highest score in Phillip Caldwell’s Fantasy Football Consistency Score, illustrating his ability to consistently score a high number of points for your fantasy team. In Week 13, he faces a 49ers defense that has allowed 12 touchdowns to wide receivers and is averaging 22.2 points per game to the position.

With Thielen set to return from injured reserve following a positive test, you should slide him straight into your fantasy football lineup. The NFL touchdown leader has a great matchup against a Jacksonville Jaguars defense that has allowed 26.5 points per game and also 11 touchdowns this year to the wide receiver position. Despite the emergence of rookie Justin Jefferson, Thielen has the eighth-most fantasy points per game in the NFL this year.

Choosing which Seattle Seahawks wide receiver to start each week is one of the most difficult fantasy football decisions around. Lockett gets the advantage in these Week 13 fantasy WR rankings as his higher volume of targets is particularly important in PPR leagues. He just shades teammate D.K. Metcalf with 19 points per game versus 18.6. The New York Giants have allowed just one touchdown per game to wide receivers but have allowed the 10th-most catches, which should favor Lockett over Metcalf this week.

The Chicago Bears quarterback situation remains a handicap for Robinson, but he is still averaging 15.5 fantasy points per game and is one of the most targeted wide receivers in the NFL. Robinson’s matchup with the Detroit Lions earns him a place in the top 10 of the Week 13 fantasy WR rankings. The Lions have allowed 25.6 points per game and have given up the third-most receptions to the wide receiver position. They were toasted by Houston Texans wide receiver Will Fuller in Thursday’s Thanksgiving games.

8. Terry McLaurin, WAS vs. PIT

The Pittsburgh Steelers have one of the best run defenses in the NFL, which should help negate the impact of rookie phenom Antonio Gibson, forcing the Washington Football Team to revert to targeting McLaurin in the passing game. The Steelers have allowed 23.6 points to fantasy football wide receivers, and McLaurin is averaging 16.8 points per game. His consistency score of 5.24 makes him the seventh most consistently high scoring fantasy football wide receiver in the NFL this season.

By the time the Seahawks face the Giants, Metcalf could be in double-digit touchdowns for the season. This production makes him a valuable asset for fantasy football managers, but he features below teammate Lockett in these Week 13 fantasy WR rankings as the less targeted of the two Seattle pass catchers.

As the most targeted wide receiver in the NFL, Allen is almost invaluable in PPR leagues, especially with Justin Herbert impressing in his rookie season. Allen has the third-most points per game and faces a New England Patriots defense that has given up double-digit touchdowns and 22.9 points per game to fantasy football wide receivers.