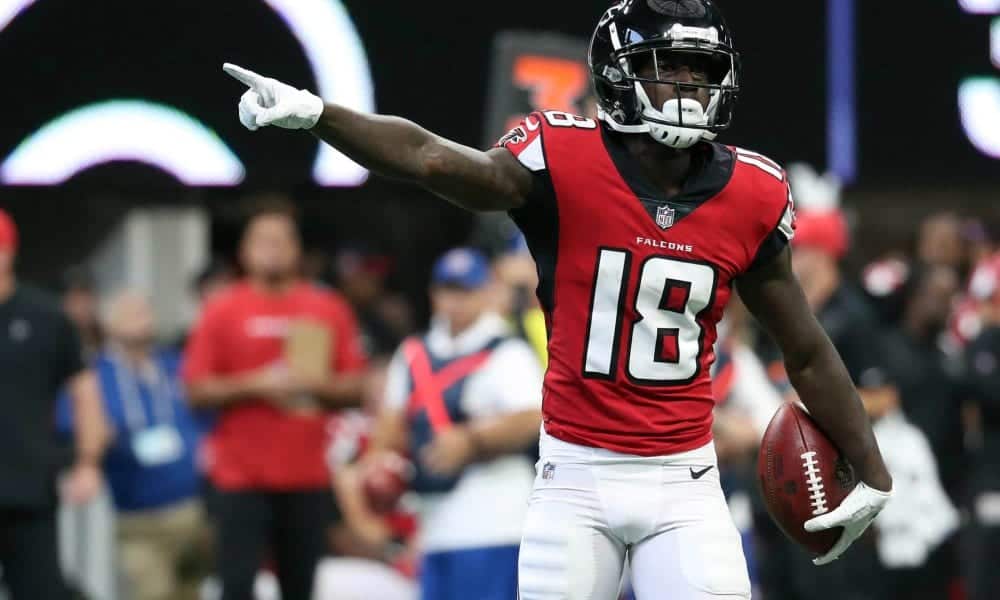 Week 11 saw me essentially break even. Josh Jacobs was a few yards shy of me hitting all of this player props, while Jameis Winston did Jameis Winston things, throwing an interception on the Saints one-yard line when he had 1st and goal to cost us their team total over bet. I didn’t lose money, though, so I can’t complain. You can read a recap of all of our weeks in the weekly Sheep Report. If you want to read my thoughts on the picks I got correct, you can go back to my Week 11 article. As always, before we get to the 2019 Week 12 picks, and why the Buccaneers and Falcons are the best bet for an over, I’ll recap my misses and see if there is anything we can learn.

I never like to blame my losses on bad beats, but this was kind of a bad beat. The Buccaneers had 1st and goal on the one and couldn’t deliver. I don’t feel wrong about the (+6) as I thought it was a value play at that point. Maybe I shouldn’t continue to bet on Jameis Winston. Spoiler alert: I’m not learning my lesson this week. More on that below.

Jacobs was benched for two series because he fumbled and ended up eight yards short of cashing all my props on him. Derek Carr also had a two-yard passing touchdown and a three-yard rushing touchdown. Not complaining, just stating what happened. The props were still profitable, but I could’ve used the extra eight yards for my weekly total.

I’ll be conscience of taking D.J. Moore touchdown props in the future, as he only has three so far in his career. He doesn’t seem to get the kind of targets conducive to scoring touchdowns either.

I don’t have data to back this up, but I suspect books are comfortable taking a stand with any spread they leave within optimal teaser range. Are they unplayable? No, because had I swapped the Jaguars for the Jets, my teaser would have cashed. It’s just something to keep in mind for the future.

Sometimes in NFL betting, the value will make you want to vomit. That is the case here with the Bengals Week 12 spread against the Pittsburgh Steelers.

The Bengals have been trash this year. Cordy Glenn hasn’t played all year, and they have resorted to starting Ryan Finley at quarterback, I’m not going to try and convince you that they are in any way good. However, this number is off to me. Consider last week they were (+10) point underdogs at the Oakland Raiders. If you take away two points for the Raiders home field advantage and another point for the Bengals home-field, the Raiders would be seven-point favorites in Cincinnati this week. That is saying the Raiders and Steelers are equal teams. Is that the case? Not according to the yards per play model we use. According to the model, the Raiders are (1.5) points better than the Steelers. 1.5 points doesn’t sound like a lot, but considering we got a seven-point spread, it is significant.

I suggested a juiced (+7), which reads more like (+6.5) (-110). I’m ok, however, paying the little extra to get the key number of 7. The Steelers will be missing Maurkice Pouncey, as well as JuJu Smith-Schuster and James Conner. Last Thursday night revealed Mason Rudolph for what he truly is (in more ways than one): A drastically below average QB. Having said that, Ryan Finely has been bad as well.

While the Bengals defense isn’t great, they did limit Raiders offense to 17 points last week. I don’t see how the Steelers are going to score in this environment. Losing Pouncey against Geno Atkins is not ideal. I expect this to be an ugly, AFC North battle where points will be at a premium. The Steelers should have trouble scoring, which will keep this game within reach for the Bengals. If you don’t want to bet on Zac Taylor and Finley, I like the Steelers team total under 23.5, as well, as part of my week 12 picks.

After the Jets Week 8 loss to the Jacksonville Jaguars, Sam Darnold approached Adam Gase to discuss changes within the offense. Well, it has paid dividends so far. In that time, they have played the Dolphins (32nd in pass defense efficiency), Giants (28th), and Washington (26th). Soft competition, but the Jets have ranked 10th in both passing success rate and explosive passing success rate, according to Sharp Football Stats. The Raiders pass defense ranks 23rd in season-long pass defense efficiency.

The way to attack the Raiders is through the air, and the Jets have been doing that quite well lately. While they have favored the run slightly more during that stretch, I don’t expect them to have success against the Raiders defensive line. Headlined by star rookie Maxx Crosby, they rank 9th in Football Outsiders adjusted line yards.

As good as the Raiders run defense has been, the Jets have the top run defense in the league this year. They rank first in adjusted line yards and should be able to stop Josh Jacobs and the silver and black rushing attack. Jon Gruden will have to put the game in the hands of Derek Carr. All of that is just a fancy way of saying there will be more pass attempts in this game. As we know, more passing means more plays, which are conducive to the over. Oakland ranks 3rd in the NFL in passing success rate, including 8th in explosive passing success rate on the year. While the Jets have star defensive back, Jamal Adams, they rank a middling 15th in passing success rate and 21st in explosive passing success rate on defense. Even those average numbers are inflated by their recent stretch of inept passing offenses. I expect Carr and his wide receivers to have success beating this defense through the air.

The total has been at 46.5 all week, meaning big-time players have not taken a stance on it. 47 is a key number, and I think it should probably be above that, so I like taking the value at 46.5. Their pace isn’t where I’d want it to be for an over, but I still like it enough to include it in my week 12 picks.

My weekly masochistic segment where I justify a bet on Jameis Winston while also weeping in my pillow, counting all of the units I have lost betting on him and head coach Bruce Arians. I’m not taking them on the spread or money line this week, but they do need to score points for me. Over 51.5 is one of my favorite week 12 picks.

The total opened at 54.5 and has since been bet down to 51.5. That might be due to the recent resurgence of the Atlanta defense, but I’m still not a believer in it. The data says there is something there, but it could also just be noise in a two-week sample. It might also say something about Drew Brees’s arm, though that is a topic for another day.

The Atlanta defense ranks 27th on the year in passing defense efficiency, including 23rd in explosive passing defense. Tampa Bay’s ranks are not inspiring, but they have gone up against the 9th hardest schedule of passing defenses up to this point. The closest units, in terms of pass defense, the Buccaneers have faced have yielded 30 points (Cardinals) and 31 points (Giants). I don’t need to tell you how Matt Ryan, Julio Jones, and Calvin Ridley will tear apart the Tampa Bay Buccaneers pass defense.

I focused on the passing game for both offenses because these are two of the most pass-heavy teams in the league. Atlanta is first in passing rate (68%), while Tampa Bay is 5th (64%). That has, however, changed drastically for Atlanta the past three weeks. They have a pass rate of just 54%, 27th in the league. I don’t expect that to be the case in this game, however, given the state of the Buccaneers defense. They’re elite against the run and dreadful against the pass. In that same time frame, Tampa Bay has thrown the ball at a 72% clip, 2nd in the league.

These two teams play at one of the fastest paces in the league, as well. The Falcons ranks 8th in total pace, 2nd in situation neutral while Tampa Bay ranks 6th and 15th, respectively. Last but not least, this game is in a dome, which, as we all know, is more conducive to scoring. We have a fast-paced game, with two good pass-heavy teams against bad pass defenses in a dome. I’m not sure what else you need for an over that is barely priced above the top key number of 51.

There is market resistance, as Pinnacle and Bookmaker are showing 51, with juice to the over. You may be able to wait to get this at a better number, but if not, I’m comfortable with 51.5. Bovada also has the Tampa Bay total touchdown line set at just 2.5, with a little juice (-115) to the over. I’m making that an official play, as well. As far as player props, I don’t see any value in the prices on Ryan and Winston but do like Ridley’s over yardage prop at BetOnline for one of my week 12 picks. You can get 78+ receiving yards at (+110). Be on the lookout for scoring props in this game as well. If you can get Mike Evans, Julio Jones, Calvin Ridley, or Chris Godwin at near (-110) odds to score, I don’t mind that bet as well.

Other than that, that’s it for your 2019 NFL Week 12 game picks. Good luck, and let’s hope we can turn a profit this week. Be sure to follow the PFN All-Access Twitter account (@PFN365AA) for live updates, Ben Rolfe’s totals article, Chris Smith’s article, Jason Sarney’s player props article, and listen to the Against the Spread podcast with Jason Sarney and Ryan Gosling for more NFL picks!

Click to view the running list of our bets for this week and the 2020 NFL Season. Be sure to bookmark that page and visit it often throughout the week to stay updated on our latest moves.
In this article:Atlanta Falcons, calvin ridley, Cincinnati Bengals, Featured, featured, Jameis Winston, New York Jets, Oakland Raiders, Pittsburgh Steelers, Tampa Bay Buccaneers