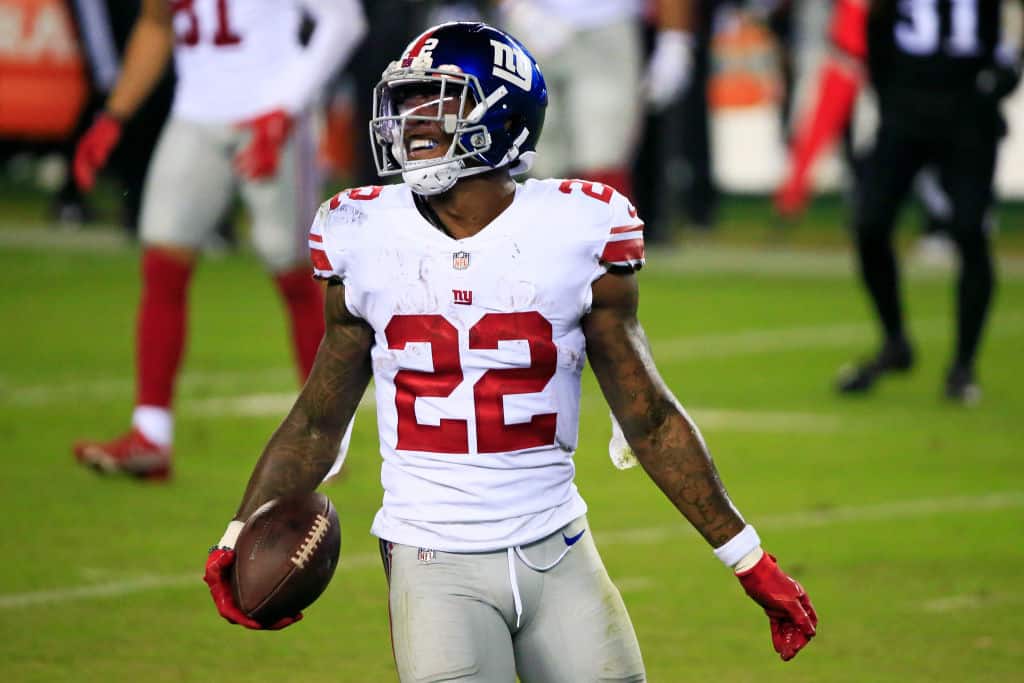 PHILADELPHIA, PA - OCTOBER 22: Wayne Gallman #22 of the New York Giants reacts during the fourth quarter at Lincoln Financial Field on October 22, 2020 in Philadelphia, Pennsylvania. The Eagles defeated the Giants 22-21. (Photo by Corey Perrine/Getty Images)
What's in this article? Click to show
Once he got the starting job, Wayne Gallman has been one of the hottest RBs in fantasy
Wayne Gallman’s mid-season surge could prove to be lucrative
What is the fantasy outlook for Wayne Gallman in Week 14?
Want more fantasy football analysis and news?

It’s Week 14, and the fantasy football playoffs are off and running, just like fantasy managers hope New York Giants RB Wayne Gallman will do on Sunday. Since taking over the Giants’ backfield, Gallman has been a tremendous value for those lucky enough to scoop him up. Can he retain that same value in Week 14 against the Arizona Cardinals?

Once he got the starting job, Wayne Gallman has been one of the hottest RBs in fantasy

2020 is weird. No one is going to argue this. Saquon Barkley was supposed to have a great season after closing 2019 off so well. Unfortunately, that’s not what happened at all. Barkley was lost after Week 2 when he tore his ACL.

After trying several running backs, including signing Devonta Freeman, none were able to succeed. That is until Wayne Gallman was handed the keys to the castle as the starting running back.

Did you know that since Week 7, Wayne Gallman is the RB6 in fantasy? Honestly, I didn’t even realize this until recently — he’s that unassuming. During this time frame, he has averaged 15.8 PPR points per game. That’s more than Aaron Jones (15.7).

He has never finished worse than RB18 (twice) and has four top 12 finishes in this six-game stretch.

It hasn’t been for cupcake competition either. This run includes two matchups with the Eagles, one with the Buccaneers, and one with Washington. Two of which (Washington and Tampa Bay) are in the top 10 in fewest rushing yards allowed, with the Buccaneers sitting atop the run defense throne in the NFL.

Since the bye week, Gallman has had back-to-back season-high games

In Week 12, he was a workhorse and had 25+ touches. He saw 24 attempts against the Bengals for 94 yards and added three catches with a touchdown. Clearly, he wasn’t worn down because he had an even better game last week.

Wayne Gallman led the Giants into one of the most surprising upsets of the year. They knocked off the Seahawks in Seattle thanks to what he did on the ground. He rushed for 135 yards on 16 carries, including a beautiful 60-yard run. His 135 yards rushing were the highest for anyone in the NFL in Week 13.

That’s a grand total of 229 yards on 40 carries over the last two games (5.7 yards per carry). It’s led to a more balanced offensive attack. The time of possession is helping the defense stay fresh.

Shockingly, the box score stats could have been even more prolific for Gallman. In Week 13, he lost out on two touchdowns to Alfred Morris. Yes, you read that right, Alfred Morris. One came on a four-yard run, and the other was a six-yard pass. It’s even more frustrating when you learn that it was Morris’ first-ever receiving touchdown. I mean, good for him, I guess.

Wayne Gallman’s mid-season surge could prove to be lucrative

His six rushing touchdowns are already double what he had in his career. And if he keeps on this game pace, Gallman is going to double his career rushing totals.

What makes this interesting is that Gallman is set to be a free agent after this season. Coming out of Clemson after rushing for 3,416 yards and 34 touchdowns, the Giants took him in the fourth round of the 2017 NFL Draft.

Unfortunately for him, they followed it up the next year by selecting some guy named Saquon Barkley in 2018.

The NFL is moving towards an attitude where they don’t want a high investment in running backs, as evidenced by the Chiefs landing of Clyde Edwards-Helaire at the 32nd pick — the first RB off the board.

Wayne Gallman could either be a cheap starting option for a team or be a fantastic RB2. With committee approaches being the norm, Gallman might end up somewhere and be a thorn in the side of whatever lead running back we are banking on for fantasy in 2021.

What is the fantasy outlook for Wayne Gallman in Week 14?

While you might think that Cam Akers’ emergence happened this week, it started last week against the same Arizona Cardinals that Wayne Gallman is about to face. In Week 13, the Cardinals gave up 72 yards to Akers and 121 to the running backs as a whole. They surrendered 35.5 fantasy points to Akers and the collective Rams backfield while allowing three rushing touchdowns.

Since Week 11, they’ve allowed 306 yards on 67 carries (4.57 avg) with five rushing touchdowns to the position. In contrast, the Cardinals currently sit in the top 10 of most stingy defenses against RBs according to Phil Caldwell’s Defensive Points Allowed Consistency Score (DPACS) metric.

DPACS has the Cardinals’ defense against RBs in the top 10 in both standard scoring and PPR formats. However, considering the recency effect of the Cardinals’ run defense, I would be hard-pressed not to recommend Gallman this week. High floor, high ceiling. That’s the type of player you want in your starting lineup for the fantasy playoffs.

The Giants are coming off a season-high 190 yards on 31 carries (6.13 yards per rush). Week 13 had the Giants exceed 100 rushing yards for the seventh consecutive game, their longest streak since they did it for nine consecutive games in 2010. The offensive line is creating more push and movement up front.

Even if Daniel Jones returns this week, which is questionable, he won’t be the mobile version we are accustomed to seeing. Right now, this team is built on running behind one of the better rushing offensive lines out there. The commitment to the run, recent success, and poor play by the Cardinals’ defense make Wayne Gallman a solid RB2 for fantasy in Week 14.