The Washington Redskins traded with the Denver Broncos for veteran quarterback Case Keenum. How will he impact the team’s offensive production?

On Thursday, the National Football League had an influential trade. No, not one involving a petulant receiver moving to the desolate regions of New York. This trade was a bit more practical. The Washington Redskins acquired Case Keenum from the Denver Broncos in a deal that involved swapped draft picks. Keenum spent just one year with Denver after receiving a controversial contract.

Last season, Washington traded for Alex Smith from the Kansas City Chiefs and signed him to a long term deal with a large portion guaranteed for injury, about $71 million. This is noteworthy because Smith suffered a gruesome injury in a Week 11 game against the Houston Texans that ended his season. Officially he suffered a compound fracture in his leg, more specifically a spiral fracture, meaning the bone was broken due to rotational force.

At age 34, Smith faces a lengthy recovery process. To make matters worse, after numerous surgeries, his leg became infected. This led to more surgery. There are doubts Smith can ever make it back to the field of play.

Salary cap wise, Washington would be on the hook for $20.3 million against the cap if Smith does not play this year. This leaves them looking for a cost-effective solution to address the position. With Colt McCoy set to earn just over $3 million this season, the best solution seemed to be the draft.

Then John Elway stepped in to do what he seems to do best as an executive – save the day for another team.

Denver agreed to finance a portion of the Keenum contract and Washington will now only be on the hook for just over $3 million, essentially what they’re paying McCoy. The question remains, however. How big is the drop off between Smith and Keenum?

The answer lies in PFN’s Offensive Share Metric. With OSM we can see just how much Smith contributed to the success of his offense, and the same with Keenum.

Smith ranked 6th among all quarterbacks in OSM. Out of the 39 quarterbacks measured, Alex Smith was the sixth most responsible for his team’s success, relative to the other skill position players on his team. He was neutral in completion differential. He forced aggressive throws due to lack of separation from receivers.

The Washington offense finished ranked 28th in the league, but they declined steadily after the injury and were ranked higher through Week 11, although by a small amount. So Smith’s OSM indicates that he was carrying a lot of the load.

Keenum, on the other hand, ranked 25th, with the 19th ranked offense. His OSM rating indicates that he was likely inhibiting the Denver offense. He was especially poor in completion percentage differential (-1.2). This was glaring because he only needed to be aggressive 16% of the time.

I still believe Washington addresses the QB position in the draft.  No one believes Keenum is the long term answer. I would also expect a significant drop off in play. Washington should beef up the run game to help Keenum. This will set-up the play-action passing game where he is most comfortable. However, at pick 15, I’m not sure there will be a QB worth taking. Possibly Drew Lock, but he struggles with accuracy just as Keenum does.

Yes, Washington made a trade for a quarterback, but I cannot imagine this is the last move. It will be very interesting to see how this situation unfolds. This was likely only the first domino. 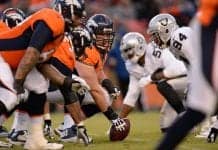 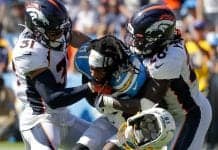 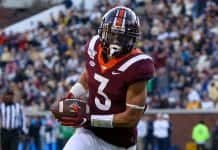 Reviewing the Denver Broncos selections in Cummings’ 2021 3-round NFL Mock... 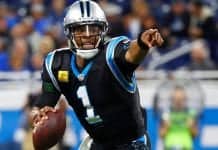 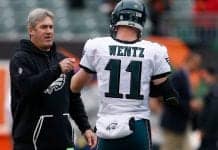 The Denver Broncos and Las Vegas Raiders rivalry is one of the more storied ones across the National Football League and one that isn't...
View Post
Denver Broncos

The Denver Broncos and Los Angeles Chargers have a rivalry that dates back to decades ago, and in 2020, the history between both teams...
View Post
Denver Broncos

In the 2020 NFL Draft, the Denver Broncos made it known to the rest of league that they were building around their second-year quarterback...
View Post
Denver Broncos

Broncos Mailbag: What to expect from Vic Fangio in year 2

As we all patiently wait for training camp at the end of this month, news around the National Football League has been relatively slow....
View Post
Denver Broncos

Strengths and weaknesses of the Broncos 2020 defense

After previously analyzing the strengths and weaknesses of the Broncos offense, it's now time to look at the players projected to make the final...
View Post
© Copyright 2019. Pro Football Network LLC. All Rights Reserved.