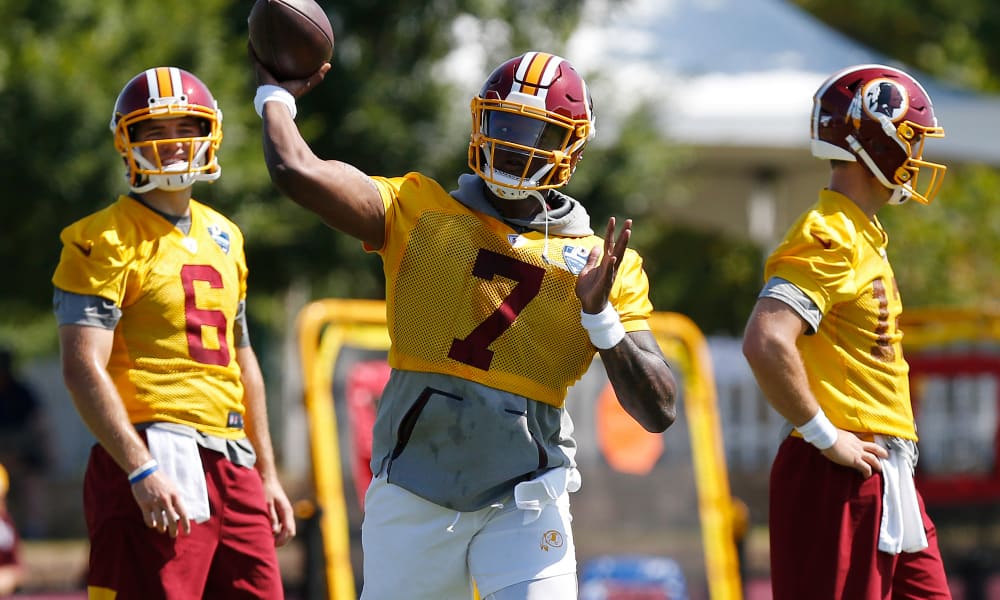 As the Washington training camp starts to unfold, it’s time to examine each position for the Washington Football Team. In this training camp preview, we look at Washington’s quarterbacks. I wanted to start with the QB position because recent news regarding Alex Smith has started up some QB controversy over who will be the starter come the start of the season. There are currently four quarterbacks on the roster at the start of training camp, each with different strengths and levels of experience. With this much talent in the room, and a new offense being installed, there is reason for excitement.

Washington’s four quarterbacks are Dwayne Haskins, Alex Smith, Kyle Allen, and Steven Montez. Montez is an undrafted free agent with great physical tools but was very unrefined and underdeveloped coming out of Colorado. He will likely be kept around as a camp arm, and if he flashes, he’ll likely latch on to a practice squad spot.

Montez struggled with accuracy and consistency in college, and it will take time before he’s ready for any real competition. Not having a preseason could prove detrimental to his chances of impressing the team and sticking around.

The presumed starter for this season, a massive part of the fan-base expects Haskins to be the future of the franchise. He possesses elite arm talent and showed more growth than any rookie passers last year. Over his last three starts, Haskins threw five touchdowns to only one interception and meticulously shredded the Eagles and Giants defense with ease.

Haskins has worked diligently to improve himself this summer. His playing weight last year was around 230 pounds, he’s currently weighing around 215, both dropping unnecessary body fat and building muscle. This figures to help Haskins become more than just a pocket passer, but a dynamic playmaker. We saw last year that he can excel as a runner, especially in his game against Philadelphia.

Haskins garnered a lot of criticism for his play early in the season, specifically for his performance in week four at the Giants. However, his struggles in that game become understandable with context. He received no first or second-team reps in the season, as Case Keenum and Colt McCoy received the live practice reps and Haskins was the scout team quarterback.

How did Haskins look when he took over?

So when Keenum went down with a concussion in Week 4, Haskins was asked to run an offense that he was not prepared to run against a live NFL defense with minimal preparation. The negative play can’t be completely overlooked, but it shouldn’t have major implications on his future.

What should be viewed as an indication for his future is how Haskins progressed throughout last season. That was the brightest point for Washington from start to end (besides maybe the emergence of Terry McLaurin).

Haskins was a different player from his first start to his last, and he did it while being in the worst situation of any starting quarterback in the NFL. With a new, competent coaching staff, the stability could be exactly what he needs to entrench himself as The Washington Football Team’s franchise quarterback for the next decade-plus. Expect Haskins to leave training camp as the indisputable starting quarterback.

I was not expecting Smith to ever play football again, much less stir up some quarterback controversy this season. There are some people who believe a fully healthy Smith would be the starting QB of the Washington Football Team. I don’t agree with this sentiment as it feels like a step backward.

Not only am I dubious that Smith is fully healthy, but head coach Ron Rivera has already expressed that they won’t be chasing cheap wins, starting Smith is doing just that. Similar to why Washington didn’t bring in former Panther Cam Newton after he was released, they need to see what they have in Haskins. Unless Smith is leaps and bounds ahead of him, I find it unlikely he starts as I’m not sure what Smith provides to the team as a starter is greater than what Haskins brings to the table.

What Smith does provide is a steady veteran presence and one of the top back-up quarterbacks in the NFL. Smith’s biggest contribution to the team would be the experience he brings to the QB room. He’s been in the NFL for well over a decade, he’s seen playoff success, regular season failure, Super Bowl dreams, and nearly lost his career to injury. Smith has seen the NFL for all its positives and negatives and that type of experience will be invaluable to pass on to the younger passers.

Smith is heavily credited for the development of Patrick Mahomes, who is now widely considered the best quarterback in the NFL. A best-case scenario would be if he could do the same for Haskins. Almost like a QB coach doubling as a player on the team.

Originally brought in due to a lack of options behind Haskins, Allen will compete for the starting QB position. His experience in the Scott Turner and Rivera offense will be a distinct advantage. Allen was able to lead Carolina to wins last year after Newton went down with an injury, however, the praise should go to the coaching staff and offensive weapons for doing most of the work.

When Turner was announced as the next offensive coordinator for Washington, I watched a lot of Carolina film. One takeaway I had was that Allen was not good last year. He really struggled in his pre-snap process and his accuracy down the field was abysmal. Carolina’s receivers were consistently open, Allen just struggled to connect with them.

With all that being said, I cannot deny the fact that he found ways to win games. Whether or not Allen was the reason they were winning, he wasn’t losing the games for his team. He possesses above-average arm talent and athletic ability and would be a very quality third option on the team. I think Allen is likely the back-up quarterback Week 1 but will be relegated to QB3 if Smith is a full go at any point in the season.

Who will walk away the starter?

The Washington Football Team has one of the more interesting quarterback rooms in the NFL. They theoretically have three players who could be the Week 1 starter when the team takes on Philadelphia at home. As it stands, I expect Haskins to be the starting quarterback for the 2020 season, with Allen acting as the main back-up until Smith is completely healed from his brutal leg injury. Montez is an intriguing physical specimen but is likely only a camp arm or best case scenario a practice squad member.