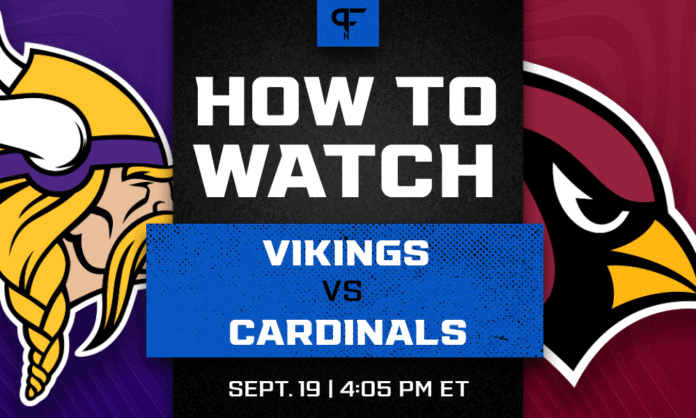 Vikings vs. Cardinals odds, line, prediction, and how to watch the Week 2 game

What are the Vikings vs. Cardinals odds and prediction, what channel is the game on, and how can you stream this Week 2 matchup?

Sunday’s Minnesota Vikings vs. Arizona Cardinals game will feature two teams with drastically different opening week results. While the Cardinals went on the road and dominated a 2020 playoff team in the Titans, the Vikings went on the road and lost in overtime to a Bengals team that has won just six total games over the past two seasons. Let’s take a look at the current NFL odds, the TV channel, how to live stream, and a prediction for the Vikings vs. Cardinals Week 2 matchup.

Minnesota Vikings vs. Arizona Cardinals odds and prediction for Week 2

The Vikings come in 0-1 against the spread after last week’s loss as a road favorite. The Cardinals, on the other hand, come in at 1-0 ATS after winning as a road dog in Tennessee. However, over their last five meetings dating back to 2011, the Vikings are 3-0-2 ATS when taking on Arizona.

The total is set relatively high, but for good reason. The Vikings went over last week’s total in Cincinnati, while the Cardinals didn’t only because they held the Titans to just 13 points. Arizona posted 38 points themselves. Additionally, the over is 4-0 in Minnesota’s last four games and has cashed in each of the Vikings’ last nine games following a defeat.

The Vikings did not look very good last week in their overtime loss to the Bengals — and it goes beyond their ridiculous 12 penalties. Despite outgaining Cincinnati 403 to 366, the offense was not particularly effective. They couldn’t run the football, struggled to convert on 3rd down, and failed to protect quarterback Kirk Cousins. Cousins was not only sacked 3 times but also hit an additional 5 and hurried 9 times.

Defensively, the Vikings could not stop the run. And despite ample pressure on Joe Burrow, they were unable to disrupt the second-year quarterback enough to stop him from averaging 9.6 yards per attempt without a turnover. The defense will have to be much better against one of the most talented offenses in football if they want to avoid dropping to 0-2.

For the Cardinals, everything was just fine last week in Tennessee. They knocked off a team many expect to be one of the best in the AFC, and they did so with ease. Kyler Murray looked like the stud that he is, and he made sure to utilize his new offensive toys in rookie Rondale Moore and veteran A.J. Green. Pairing those two with DeAndre Hopkins and Christian Kirk was hardly fair against an outmatched Titans defense.

But it wasn’t just the passing game clicking, as Chase Edmonds and James Conner combined for 116 rushing yards on 28 carries. If the Vikings aren’t better against the run in this matchup, Edmonds and Conner could once again combine to eclipse 100 yards on the ground.

The biggest surprise of Week 1 may have been Arizona’s ability to contain Tennessee’s offense, a unit loaded with talent at the skill positions. The Cardinals kept the Titans under 250 yards of offense and forced 3 turnovers.

If last week was not a mirage, and Arizona’s defense can repeat its strong performance, it could be a long day for Mike Zimmer’s team. Regardless, expect the Cardinals to score often. It’ll be up to Cousins and the Vikings to keep pace.

How to watch Vikings vs. Cardinals this week