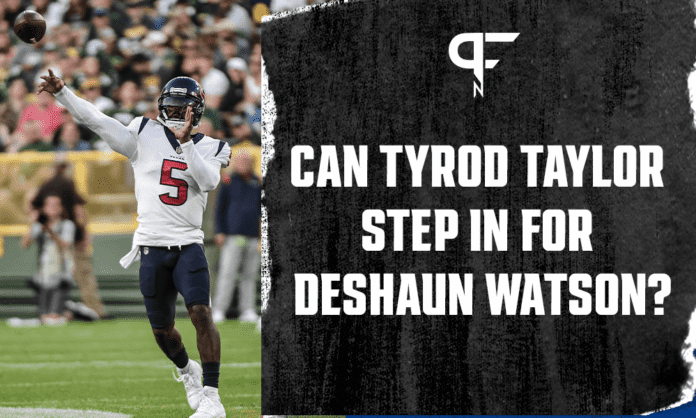 Can Tyrod Taylor step in for Deshaun Watson and help salvage the Houston Texans season?

The Houston Texans are bad, plain and simple. Will Tyrod Taylor save them from being the embarrassment of the NFL in 2021?

By Adam H. Beasley
August 21, 2021
What's in this article? Click to show
Fallout from Deshaun Watson created a mess for the Texans
Can Tyrod Taylor give the city of Houston a glimmer of hope?
We could see Davis Mills if Taylor doesn’t perform

Deshaun Watson will never play another down as the Houston Texans‘ QB. There’s no coming back from the events of the past seven months. If he didn’t have more than 20 sexual misconduct lawsuits pending and criminal and NFL investigations ongoing, he probably would already be gone. Now, could Tyrod Taylor, or even Davis Mills, save them from all-time embarrassment?

Fallout from Deshaun Watson created a mess for the Texans

Watson doesn’t want to be there. And the Texans, by sticking him at scout team safety during practice and making him persona non grata on gameday, would surely wish him gone.

Have you heard of hold-ins — the new craze for stars who want new contracts but are unwilling to swallow the fines that come with holdouts?

Consider this a freeze-out. It’s an ugly scene all the way around.

The Texans will probably be awful as a result. They lost 12 games last year, and Vegas thinks they’ll lose the same in 2022. They have a first-time head coach (David Culley) and a new general manager (Nick Caserio). Houston also signed three dozen veterans to one or two-year contracts.

The only question is if they’re forgettably bad or epically bad.

Can Tyrod Taylor give the city of Houston a glimmer of hope?

Enter Tyrod Taylor. The Texans’ slam-dunk Week 1 starter, who knows a thing or two about navigating less than ideal situations. In a perverse way, his entire (underappreciated) career has prepared him for this moment.

Now 32 years old, Taylor has been the quarterback of, until recently, two of the worst franchises in recent NFL history.

In 2017, he helped lead the Buffalo Bills to their first playoff berth in 17 years. Furthermore, he was the bridge to Baker Mayfield in Cleveland in 2018.

Twice, he’s lost starting jobs to injury (including with the Chargers in 2020, when a team doctor punctured his lung while injecting a pain-killer into his cracked ribs prior to Los Angeles’ Week 2 loss to the Chiefs).

And Taylor cannot expect to be the Texans’ long-term answer, even with a Pro Bowl season. Houston will almost certainly have a Top 5 (Top 1?) pick in 2022 and will want to use that opportunity to find their new franchise quarterback.

That’s assuming Davis Mills, the Stanford product selected by Houston in the third round back in April, doesn’t emerge.

We could see Davis Mills if Taylor doesn’t perform

Mills, who completed 11 of 22 passes for 112 yards and a pick in the Texans’ preseason opener, will probably get a chance to show what he can do in the regular season, particularly if the Texans are as bad as everyone expects.

Caserio will want as much information on what he has in-house at the position before committing to a high draft pick.

“From Day 1 when he got here, that’s been great,” Texans offensive coordinator Tim Kelly said of Mills. “He’s really smart. So he knows what everybody should be doing there. He’s in there. He’s able to articulate the play call, which sometimes for us can be kind of wordy, especially in some of those situational football spots. He’s done a great job in the huddle communicating and all that good stuff.”

But Taylor, who has a career 89.5 passer rating and an impressive 1.4% interception rate, can prolong that audition by continuing to do what he’s always done — provide steady leadership and timely production.

His next opportunity comes Saturday against the Dallas Cowboys. He’ll likely see more than the 10 snaps he played last week against the Green Bay Packers.

“He is even-keeled throughout the entire game,” Kelly said of Taylor. “Throughout highs, lows, it doesn’t matter. He’s going to be the same guy, and that’s a great thing because, again, he’s never going to lose control in terms of being too emotional or getting too high or getting too low. He’s very steady. He’s very consistent.”

And he might be the perfect guy at the less-than-perfect time for the Texans.