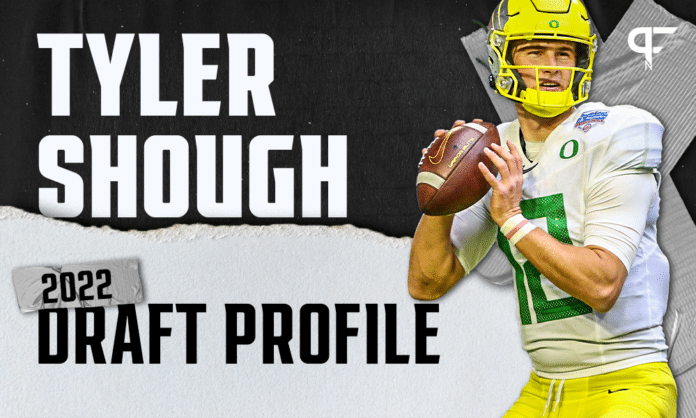 Does Texas Tech QB Tyler Shough have the tools to elevate his scouting report into the early rounds of the 2022 NFL Draft?

Does Texas Tech QB Tyler Shough have an NFL Draft scouting report worthy of more attention in an unsettled quarterback class? The former Oregon passer isn’t viewed in the same light as other early-round signal-callers. However, in time, he could work his way up if things fall his way.

Last year’s quarterback class had a previously established hierarchy at the top but virtually no depth behind that top tier. This year, there’s almost no established top tier but an abundance of depth and potential. Somewhere within that massive depth tier is Texas Tech QB Tyler Shough — an Oregon transfer who boasts intriguing tools on the surface.

As we’ve seen in the past, the Oregon offense can dilute the upside of quarterback prospects. It was a big reason why many evaluators overthought Justin Herbert when he came out. Shough is no Herbert — very few are. But does he have starting upside as an NFL Draft prospect? Let’s take a closer look.

If you’re a fan of the traditional quarterback archetype, Shough passes the initial eye test. Listed at 6’5”, 225 pounds, Shough has a large, sturdy frame. He’s a bit on the lean side, but he’s fairly compact and can withstand contact out on the field.

Within his size, Shough possesses above-average athleticism. He’s athletic enough to evade rushers, roll out, and extend plays. He was also used quite a bit on designed runs for the Ducks. Shough’s not an elite rushing threat, but he’s a physical runner whose size allows him to stay on his feet at times.

On top of his rushing ability, Shough’s arm isn’t a liability. The Texas Tech QB has a crisp throwing motion which can generate solid velocity at times. When he’s in rhythm, he steps into his throws and pushes the ball into open lanes with pace. Shough has enough arm elasticity to create decent velocity while on the run and puts touch on deep passes.

In his limited starting experience, Shough has shown small glimpses of promise as an exceptional passer. Shough has a solid feel for pressure and can navigate the pocket and leak into open space. When rolling out, he keeps his eyes up and identifies seams in the defense. His mobility helps him in this regard, but he’s also shown to have the awareness to use his running ability to draw defenders away from routes.

Going further with Shough’s ability as a passer, the Texas Tech QB is mechanically sound when in rhythm. He channels his traits well as a thrower in structure. He can deliver passes accurately within short range and place for yards after the catch in that third.

Additionally, Shough has displayed he can look off defenders with his eyes at times, particularly on screen plays. This ability shows up less often during full-field reads, but he’s at least flashed the capacity. Moreover, Shough flashes the ability to throw with timing and pace to the intermediate range. Again, being in structure and unobstructed is a key prerequisite for him.

While Shough has some measured upside, there were more negatives than positives in his NFL Draft scouting report upon viewing his tape. Shough has a decent arm, but he visibly strains to put increased velocity on his passes. His velocity doesn’t always carry downfield, and his passes sometimes drop before they reach their intended targets.

Shough doesn’t consistently manipulate trajectory or play to his receiver’s leverage, and his placement can be extremely hit or miss down the field. He sometimes leads the ball into dangerous areas, and his accuracy on the run can be inconsistent. Shough’s decision-making can be suspect as well. He trusts his arm too much when throwing into congestion. As a result, he sometimes passes up safer, more efficient options for bad throws.

Furthermore, Shough’s operational process is noticeably inconsistent. Under pressure, the Texas Tech QB’s footwork erodes, and he throws off his back foot at times. In tense situations, Shough will force throws and put the ball at risk. He sometimes leaves clean pockets too early and doesn’t often stand in and go through his progressions, nor does he consistently throw with anticipation.

Among other things, Shough sometimes fails to see linebackers lurking ahead of routes at the second level. He also stares down his targets, keying in defenders and funneling his focus.

Upon first glance, Shough is appealing as a sleeper pick. He’s big, athletic, and has some measured off-script ability. However, beyond those surface-level traits, there isn’t much starting utility to cling to at this point.

Past the short range, and as he moves farther down the field, Shough is increasingly volatile. He doesn’t have consistent ball placement or precision, and he doesn’t generate enough downfield velocity to hit tight windows before they close.

Shough’s upside appears somewhat limited outside of his athleticism, and even within structure, he has limited utility. He doesn’t consistently go through progressions or throw with anticipation. In rhythm, with a designed short game, Shough can be a good distributor. But it seems as though he is less effective when he’s asked to do more.

If Shough can refine his mental process, he’s an above-average athlete with a decent arm. But as of now — he’s a late Day 3 prospect — and he doesn’t have the elite upside to warrant considerable excitement. A year with the Red Raiders could change that, but Shough has to improve.

While the paradigm is slowly shifting at quarterback, the traditional prototype still holds plenty of appeal. Shough has long had the size to stand out from the crowd. By his senior year in high school, he was a looming 6’5” quarterback prospect, with an impressive 4.88 40-yard dash on record.

Shough was a four-star recruit in the 2018 class and the 266th-ranked recruit overall. The future Texas Tech QB fielded offers from Alabama, Georgia, and Michigan, as well as Ivy League schools like Harvard, Cornell, and Columbia. Nevertheless, Shough — who hailed from Arizona — chose to stay in the west and signed with Oregon.

Shough redshirted his true freshman year at Oregon, then entered the lineup as a redshirt freshman in 2019. It wasn’t his time yet. Instead, he sat on the bench behind future first-round pick and NFL Offensive Rookie of the Year Justin Herbert. Even while Herbert dominated the reps, Shough saw some limited action and showed promise. He threw the ball 15 times, completing 12 passes for 144 yards and 3 scores.

Last year, Herbert entered the draft, and Shough took over the starting job for the Ducks. In a truncated 2020 season, Shough started all of Oregon’s seven games. He completed 106 of 167 passes in those games for 1,559 yards, 13 touchdowns, and 6 interceptions. He also ran the ball 66 times for 271 yards and 2 touchdowns.

Shough could have stayed at Oregon and battled with Anthony Brown for the starting job. But after earning two degrees in three years, Shough decided to further his education — and his football career — elsewhere as a graduate transfer. He ultimately chose Texas Tech as his next QB destination. He has three years of eligibility remaining, but ideally, Shough plays himself into the draft discussion before that.

Shough doesn’t have the elite physical upside that many first-round quarterbacks possess. And while he’s clearly intelligent, his mental process on the field is very much a work in progress. Nevertheless, Shough has a reasonable physical foundation, and he’s flashed solid execution at times. With a stellar year at Texas Tech, Shough could rise up the board and patch up the holes in his scouting report.