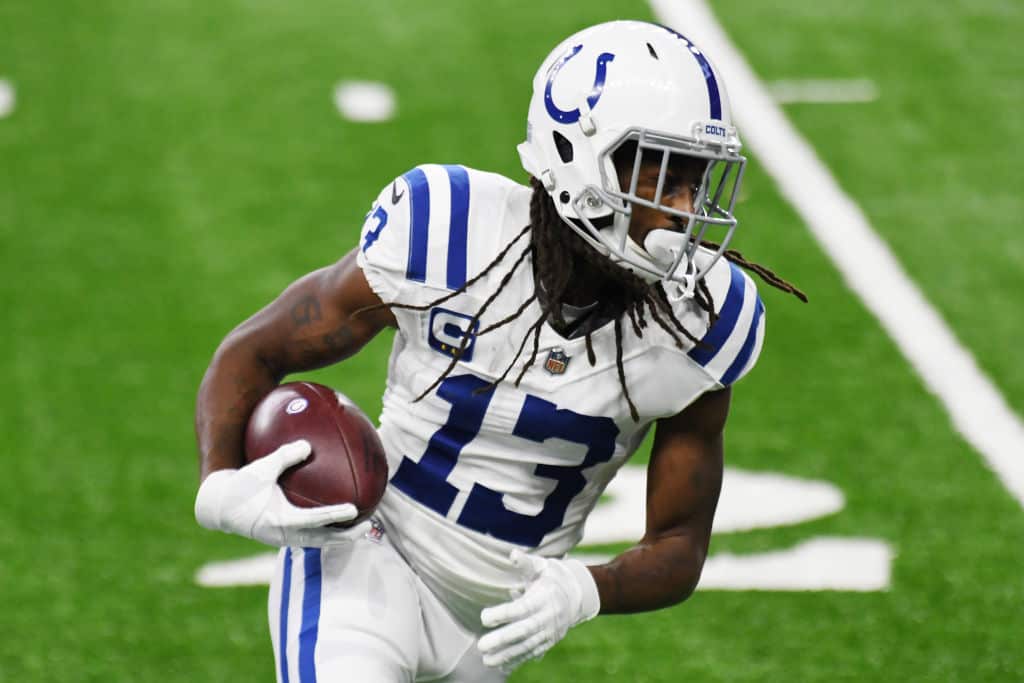 One of the best and worst parts of fantasy football is picking who to start in a given week. There’s no better feeling than making the right pick when playing the underdog over the obvious starter and being right, but there’s no worse feeling than missing out on points by trying to get too cute. This week, one of the toughest decisions for Thursday night is between two of the Indianapolis Colts WR options. Do you start struggling veteran TY Hilton or up and coming rookie Michael Pittman Jr.?

Veteran Colts WR TY Hilton has had a brutal year both on the field and in fantasy lineups. I wrote about Hilton a couple of weeks ago and stand behind the statement that “you can do worse than putting Hilton in your lineup.” I’ll admit that that statement doesn’t exactly instill confidence in Hilton as a WR3 or flex option, but given the randomness of those deeper WR options, he’s still in flex consideration for a lot of fantasy managers.

Through nine weeks, TY Hilton has played in seven games, missing time due to a nagging groin injury. His best outing was in Week 5’s loss to the Cleveland Browns, where he caught six of 10 targets for 69 yards, scoring 12.9 PPR points. This is nearly half of his 27.5 PPR points for the year in a single game.

While he may have dominated in the box score that week, the entire Colts offense struggled in that game. Hilton himself hasn’t exactly looked good since then, catching one pass in Week 6 and two passes in Week 8. He’s practically an afterthought on his own team now that Philip Rivers has other options.

In fantasy scoring, Hilton is ranked as WR90. His 6.7 PPR PPG is even worse, putting him at WR99, far from starting wide receiver numbers. Hilton’s current CS (Consistency Score) of 1.7 paints a very similar picture. He’s WR85 in that metric, alongside boom or bust wide receivers like Keke Coutee, Olamide Zacchaeus, and Marvin Hall.

All of these options are desperation plays and not at all someone fantasy managers can lean on to win them a week. This is definitely not the TY Hilton that fantasy managers and Colts fans alike have come to know over the past nine seasons. Maybe he’s just getting too old to compete?

On the other end of the experience spectrum is rookie Colts WR Michael Pittman Jr. The 2020 second-round pick has played in five games this year, missing time due to a leg injury that required minor surgery. He spent the minimum three weeks on IR but came back for the Week 8 win against the Detroit Lions, where he only saw one target in a game where Rivers threw 33 passes to eleven different receivers. Was the team easing Pittman back in after his injury, or was this a sign of things to come for Pittman’s rookie year?

Week 9 was a different story. Pittman caught four of seven passes for 56 yards in a loss to a tough Baltimore defense, scoring 9.6 PPR points in fantasy. For the season, Pittman only has 27.5 PPR points, so this single week accounts for more than a third of his total fantasy output on the year. Pittman led the team with targets alongside Marcus Johnson, who also got seven looks. It sure looks like the team isn’t afraid to use him, and it’s not surprising for a rookie to struggle out of the gate, so perhaps this is a sign of things to come for the young receiver.

Speaking of which, the Colts WR room has been looking for someone to step up this season, and Pittman could very easily be that guy. The leading fantasy scorer is Zach Pascal, who has 65.7 PPR points, followed by Hilton with 47.1, Johnson with 37.1, and Pittman with 27.5. As a whole, the Colts WR group only has two touchdowns among them, both scored by Pascal. So it’s not exactly like any of them are burning up the scoreboard just yet. If Pittman has finally gotten his act together, and the injury is a thing of the past, can he step up to be the Colts leading WR as the season progresses?

Which Colts WR should you start on Thursday Night Football – TY Hilton or Michael Pittman Jr.?

On Thursday night, the Colts face the division rival Tennessee Titans. The Titans have struggled against the pass this season, allowing an average of 46.63 points to opposing wide receivers. The Titans are third in DPAC (Defensive Points Allowed Consistency), only behind the Seattle Seahawks and New York Giants, meaning they are a great defense for WRs in terms of fantasy matchup. Whoever steps up should have a great night.

Given the way things have been trending lately, I’m predicting Michael Pittman Jr. to be the better option. While TY Hilton has been cleared from the injury report ahead of Thursday’s game, it’s clear from his performance this year that he’s lost a step. The 31-year-old receiver is starting to play like it, and I’d rather not put him in my lineup this week in case his struggles continue.

Pittman, on the other hand, could be a stellar option if he truly has turned the corner. While Hilton is trending down, Pittman is trending up, and on Thursday games, I almost always prefer the option with more upside. If he goes off and scores a lot, you get to head into Sunday with a lead and can play more conservatively. If he doesn’t do as well, you’ve likely got other options to dig yourself out of a hole. Hilton’s low floor and low ceiling aren’t appealing to me at all, but Pittman’s 15+ PPR ceiling is something I would have a hard time benching. Give me Pittman and let Hilton ride the pine another week, just to be safe.