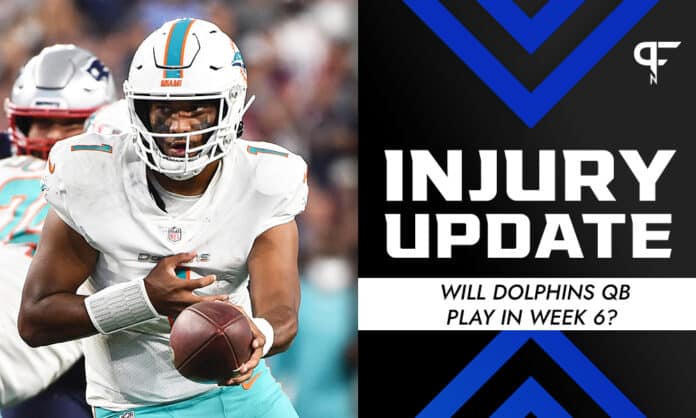 With Dolphins QB Tua Tagovailoa designated for return in Week 6, what does that mean for his availability in London against the Jaguars?

By Ben Rolfe
October 15, 2021
What's in this article? Click to show
Tua Tagovailoa was designated to return from IR ahead of Week 6
The Dolphins need to win in London in Week 6
What would Tua’s return mean from a fantasy perspective?
Could the Dolphins be cautious with their QB in Week 6?

The Miami Dolphins lost franchise QB Tua Tagovailoa with a rib injury in Week 2. With Tua being placed on the injured reserve on September 25, the hope was that he could return when eligible in Week 6. Is Tua still on track to return in Week 6, or will the Dolphins have to roll with a different QB in London?

Update 10/15/21: Head coach Brian Flores has said that if Tua Tagovailoa practices today, he will be expected to start in London on Sunday.

BREAKING: As long as Tua practices as expected today, he’ll be the starter on Sunday #FinsUp pic.twitter.com/7m3QXKMol1

There have been a lot of positive signs that Tua will be under center for the Dolphins in London. On Monday, head coach Brian Flores remarked that Tua has been throwing and doing well. He also commented how he hoped to have the No. 5 overall selection from 2020 back under center for Week 6.

That positivity in the head coach was then enhanced when Tua was designated to return to practice on Tuesday, ahead of the Dolphins’ first practice of the week on Wednesday. However, this move does not mean that it is a certainty that Tua will be on the field at Tottenham Hotspur Stadium Sunday. The Dolphins now have three weeks in which to add Tua to their 53-man roster.

The Dolphins need to win in London in Week 6

Miami has a delicate balance to thread with Tua and his injury. On one hand, if Tua is still viewed as the future of the franchise (which is dubious given their reported interest in Deshaun Watson), rushing him back onto the field could do more long-term harm.

However, at 1-4, the Dolphins’ season hangs in the balance. With that record, the futures of GM Chris Grier and HC Brian Flores are also at stake. After promising signs in 2019 and 2020, the wheels have seemingly fallen off in 2021. If the Dolphins lose to the Jaguars, it could be the final nail for both Grier and Flores.

At 1-5, the Dolphins could be four games out of first place in the division and at least two games out of the Wild Card race. By no means would the season be over, but the alarm bells would be ringing. With Jacoby Brissett 0-3 as a starter, turning to Tua at QB might be the Dolphins’ best option.

In a 16-game season, with a 14-team playoff format, teams starting 1-5 would have made the playoffs approximately 5% of the time. In a 17-game season, you would expect the chances of that to rise a little, but not much.

What would Tua’s return mean from a fantasy perspective?

Honestly, this is hard to judge. The Dolphins’ offensive play-calling has received much criticism, and regardless of who is under center, that remains a limiting factor.

With DeVante Parker out in Week 5, the Dolphins leaned heavily on Myles Gaskin, Mike Gesicki, Jaylen Waddle, and Preston Williams. Somewhat unsurprisingly, Waddle has been the Dolphins’ most valuable player this season according to PFN’s Offensive Value Metric.

With Tua under center in Week 1, Parker, Waddle, and Gaskin led the team in targets. Assuming Parker is back, those three should remain the mainstays of this passing attack. If Parker is out, Williams will have some deep-level fantasy value in Week 6.

What happens with Gesicki is somewhat more of a question mark. Tua targeted him just 3 times in Week 1. In contrast, Brissett has targeted him 25 times for 19 receptions in the last three weeks. Is involving Gesicki an offensive mindset shift or a QB-driven shift? We’ll have to wait and see. Consequently, that uncertainty makes it tough to trust Gesicki as a potential Week 6 starting fantasy option.

Could the Dolphins be cautious with their QB in Week 6?

With Tua potentially returning but not 100%, the concerns are that the Dolphins try to protect him with short passes. The Dolphins’ offensive line is a major concern, and they appear to need no encouragement to run a close-to-the-line-of-scrimmage passing game.

Furthermore, the Jaguars are tied for the second-fewest sacks and have not been proficient at getting to the QB. However, they rank sixth in the league in pressure rate (27.5% of dropbacks) and eighth in QB knockdowns (11%).

That all means that Waddle, Gaskin, Gesicki, Parker, and Williams will likely have to make plays with the ball in their hands if fantasy managers are to have success from them in Week 6. There is a lot of risk in trusting any Dolphins player this week, especially if Tua is under center but not 100%.