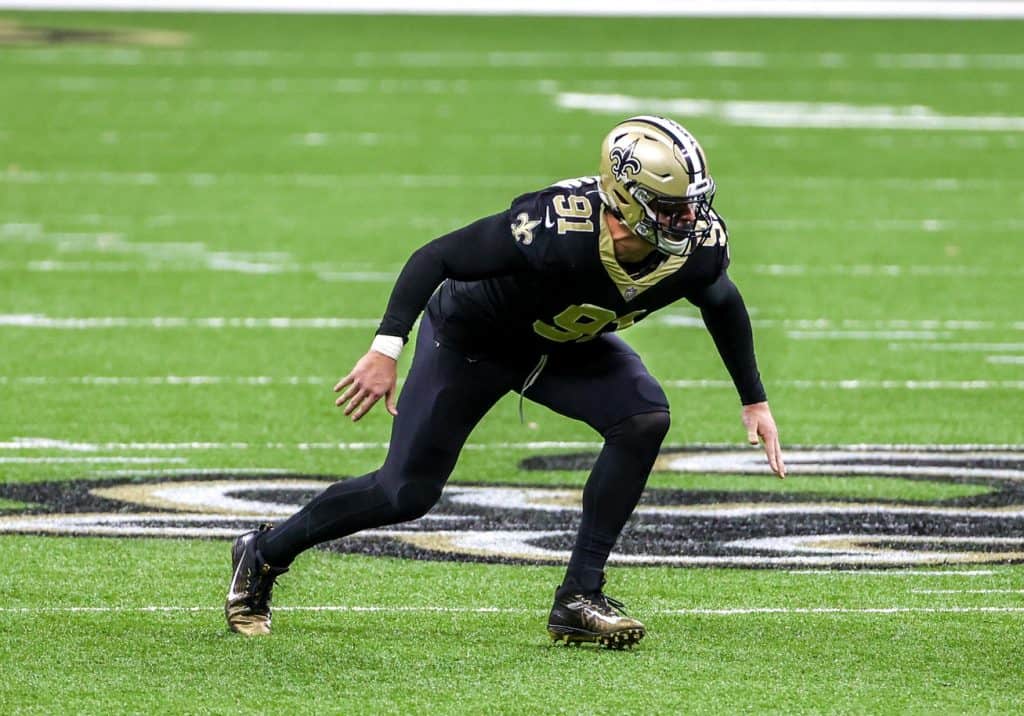 In the NFL, time and time again, we see teams with disruptors on the edge being the make-or-break aspect of a contending team. If you can generate a pass rush, it hides deficiencies in the secondary. This is one reason the Saints were able to go 12-4 even though they have massive holes in their secondary. DE Trey Hendrickson was a menace in the backfield all season long but does not yet carry the name recognition. However, they know him in NFL front offices, and those are the guys signing the checks.

Playing in 15 games, Trey Hendrickson led the team with 13.5 sacks, tied with Aaron Donald for second in the NFL. Additionally, he was first on the team in QB hits with 25. Paired with Cameron Jordan, the duo has been incredible off the edge. As a first-year full-time starter, Hendrickson put the NFL on notice.

At only 26, Trey Hendrickson is just now getting into his prime. He is a high-motor player off the edge who is just as dangerous in the run defense as he is getting after the QB. With free agency merely hours away, I will not be surprised if Trey Hendrickson receives the highest contract for a DE because of how much better he will instantly make his new landing spot.

Due to lost revenue of the 2020 season, the NFL salary cap took a massive hit. Adam Schefter recently reported the 2021 salary cap would be $182.5 million. Teams are cash-strapped and need to make difficult decisions regarding veterans and how bullish they can be in free agency.

Overall, it is not a good year to be a free agent. After consistent growth to the salary cap, no one could have predicted the global health situation. Even someone as talented as Trey Hendrickson could feel these effects in free agency. According to Spotrac, Hendrickson carries an estimated value of $10.3 million on a three-year, $30.974 million contract. The two things working against him are the reduced cap and length of the production.

As I noted earlier, while phenomenal, he was a first-year starter. Could NFL teams view this as a flash-in-the-pan situation?

As he hits free agency, where are some potential landing spots for DE Trey Hendrickson in 2021?

The Saints need to bring back 2021 free agent Trey Hendrickson

I would be remiss if I did not start with the team likely to lose him. If there is any way Mickey Loomis can pull off another cap miracle, this would be a good time to do so. Drew Brees’ contract restructuring and retirement freed up some cap space, but it is still a dire situation for the Saints. Currently, they are an estimated $3.190 million over the cap with several other needs.

The issue is I don’t see a way they can get this done. The New Orleans Saints do not have the wiggle room to get into a bidding war to re-sign Trey Hendrickson. But, I could be wrong.

The Jacksonville Jaguars could make a splash in free agency by signing DE Trey Hendrickson. Jacksonville needs help up front after registering the second-lowest sack total in the NFL in 2020. Josh Allen (the other guy) went from a Pro Bowl rookie season to just 2.5 sacks in eight games in 2020. Taven Bryan and K’Lavon Chaisson combined for just 1.5 sacks and 15 QB hits.

While at Ohio State, Urban Meyer always had dominant edge rushers, and Trey Hendrickson fits the mold. Sitting with $70.194 million in cap space, the Jaguars are a landing spot to watch out for when Trey Hendrickson rumors begin to heat up during free agency.

With $69.89 million in cap space to play with, the Jets can make some aggressive moves this offseason. Head coach Robert Saleh is a defensive-minded coach and knows the importance of building out the front seven. After all, that is what made San Francisco so dangerous.

The Jets have Quinnen Williams in the middle and could flank him with rotational edge rushers in John Franklin-Myers and Tarell Basham, but Trey Hendrickson would be the premier rusher on that line.

In addition, PFN’s Chief Draft Analyst and NFL Insider Tony Pauline reported back on February 23 that the Jets were potentially interested in bringing in Hendrickson. “Personally, I believe the best fit would not be in the draft, rather it would be free agent Trey Hendrickson.”

Cincinnati will be big players for Trey Hendrickson in free agency

A league-worst 17 sacks in 2020, the Cincinnati Bengals desperately need help generating a rush. Only three players for the Bengals were able to record multiple sacks in 2020 — Carl Lawson (5.5), Sam Hubbard (2.0), and Jordan Evans (2.0).

D.J. Reader missed part of the season but bringing in Trey Hendrickson could be a massive shot in the arm for the up-and-coming Bengals. Cincinnati has $44.11 million in cap space to play with and should be receptive to being the landing spot for Trey Hendrickson in free agency.