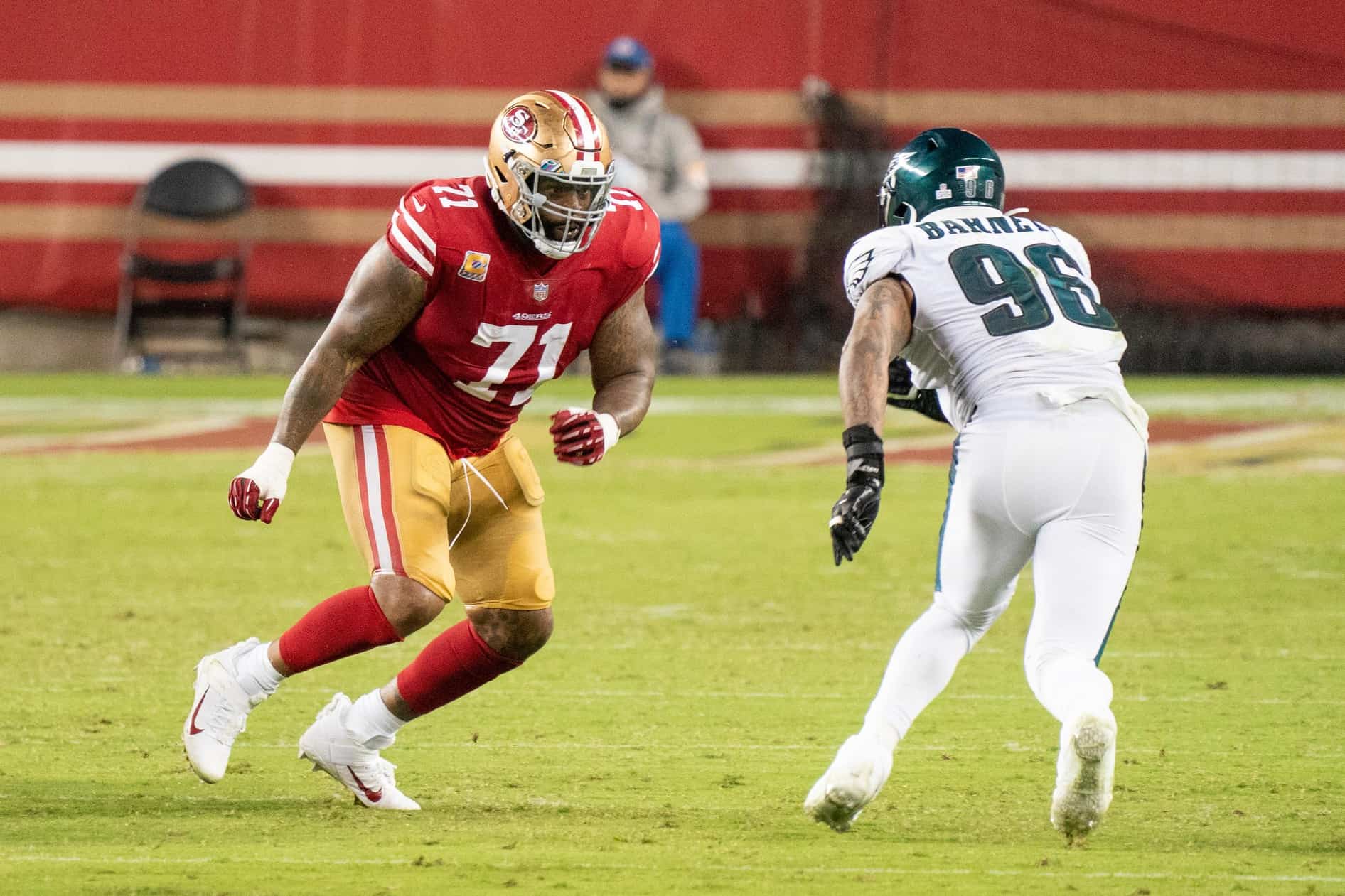 The San Francisco 49ers want to keep him. His teammates want him to stay. It even sounds like there’s mutual interest in his return. However, if he hits the NFL‘s open market on Wednesday, where are some landing spots for 49ers left tackle Trent Williams?

The fourth overall pick of the 2010 NFL Draft has become one of the best offensive tackles in the NFL. An eight-time Pro Bowler for the Washington Football Team and San Francisco 49ers, he could be set for a mega-money deal in free agency.

Without making him sound like a gold digger, that’s the main motivation behind him even testing the waters. The 49ers want him back. The 6’5″, 320-pound behemoth is happy in San Francisco. On the other hand, he wants to find out his value, and the only way to truly ascertain that is to hit the open market.

Franchise left tackles hitting free agency is a rarity. As a result, he’ll be a valuable commodity. Where are some potential landing spots for Trent Williams?

Of all the landing spots for Trent Williams, this one makes the most sense. The Indianapolis Colts have amongst the most cap space in the NFL, so they have the capital to get it done. They’re in the market for a left tackle following the departure of Anthony Castonzo.

They could genuinely be a Super Bowl contender if they can rejuvenate Carson Wentz’s career. Keeping him upright will be a key part of that equation, which is where Williams protecting his blindside would be a huge boost. The former Philadelphia Eagles starter was the most sacked quarterback in the 2020 season.

Although it is an exceptional offensive tackle class in the 2021 NFL Draft, the Colts currently sit at 21. That likely means they will miss out on possibly the best three tackles in the class. Having Williams already in the building means they could use that selection to add Wentz some additional weaponry.

The Los Angeles Chargers have found their face of the franchise in Justin Herbert. Now, they need to ensure they protect him better than they did in the last years of Philip Rivers’ career. Furthermore, Herbert was the ninth-most sacked quarterback last season. Only for so long can he take that level of punishment, as Joe Burrow’s injury for the Cincinnati Bengals last season will echo.

The Chargers act as a solid landing spot for Trent Williams for two reasons. First, the pass protection element of his game will be beneficial for Justin Herbert. Second, his experience in San Francisco’s offense means he can be a weapon in the ground game, too. The Chargers invested in Austin Ekeler last summer, and Williams will help ensure they get a return on their investment in the running back.

Per Spotrac, the Chargers currently have the fourth-most available cap space in the NFL. As a result, it wouldn’t be a surprise to find them in the market for at least one or two pieces across the offensive line in free agency.

Could the Cincinnati Bengals build “Williams bookends” to protect Burrow?

Speaking of Joe Burrow’s injury, the Bengals are a team that also needs to address the offensive line this offseason dramatically. The general consensus is that they will draft Oregon offensive tackle Penei Sewell with the fifth overall selection, if available. Although it seems an entirely realistic proposition that Sewell will be available, what if he isn’t? What is plan B for the Bengals to protect Burrow’s blindside?

Well, what if they found that solution in advance of the draft? The Bengals could be a legitimate landing spot for Trent Williams. He could occupy the left tackle spot; Jonah Williams would then fill the right tackle role.

Thus, the Bengals have the Williams bookends as the foundation of their offensive line. That strategy would allow Cincinnati to use the fifth spot in the 2021 NFL Draft to provide Burrow an offensive weapon such as Kyle Pitts.

A raft of teams are in the market for offensive tackle help. The Las Vegas Raiders, for example, recently traded away right tackle Trent Brown. They could slide Kolton Miller across to right tackle and have Williams at left tackle.

Although the Jacksonville Jaguars recently franchise-tagged Cam Robinson, they’re a team that consistently is linked to Williams. Additionally, the Kansas City Chiefs released both Eric Fisher and Mitchell Schwartz last week. Although they could use a tackle of Williams’ caliber, the likelihood is that they’re financially out of the running.

Finally, the San Francisco 49ers want to keep Williams, and it appears he wants to stay. The most likely solution is that he stays at home in San Francisco. However, that would take a huge chunk of their remaining cap space. They already have 63 players under contract per Spotrac.

What is Trent Williams’ market value in free agency?

Trent Williams could command up to $18.2 million per year, which would restrict his landing spots. As suggested above, that would put the Chiefs out of the running for his services. The rest of the teams mentioned above would be able to afford that. It would serve as a wise investment for a team like the Chargers and Bengals with a young quarterback to protect.

That deal would make him the third-highest paid offensive tackle in the league. Currently, only Laremy Tunsil and David Bakhtiari have higher value contracts.

Oliver Hodgkinson is an NFL Draft analyst and staff writer for Pro Football Network. You can follow him on Twitter at @ojhodgkinson.